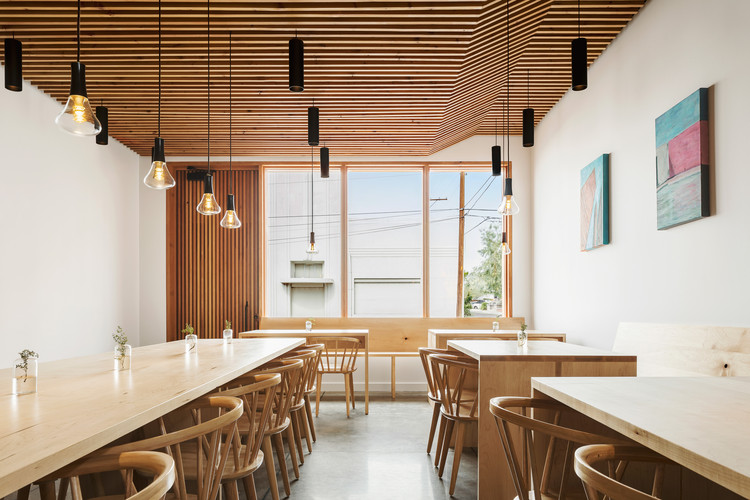 Text description provided by the architects. Anello is a project that is rooted in the concepts found in Wabi Sabi, embracing the beauty found within imperfections. Using this concept and logic, Chef/Owner Scott Girod, who has spent time living in both Japan and in Italy and mentored under Chris Bianco of the world-famous Pizzeria Bianco, opened Anello within a historical building dating back to the end of the 19th century in the heart of the old warehouse district in Tucson, Arizona. The project occupies one of five small “shotgun” style spaces housed within the historical building.

The limited square footage of the space allowed for an extra sense of intimacy that the project was searching for in terms of the overall warmth & experiential feeling, aiming to have a space that was both intimate and inviting for its Tucson community that was designated as the first UNESCO City of Gastronomy in the United States in 2015. The spatial organization of the project is centered around two things, the first being the hand-made brick pizza oven that was shipped directly from Naples.

The oven serves as the “hearth” of the space and the main focal point, drawing the attention of the diners to the warm glow that comes from the grey plastered un-tiled oven. When asked why the owner decided not to tile the oven which is typical in most pizzerias, chef Scott Girod simply replied that he, “wanted everyone to see the oven age over time”, again reiterating the concepts found in Wabi-Sabi. The second object that helps to organize the space is the long twelve-person communal dining table that was custom designed and made from hard maple for space.

This idea of communal dining aims to provide a space for people to come together and focus on the daily ritual of the meals that are shared. The project selected a minimalistic set of materials to curate the space. Rough sawn Douglas Fir was used to add warmth by using the material for the custom-designed storefront, main entry door, windows, and ceiling. Smooth finished hardwood Maple was used for the custom furnishings such as the tables and bench seating. Hardwood hickory was used for the accent furnishing pieces such as shelving and the pizza counter.

Black powder-coated steel round rod was used to make the framing for the shelving systems, and a custom-designed tile that references the frescos found within the local San Xavier Mission that dates back to the 17th century was used in the restroom to add color and subtle playfulness within the minimalistic interior. A key architectural feature of the space is the dynamic Douglas Fir ceiling that serves to address multiple conditions within the space. The ceiling serves to mitigate and balance the acoustics of the space through the spacing of the wood slats and by the rough sawn texture of the material. The wood ceiling also serves to conceal all mechanical and electrical systems that rest above the ceiling.

The geometry of the ceiling allowed to reveal windows that had been previously hidden. Lastly, the ceiling serves as an extension of the oversized entry door that uses a similar approach to the slatted aesthetic of the Douglas Fir. The interior lighting of the space uses a combination of soft spotlighting to provide consistent lighting throughout the space while also using a hybrid table lamp that allows for a subtle ambient & atmospheric glow that resembles subtleties that come from candlelight. The exterior of the building uses a soft red neon light that is housed in a custom fixture, this neon light washes the historic red brick of the building to create a soft glow that mimics the fire coming from the oven. Finally, the red glow of the neon light also serves as the “sign” for space, announcing to the Tucson community that the space is ready to serve them. 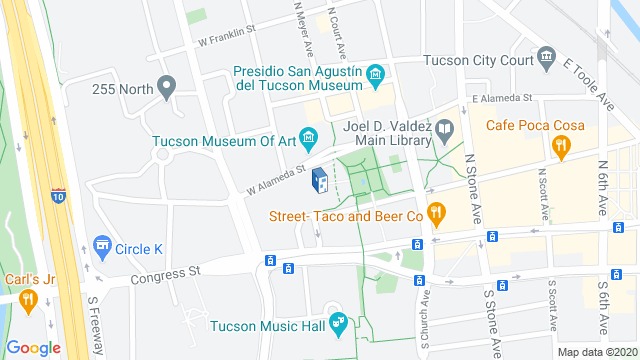