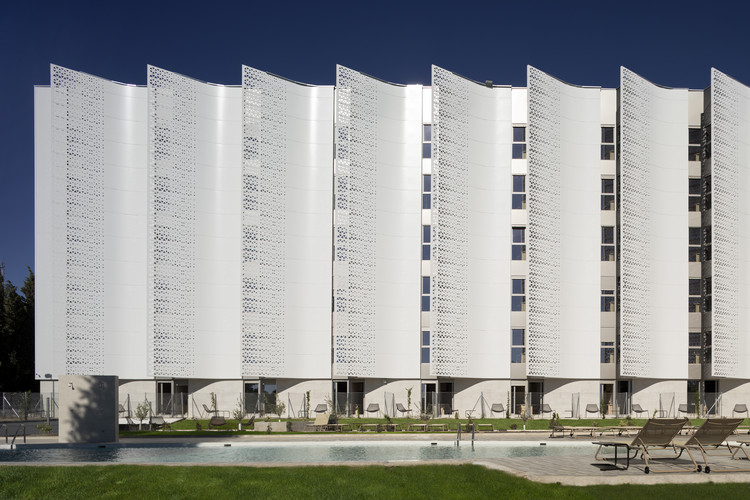 Text description provided by the architects. The first time we visited the site, the spiritual retreat house of a religious community emerged from it. We climbed onto the roof of a four-story building with no protection other than a four-inch overhang on the perimeter and we were struck by the sight. From that eerie elevated, unprotected position, we seemed to dominate the entire valley. Sierra Nevada, the Alhambra, the Cartuja, the red roofs of the building that dotted the urban area, the extensive plain...

That vision lead the project from the first sketches. How could we capture that immensity when raising such a large and resounding building, capable of housing the 419 rooms of the program? How to place an immense piece, so robust that it was able to resist any quake, and yet making it light, elegant, ephemeral ...

The views over the Granada city and valley were astonishing but also really challenged by a very aggressive sun bathing. In order to avoid the impact of a 92m long and 6 storeys height, we shaped the project into a sort of three arms star, curving its footprint to smooth the perspectives. The most exposed façade was designed using a cracked pattern allowing us to turn the windows off the flat line, and protecting them with long perforated scales. Their function were to protect the windows from an overly aggressive afternoon sun without giving up the fascinating views. It is presented as a tribute to Mozarabic architecture, so typical from Granada, so rich in its play of light and shadow. The challenge was not to fall into a crude imitation, but to transcend the geometric catalog of Mudejar motifs without losing the force of the light filtered through the small holes. Thus, a set of triangular perforations is intuited that, due to the need to adapt to the technical and structural requirements of the material, is finally defined by a small parametric algorithm of plastic genesis.

The result is a thousand buildings in one. It changes with the entire path of the sun, when the shadows create new patterns on the white cloths. It shines like mother-of-pearl in the solar zenith and turns golden in the sunset. And between one and the other, thousands of shapes like when you shake the crystals of a kaleidoscope.

Young people will surely be attracted to the pool… .That strange turquoise shape that invites you to swim from a soft ramp bathed by water. Like a beach. The pristine white of the exterior contrasts with the warmth of the interiors. The rooms are dressed in blond wood and the social spaces are inspired by the bright colors of the typical Granada ceramics. 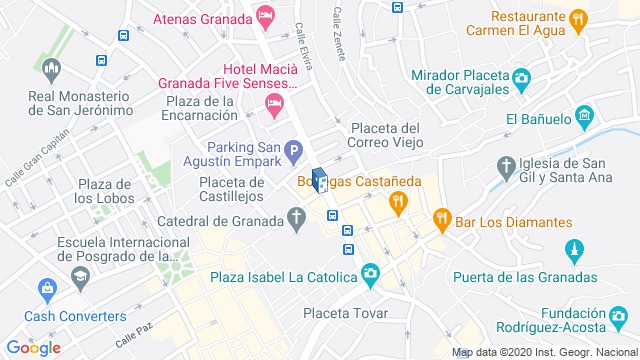 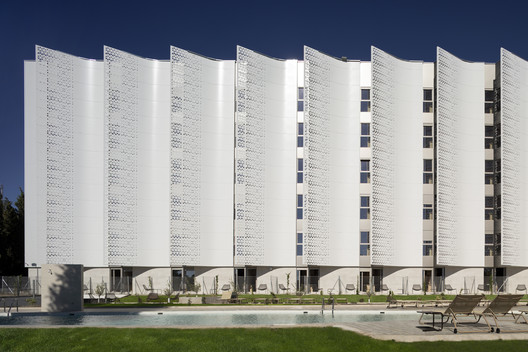