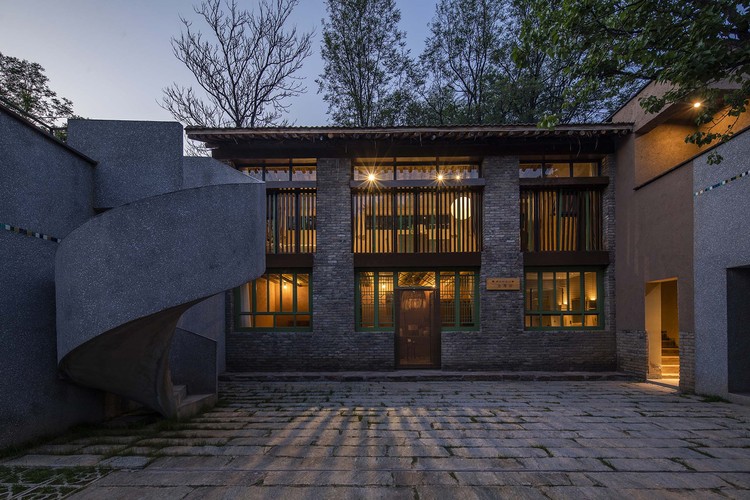 The Site: Once the Red Army bank
The old village of Hanhonggou used to be the site of the later troops of Taiyue Military Region during the Anti-Japanese War. The old courtyard where the project is located was once a bank, which added some legendary color to the project.

Located at the end of the village, the location is private and quiet. The north side is the hillside, and the south side is facing the original flood discharge ditch, with a relatively open view. There are three independent courtyards on the original site. The courtyard pattern is regular, the main rooms are two-storeyed, and the shape is typical three-bay rooms in Qinyuan area: People live on the first floor, and grain and sundries are stored on the second floor. The wing-rooms are single-storeyed, most of which have been damaged for long years out of repair. So, it's hard to have a whole impression of the original architecture. Before the transformation, the three courtyards had been idle for many years, and the aborigines had already moved to the new village, where the property rights had been transferred to the village collective.

Layout: Open up the Courtyards and Reconstruct the Space
The new function determines that the original pattern of three isolated courtyards will be broken up and reorganized. Homestay is different from residential, it needs public service area, front desk, a certain number of guest rooms and logistics, and service convenient is necessary.

The design strategy is divided into several steps: first, after the evaluation of the original buildings, the houses that are well preserved and can continue to be used are preserved and repaired, and the buildings that can no longer be used are demolished. Then, the partition walls between the three courtyards are removed to connect the site into one, and the entrance and traffic flow lines are reorganized. Then, according to the landscape and functional organization of the new site, a new monomer building is built to reconstruct the site together with the reserved building.

After the completion, the spatial relationship between the original main rooms and the new wing rooms is still preserved. The main rooms are two stories high and the position is unchanged. The new wing rooms are on the subordinate position. However, the spatial pattern does not stick to the original appearance. By using the newly built wing room, the streamline and outdoor space of the space are reconstructed. At the same time, using modern forms and new materials, the new and old buildings form a dramatic dialogue relationship. 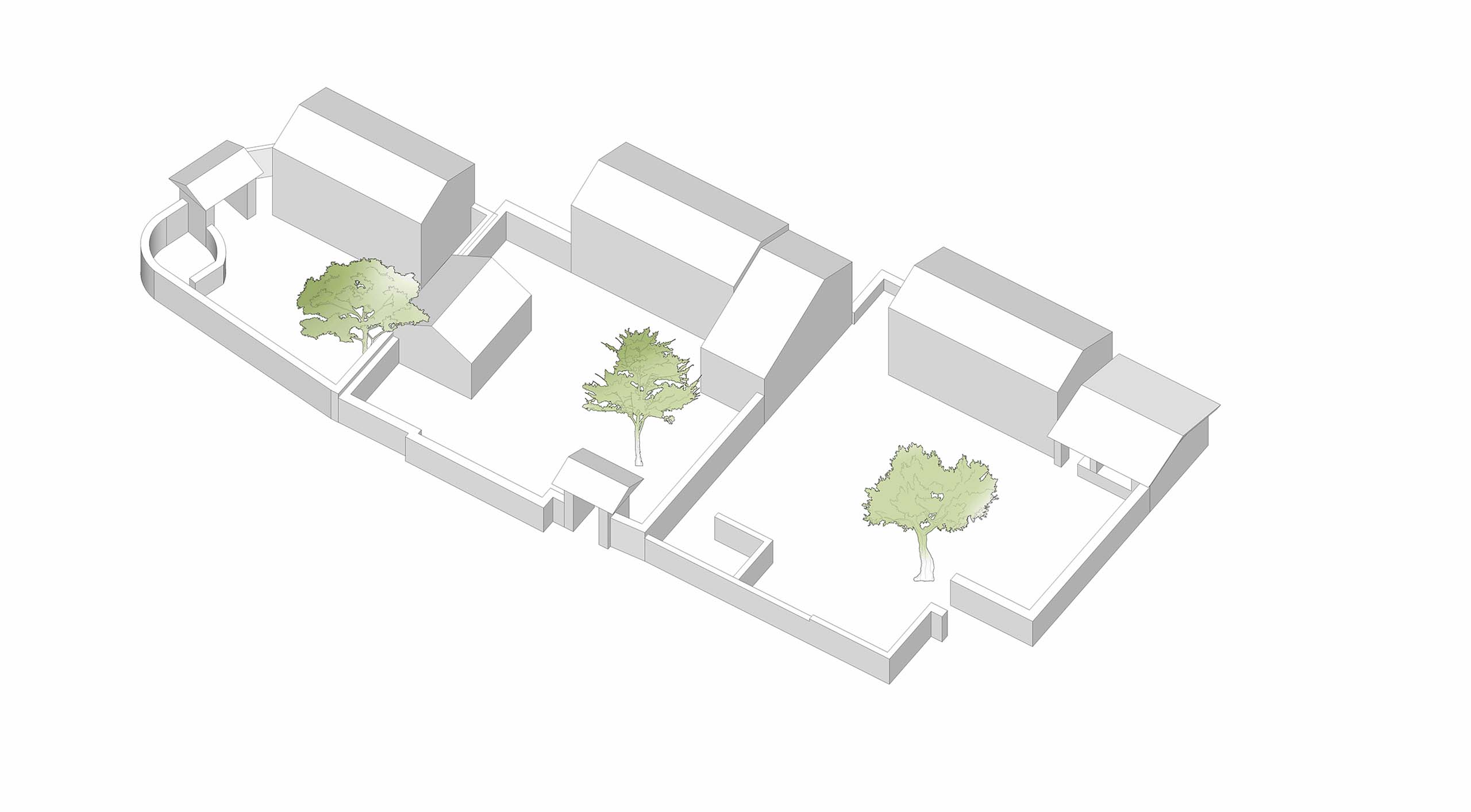 Architecture: Patio, Terrace, Adobe Brick, Granitic Plaster and Ceramic Tile
The architectural design continues the logic of layout. The main rooms are either preserved and repaired, or rebuilt according to their original appearance, occupying a prominent position in the space. The regional nature of the form declares the context relationship between the homestay and the site. The main room in the entrance courtyard is the front desk of homestay, and the two main rooms behind are guest rooms. The second floor of the main rooms is no longer a space for storing sundries. They are transformed into guest rooms, but the traditional grid form of the facade is retained, which reflects the style and features of traditional residential buildings in Qinyuan area. The adobe bricks of the original building are inherited, and the new adobe brick walls made according to the traditional technology not only evoke the memory of history, but also have a sense of decoration.

The new wing rooms adopt the flat roof form, which is more abstract and modern, and provides more and more abundant outdoor space (platform on the second floor) for homestay. In order to ensure the privacy of the guest rooms on the first floor, the newly-built guest rooms have their own courtyards or patios. The building opens large windows towards the courtyard or patio to form a small world of internal view.

Instead of local materials, the building facade uses granitic plaster. This is not only an expression of the memories of the 1980s, but also of the memories of the architect himself. The gray gravel texture and the adobe wall of the old building form a soft contrast, with no conflict but a sense of depth. The treatment of color mosaic strip is not only a kind of homage to Carlo Scarpa, but also corresponds to the proposition of rural tile facade. The architect hopes to arouse a kind of reflection on the facade of rural tile, not simple criticizing, but rational thinking and solution finding.

Interior: Corny and Trendy at the Same Time
From the design logic, the interior is the continuation of the architecture. The architect hopes to create a sense of coexistence of local and fashion, which can not only reflect the regional characteristics of Shanxi Province, but also meet the aesthetic and comfort requirements of contemporary people.

The organization of guest room space is arranged according to the area and location of guest rooms, which is in line with the needs of contemporary holiday homestay. In the new building, the ceiling of guest rooms uses dark color interface to make the space back. The ground uses gray nano-engineered cement, which gives people a cool sense of fashion on the basis of ensuring cleanliness. The wall surface is white, which ensures the indoor brightness. The old building’s guest room ceiling retains the original building ceiling shape, with the wooden structure exposed. And the floor uses warm-toned solid wood floor or antique brick, giving a warm and comfortable feeling. The wall is painted with loess color, which adds nostalgia to the indoor atmosphere and conforms to the local residential characteristics.

There are several different ways to treat the beds, including Kang (heatable brick bed in North China), standard bed and platform. Kang is used in the guest rooms on the first floor of the old building, and standard beds are used in the guest rooms on the second floor which are transformed from storage space, while most of the newly-built guest rooms are equipped with platform. Such treatment not only meets the occupancy experience of different users, but also facilitates the flexible organization of room occupancy form, and the conversion between king room and standard room.

In order to improve the integrity of the design, for furniture and soft decoration the same style is chosen. Local materials such as rubble, solid wood, herbaceous braided fabric and coarse cloth are widely used, but they are carefully selected, matched and processed, showing a state of "finely cooked coarse grain". Color also directly affects the final effect of the interior. Different rooms use different theme colors, which also correspond to the appearance color of the building. Cushion, carpet, wall decoration and other soft clothing with rich and bright colors, enliven the atmosphere as jumping color spots in the space. 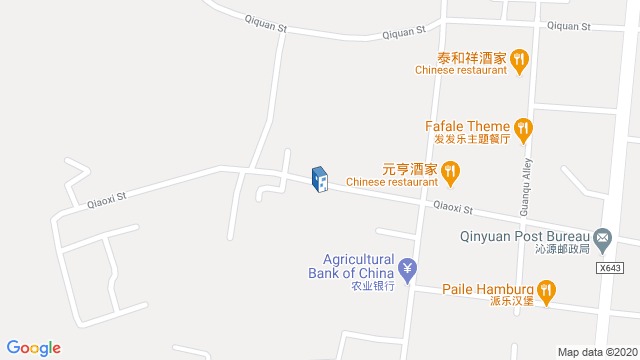 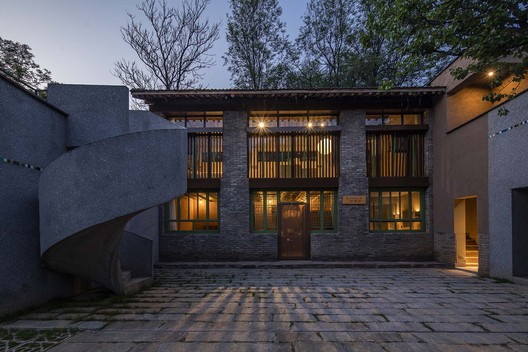