Save
The Hutong Renovation in Beijing: Reimagining Tiny Spaces in a Historic Neighbourhood
Share
Or
Copy

Along these streets, the Yuan aristocracy and high-ranking army officials, granted lands as their estates in the royal city of Beijing, started to build courtyards around the walls. These courtyards are now known as “Siheyuan”. Later during the Ming and Qing Dynasty, the number of Hutongs in Beijing grew exponentially, as their owners kept changing and new additions and renovations were constantly taking place in a haphazard manner.

In the 20th century, under the influence of nationalism and communism, people were encouraged to live collectively. Furthermore, people were prone to leave the countryside for the city centers, because of the booming job markets in developing areas like Beijing. The miniature nature of Hutong, ever since its conception, has offered a sense of comfort and intimacy within increasingly densified and gentrified surroundings. Typically, these Hutongs, in back-alley buildings, can house 4 to 5 families sharing a courtyard as a public space.

Today, Hutongs are considered as a dying architectural typology in China, struggling to fit into the fast-changing urban context. Fortunately, many Chinese and international architects and designers are stepping in to give these old structures a makeover, paying respect to the history and celebrating the memories of the city currently under rapid urbanization.

Hu Yue Studio, aiming to accommodate the Hutong residents’ daily needs under exploding population and chaotic building additions, completed a renovation project in No. 8 Courtyard and No. 19 Courtyard at Caichangdi, in the East District of Beijing, in 2015.

The architect attempted to preserve the spatial layout of the traditional courtyards by partially demolishing and expanding the existing structure. By doing so, he hoped to bring harmony and dignity back into the long-neglected Hutong, especially during recent urban developments.

Several rooms with doors facing the No. 8 Courtyard were demolished, redesigned, and reintegrated into a new multifunctional space. Connected with the existing two spaces, and oriented towards the east and the west, the new structure is a box-like building that not only enlarges and enhances the courtyard area but also generates a patio that allows residents to enjoy the scenery of traditional hutongs and lanes while standing on higher ground.

The architect also transformed No. 19 Courtyard, which used to be a single yard with double entrances, into two individual entities, with the east smaller one for private use, and the north larger space for public use. The new addition is also a contemporary box volume that linked the existing buildings together for a better commute. In the new design, the traditional courtyard layout is preserved, and enhanced lighting is introduced with the use of windows and atriums.

The conversion of No. 28 Dayuan Hutong, titled ‘Miniature Beijing’, is Atelier Li Xinggang’s recent project, completed in 2017, and located in the old town of Beijing. The renovation of this hutong space was based on a concept generated from three hierarchies, “miniature yard”, “miniature community”, and “miniature Beijing".

The architect also was inspired by three scales, from the individual family space and a co-living courtyard to a public entity in urban areas. As a design result, a common courtyard house of 262 square meters was transformed into five apartments with self-contained courtyards, as well as a public space that hosts a café and tea house.

In this project, multiple linear concrete structural units were inserted to provide support within the courtyard complex. Each apartment contains a courtyard, varying in size and shape. Moreover, benefitting from the open view of the garden, the main living room of each apartment is spacious and bright.

If you travel further south along the main ally way and pass the café and tea house, you will reach a small public garden at the rear, and arrive at a pavilion platform, elevated above the courtyard with a set of concrete steps on the side. Actually, the architect utilized this elevation difference to create a profound scenery, composed of stacked roofs and ancient trees in the old town of Beijing, and the shiny high-rises in the distant new city of Beijing. The visitors are invited to live, observe, and contemplate.

Micro-Hutong is a building experiment by Zhang Ke’s standardarchitecture team located on the Yangmeizhu street of the Dashilar area in Beijing. This project proposes to investigate the possibilities of creating ultra-small scale social housing within the constraints of super-tight traditional Hutong spaces in Beijing.

The architect reveals that the most problematic part of Hutong spaces is the lack of essential facilities and the absence of quality communal space. In fact, this might have caused many old occupants to sell their Hutongs and move to larger apartments outside of the city center.

Therefore, the design team hopes to use the courtyard as a generator of a program, believing that a functional space will activate the building by generating a direct relationship with its surrounding urban context, bringing more social activities to the interior area.

The flow of air and light introduced by the courtyard along with the urban vestibule in front of the building also creates a direct relationship between the living spaces in the dynamic volumes. This flexible urban living room serves as a transition zone from private rooms to public streets. Moreover, it plays the role of a semi-public space for both the inhabitants of the Micro-Hutong and the neighbors of the community.

The Micro-Hutong inherits the intimate scale of the traditional Hutong, revitalizing its social condensing capabilities while adding spatial improvements. The light-steel structure and plywood panel cladding allow for low-cost construction while creating new possible reconfigurations for the future of the Hutong in Beijing.

Hutongs represent local culture, in direct contact with the course of history. The need for urban renewal has been a long-term struggle but the question that remains unanswered is why are Hutongs underestimated when planners are dealing with urbanization?

Zhang Ke, the architect from standardarchitecture, has argued:

To explore co-living possibilities between public and private in the traditional courtyard structure, we should challenge ways of infrastructure integration in limited space to create decent new hutong life. 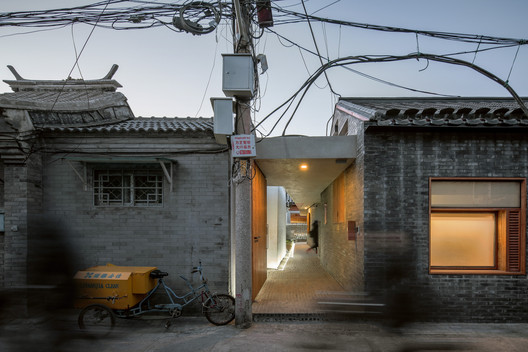