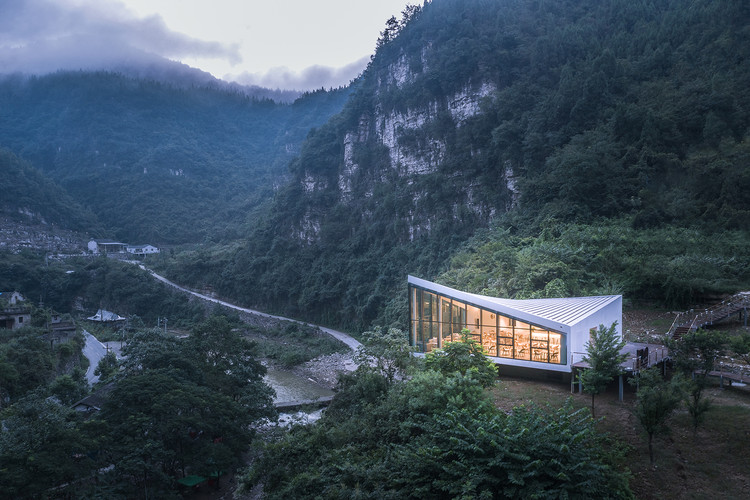 Background and site: a magnificently beautiful place in the abandoned arsenal
The 809 factory is located in Xialao Creek, the suburb of Yichang City, Hubei Province, China, which is about 30 minutes’ drive from downtown. Once a military factory, it was gradually shut down and abandoned in the 1990s. The project covers an area of about 3 hectares and a construction area of about 13000 square meters. The purpose of the project is to protect and show the original appearance of the buildings and form a new use function through the transformation and reuse of the abandoned factory, so as to revive the abandoned industrial facilities and help those enter the contemporary life. The buildings in the plant area are divided into hotel part and supporting entertainment part. The hotel part consists of lobby, art exhibition hall, four guest rooms and western restaurant. The supporting entertainment part consists of reception center, Chinese restaurant, book bar, Time Hall, parent-child activity center and Rimrock Tea Bar. Among them, the newly-built Rimrock Tea Bar has become a more attractive building in the factory area due to its special location and light temperament.

The Rimrock Tea Baris located on the hillside in the southwest of the 809 factory. On one side is a gentle slope connecting the hotel buildings in the plant area. On the other side, due to the erosion of the mountain by the river, a unique steep cliff with karst landform is formed. The natural environment here is beautiful. Standing at the mouth of the cliff and looking westward at the upper reaches of the Xialao Creek, it has excellent scenery and is a rare "magnificently beautiful place" with natural scenery in the factory. What impresses the design team deeply is that standing at the side of the stream under the cliff, the stream water, the stone cliff and the vegetation on the top of the mountain form a very beautiful picture.

The site is located on the hillside, which belongs to the end of the flow line in the plant area, with strong privacy. Coming to the site from the guest rooms’ direction, you need to climb a mountain road. This upward walking road strengthens the mystery of the site. The specific site selection of the building should not only be close to the cliff edge as far as possible to achieve a better vision, but also ensure safety, which brings great difficulties to the design team and construction team. After strict disaster investigation and geological survey, the building is located at the edge of the cliff rock, retreating 3 meters from the edge. Under the surface soil layer, the foundation is hard limestone layer, which has good bearing capacity and provides a good architectural view to the maximum extent under the premise of ensuring the safety of the building.

The architectural design: light and ethereal
In 2016, the owner proposed the idea of creating 50 "eye-catching photo spots" in the plant area during the project planning, among which the Rimrock Tea Bar was regarded as the top priority. The design team hopes to change the dull atmosphere of the old factory through the design of a building atop the cliff, so as to stimulate the vitality of the old factory. The function of the building is defined as a leisure tea bar, which is used for the guests’ and tourists’ leisure, tea drinking and sightseeing. After completion, it will become a relatively private and quiet leisure space in the plant area, and at the same time, it will have the best natural environment resources and landscape view in the whole plant area, providing a delicate living place with taste and tonality.

The starting point of the design is to think about two pairs of variables: "complexity and simplicity" and "lightness and heaviness". The volume design of the building starts from the simplest cuboid, of which the long side is perpendicular to the edge of the cliff, and it is about 3 meters overhanging out of the cliff as a whole. The bottom of the cube is supported by steel columns, forming a visual effect suspended on the cliff. According to the landscape effect of the four viewing surfaces of the building, the design team improves the vertex height of the southwest corner and northeast corner of the square top surface, and reduced the vertex height of the northwest and southeast corner. This changed the original four rectangular facades of the building block into four different trapezoidal facades, with the west and south sides larger and the east and north sides smaller. A torsion surface is formed by setting out the four sides with different slopes on the top surface, which also makes the original simple building block more dynamic and flexible. The design of building blocks starts from "simplicity", and produces "complex and vivid" visual effects with "simple" design methods, which makes the building and surrounding environment achieve both overall and vivid dynamic balance.

In order to express the "light" state of the building in the environment, the design team selectes glass and white aluminum plate as building appearance materials. White aluminum panels are used in the east and north facades and roofs to visually wrap the building blocks. Large area glass curtain walls are selected for the west and south facades, providing a continuous viewing surface for the interior space. The whole building is supported by 8 steel columns. There are huge overhanging on the west and south sides, and covered by shrubs at the bottom of the building, the building achieves the effect of being suspended in the air. The light source is only set behind the perforated part of the aluminum plate, which forms unique patterns at night.

Interior space: refreshing simplicity and distinctive prosaicness
The design team believes that in such a natural environment, the interior space of the building should be calm and simple, instead of being too complicated to affect people's view of the natural beauty outside the windows. The interior of the Rimrock Tea Bar adopts white and wood color as the main tone. The wall and top surface are simple white, and the ground surface adopts light wood color floor, which is comfortable and warm. The sunlight spreads through the huge glass curtain wall, bringing the beautiful scenery into the indoor space.

The indoor functions of the building are teahouse, bar area, toilet and utility room. The height difference is set near the west side of the teahouse, which forms a ladder for viewing to the west, and is also divided into relatively independent areas, bringing changes to the space. For the furniture in the space, the design team also chooses relatively comfortable cloth sofa and single chair, supplemented by a small amount of key lighting, which sets off the fresh and quiet leisure atmosphere of the space.

The exposed structure of the interior roof fully demonstrates the charm of the integrated design of space and structure. The Z-shaped steel plate beam changes with the torsion of the roof, forming the effect of three-dimensional curved surface and becoming the only protagonist of the space. In the process of roof designing, the design team adopted a clever conception method: Although the final effect of the top surface is twisted curved surface, it is formed by straight-line rotation lofting. According to this logic, the structure design is carried out, and it is concluded that each beam is a straight line, while the curved surface effect is only produced by adjusting the change of horizontal angle. This design logic is not only direct and effective, but also highly operable and intensive in the construction process. In the interior space, the steel beams are arranged according to a certain distance to form a sense of rhythm with order and decoration at the same time. It was this structural and constructive aesthetics that led the design team to decide to completely expose the structure of the roof.

Construction process: aggregative design with multi professional cooperation
As a steel structure building, the Rimrock Tea Bar’s complex geological environment, large span overhanging of the floor, conversion of beams and columns, and twisted special-shaped roof have become the difficulties in structural design. Among them, the design and implementation of twisted roof is not only the difficulty and highlight in the project, but also the result of the deep cooperation between architecture and structure. Under the condition of considering the sense of order of construction space and feasibility, the design team divides the building roof into two opposite triangles according to the diagonal line according to the 1.5m modulus. Through the accurate customized processing of the triangular surface, the special-shaped torsional surface is formed. The traditional I-beam or box beam structure is not used for the support of the indoor roof, but the customized special-shaped steel plate beam is used as the support mode. The 40 cm high steel plate beam is set on the roof axis and diagonal line, which not only ensures the welding attachment point of the triangular steel plate, but also presents the unique rhythm and rhythm of the steel plate beam changing with the roof torsion. The external material of the roof also adopts the straight aluminum veneer profile roof for decoration, which further indicates and reflects the construction idea of the roof.

As the indoor space needs to be exposed, the lighting pipeline on the top of the plate needs to be positioned and arranged in advance before the roof top pouring, which also tests the tacit understanding degree of design and construction among multi disciplines.

Conclusion: Architecture and nature, history and contemporary
The Rimrock Tea Bar is the second cliff related project of 3andwich Design practice, which also continues the design team's thinking on the relationship between architecture and natural environment for a long time: the design should start from the geographical, natural conditions and location of the building location, pay attention to the dialogue between artifacts and nature, respecting nature and appropriately expressing the existence of architecture at the same time. Architecture should be symbiotic with its surroundings. The surrounding natural environment provides background, conditions and base for the buildings, while the appearance of buildings adds human factors to the environment and becomes the connection point between environment and people.

On the other hand, the Rimrock Tea Bar is located in the historic 809 factory area, so the contemporary design language makes it particularly prominent in the whole project. This contrast also represents the consistent thinking of the design team to deal with similar problems: the profound culture and history need to be protected, but more appropriate innovation and activation are needed, as well. Designers should find a balance between the confrontation and conflict, so that the old would be older while the new newer. 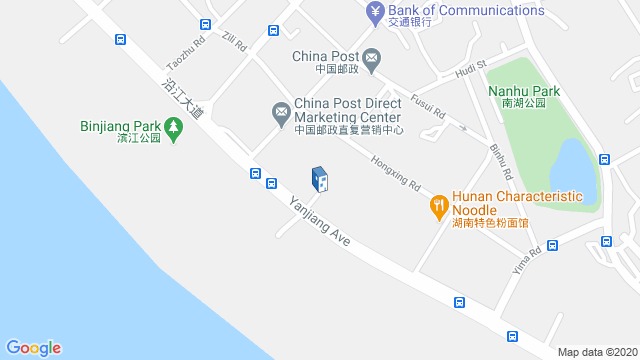 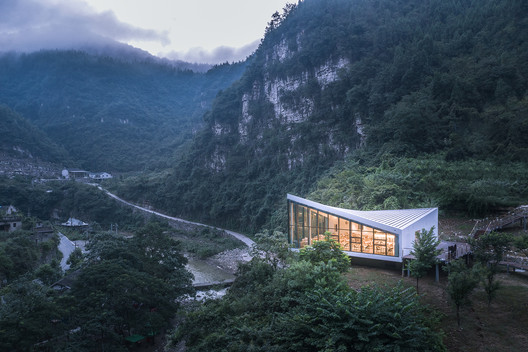