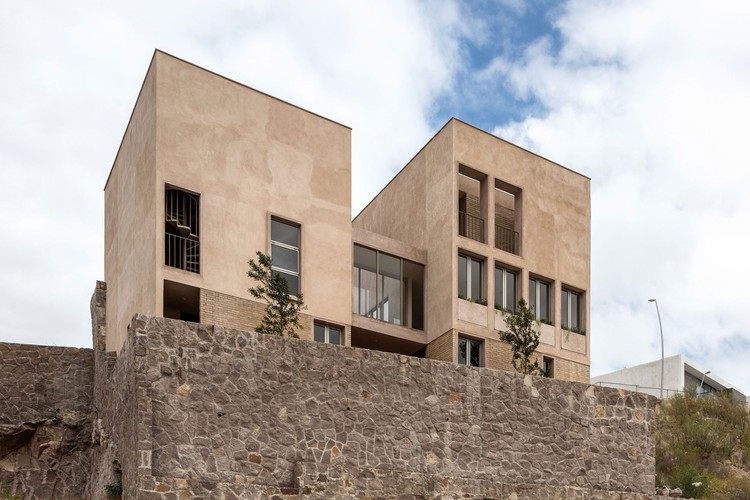 Text description provided by the architects. On a 230 m2 lot, with a panoramic view to the east of the city of San Luis Potosí, the CP House emerges, a single-family housing project, whose main objective is to live the house inwards. Open courtyards function as a vestibular area and create space between the different areas of the house, which allows absolute privacy from the street side, a blind facade, which not only respects the privacy of the user but also responds to the orientation of the west. The distribution scheme of the house was generated by two volumes on the sides of the lot, achieving a large central open space, which serves to contain a tree. Due to the topography of the lot and the conditions of easements of the subdivision, it was decided to generate three levels. At street level on the middle floor are the social areas, the main access, access to the garage, living room, dining room and kitchen. These spaces are linked by a central bridge, which connects both volumes.

In the north volume on the upper floor is the main area, which was tucked into a double facade, in order to take into account the sun from the east and the strong winds in the area. Without forgetting the general scheme of the house, the spaces of the main area are lived in the same way inwards, around an open courtyard. In the bathroom area, the user experience is not limited to a conventional space but is rather extended and used as a contemplation area.

In the south volume of the lot, a spiral staircase links the kitchen area on the middle floor with the laundry area and utility room on the upper floor.

There are two secondary bedrooms on the ground floor supporting both volumes, articulated by a television room and study area. These same spaces share a large terrace space. It is here where the purpose of the project is understood, the connection and continuous transition of the spaces between the exterior and the interior.

The materiality of the house was influenced by the arid landscape of the area, as well as the architecture of different towns near the capital. The use of local stone, a bare sand-coloured partition and carefully pigmented stucco resulted in a balanced integration into the landscape and terrain of the area. 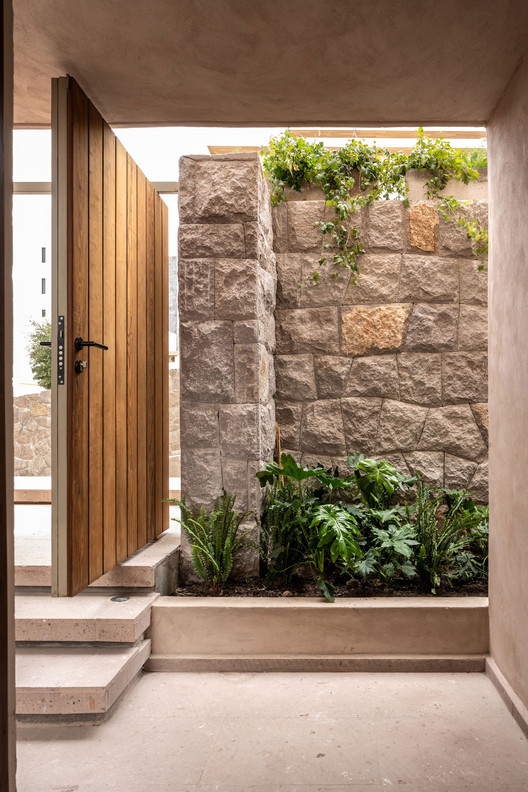