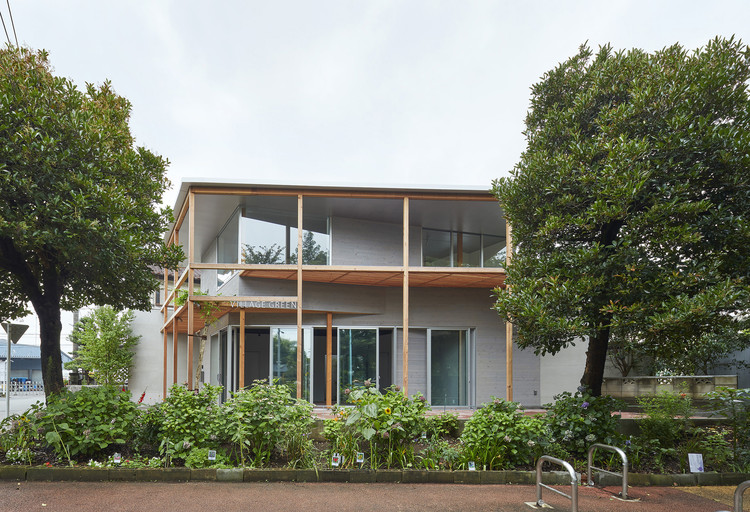 Text description provided by the architects. This is a small wooden building complex consisting of a stage for the expression of people with intellectual disabilities on the first floor and a rental house on the second floor. The site is located on a corner lot, facing a pedestrian-only greenway to the north and a quiet street to the east. The south and west sides of the site are in a“quiet low-rise residential area”.

The first floor is a stage for people with intellectual disabilities to perform music and puppet shows, as well as a cafe and rental space staffed by the disabled themselves. It is wide open to the daily lives of people passing by on the greenway. (At the same time, sufficient sound insulation is ensured through the use of double sashes, for example, when necessary.) The second floor is a rental house, also open to the greenway and can be used as an office by opening up the fittings between the rooms.

We thought about how the activities of people with intellectual disabilities, the audience, the people who come and go, the residents, the changing of the seasons, and so on, relate best to each other. In accordance with local legal regulations, we created a setback distance of 1.5m on all four sides, and a setback space of 1.8m more under the roof on the greenway and street side. The area created by the setback became a device to face and connect with the greenway and the road. It is a place where the space is unwound, swinging between inside and outside, becoming a pier for the overflowing audience, a café terrace, and part of the greenway.

In the middle of the first floor, a louver (partly a wisteria trellis) has been added to provide a calm place to stay underneath. The louvers also protect the residents from eyes on the passerby through the large windows on the second floor, which are open to the greenery, and gently connect the residents' eyes to the activities of people with intellectual disabilities under the louvers. The eaves of the building are painted silver to bring the reflected greenery inside. In other words, the interior space is always in a relationship with the "other side", like "stage", and does not complete in isolation.

Looking at the greenway from the inside on the first floor, vertical elements such as columns, fittings frames, utility poles, trees, and signs, and horizontal elements such as hanging walls, floor paving, railings, retaining walls, and the greenway, are intermingled with each other, blurring the boundaries between internal and external, giving us a sense of place, but leading to a greenway.

The exterior wall of the first floor is parallel to the greenway, while the exterior wall of the second floor is directly opposite to a large tree, creating a gap between the upper and lower walls. By doing so, we hoped that this architecture would appear neither as a residence nor a welfare facility in the daily lives of people and people with intellectual disabilities, and that it would become a special place while blending in. 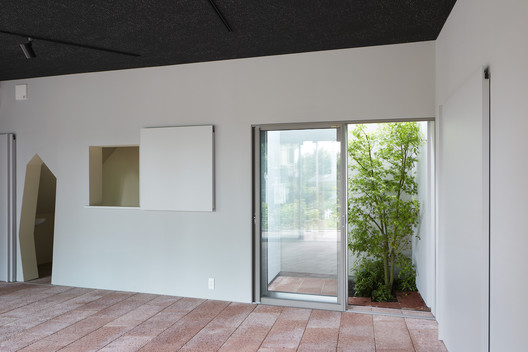 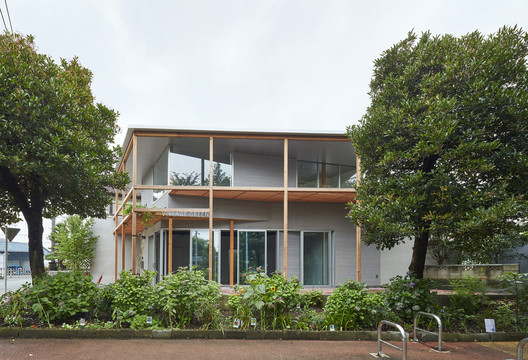