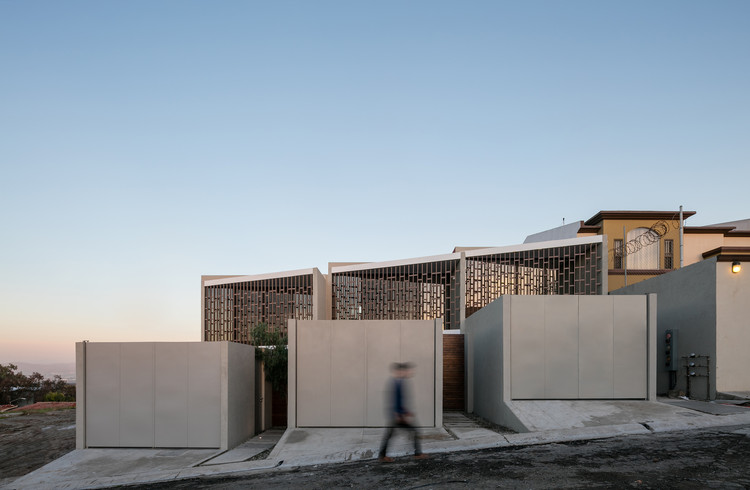 Text description provided by the architects. In a property located in one of the many hills of the city of Tijuana, originally planned for single-family housing, a three-unit horizontal condominium complex was proposed with the intention of increasing the density of the area and giving young people the possibility of acquiring a home in this central neighbourhood. After clarifying the feasibility of re-densifying the lot, and maintaining a low sale cost, the biggest challenge was to achieve natural lighting and cross ventilation in each apartment, since each of them would be only 5 meters wide, but 18 meters deep. To achieve this, the project was resolved mainly in section, playing with changes in heights, which allow openings at different levels, which ventilate and illuminate the houses on an East-West axis.

The perimeter walls function as structural axes loading lightened slabs that do not depend on additional structural elements. This allowed a free floor plan in the social area of the first floor, which opens towards a double-height space, which frames the panoramic view resulting from the location of the property. This space is integrated into a terrace that allows you to inhabit the social area indoors and outdoors and take advantage of the pleasant climate of Baja California. While on the upper floor, which is divided into two by the vertical circulation, light partitions were used to obtain that flexibility that allows adapting the use of the space to the needs of each family.

On the outside, there is a solidness in the basement and a lightness on the upper level with a metal lattice, which works both as a contrast between the opening of the house to the outside and the entrance of light, as well as a security element for the protection of the building, required by the level of insecurity recently experienced in this border city.