Save
Concrete Slabs with Bubbles? How Biaxial Voided Slabs Work
Share
Or
Copy

In the dome of the Pantheon in Rome, several construction techniques were used to allow such a bold construction to stand. One concerns the composition of the concrete (in this case, non-reinforced concrete) with different densities throughout the structure. Closer to the top, lighter stones were used in the mixture, reducing the dome's weight retaining the solidity of the base. Another technique was the inclusion of “coffers”, which are nothing more than subtractions in the concrete, reducing the weight of the dome while maintaining a cross section sufficiently robust to support its own weight. Built almost 1,900 years ago, this building still surprises us with the genius of the solutions. Using a quantity of materials just high enough to fulfill its primary function, and creating intelligent structures as a result, is just one of the lessons that this building provides.

Concrete is one of the most commonly used materials in the construction industry. However, the production process of concrete consumes large amounts of energy and non-renewable natural resources, while simultaneously emitting considerable amounts of gas that only contribute to the worsening of the planet's greenhouse effect. Looking for ways to make its use in buildings more eco-conscious, while still taking advantage of its structural characteristics, is a first step towards the more sustainable future of civil construction. For this reason, it is important to understand both the potential of concrete and its weaknesses. In the case of concrete slabs, a major disadvantage of the material is its considerable weight, which limits larger spans of concrete at the risk of the structure collapsing. Concrete has good resistance to compression, but very little resistance to tension. Thus, reinforced concrete uses steel to support the slab from against acting tensile forces.

In precast, hollow, or ribbed slabs, part of the space that would otherwise be occupied by the concrete is left empty or filled with a material of less weight, such as ceramic bricks or expanded polystyrene. A similar approach was developed in the 1990s by Jorgen Bruenig, who developed in Denmark a type of biaxial hollow slab (today better known by the BubbleDeck trade name). It is a system composed of hollow spheres made of plastic, which occupy places where the concrete has a less important structural function, such as in between columns. The spheres, inserted uniformly between upper and lower steel reinforcements, fill with air the space that would otherwise be occupied by concrete serving little structural function and adding significant weight. With this system, it is possible to reduce between 25% and 35% of the slab's own weight (compared to a solid slab of the same thickness), allowing for larger spans, reducing the section of the columns, and decreasing overload on the building's foundations. It is estimated that the use of 1 kg of plastic for the spheres saves about 100 kg of concrete.

Also called biaxial hollow core slabs, the properties and behavior of this material are similar to that of massive concrete slabs, since the forces are transferred in both horizontal directions to the pillars and foundations. They can be built using modules, pre-slabs, or finished panels. They require less shoring than solid or even ribbed slabs, allowing the construction to move faster. Using prefabricated components can also significantly reduce the need for labor, resulting in even faster and cheaper construction.

The spheres can be composed of recycled polypropylene material or polystyrene, with low specific weight and good resistance. After the concrete is poured, the piece appears to be a traditional solid concrete slab and the spheres remain in the structure. Research and tests have demonstrated this technique's strong acoustic quality and fire resistance as well. Evidently, however, it is a system that requires more attention to detail, particularly when designers have to adapt the existing dimensions to new design demands. Another limiting issue is that in some countries, there are still no regulations specific to this system, or enough labor with adequate experience in this method.

In recent years, this technique has been widely applied to large-scale projects, such as educational buildings and even airports, where deadlines are tight and budgets permit investing in new methods. Searching for sustainable solutions may mean creating new materials and new technologies, but it can also be as simple as using the same material in more intelligent, conscious, and efficient ways.

For more technical information about the system, access this link. 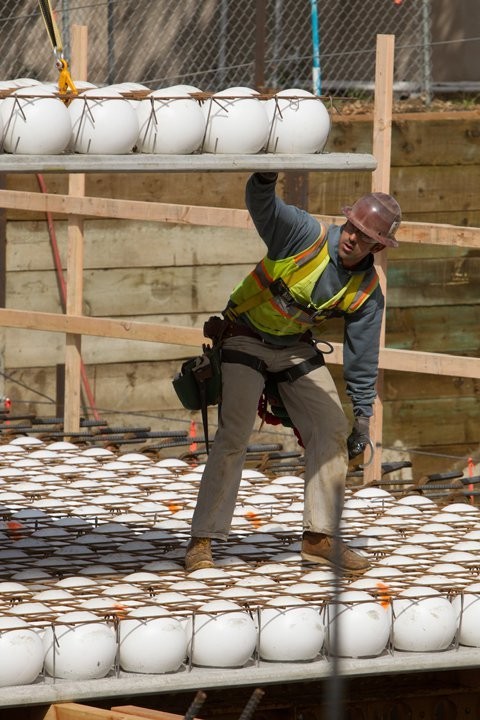