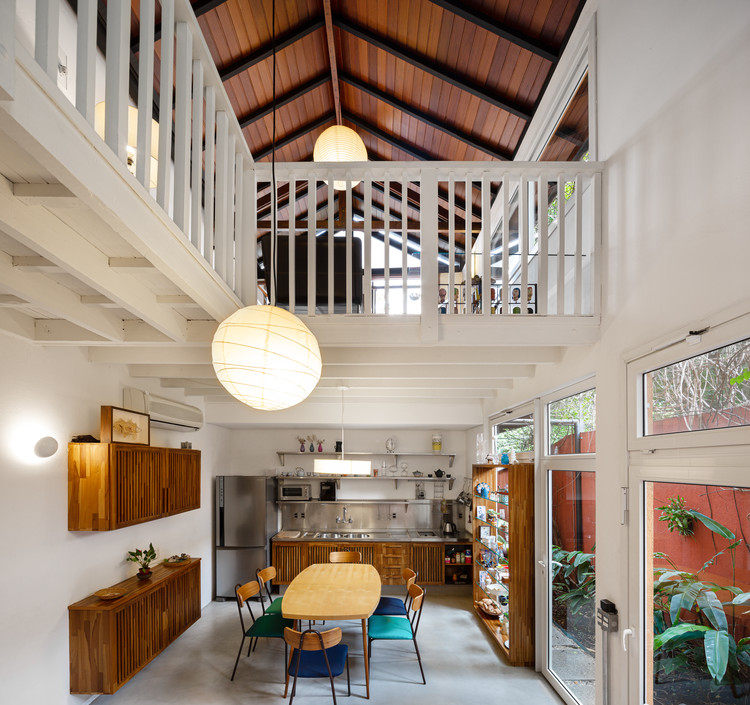 Text description provided by the architects. This project is a renovation of a small residence in Vila Madalena, São Paulo. The demand was to create a studio/rehearsal space and sporadic housing for a couple that work in São Paulo but live outside the city. The typical two-storey house at a narrow lot was a slim building attached to one of the boundary walls and 1,5 meters away of the other. The renovation proposed punctual changes that would respect the structural system of the house and highlight some of its original elements; trying to create few wide, fluid and integrated rooms.

The main volume of the house, the gable roof and the old wooden stairs were maintained and recovered. The stairs received a new wooden surface to cover the void underneath and was painted in white. This element, due to its central position in the house, split the space of both storeys in two: front and back. The walls of the ground floor were demolished forming unified spaces; and large glass doors created visual connections between the interior and the garden at the side corridor, bringing more illumination and ventilation to the house. At the front part of the ground floor, the integrated space of the kitchen, dining and living rooms became the main entrance.

The kitchen, previous located on the upper floor, was turned into a fresh space, formed by stainless steel countertop and shelves, and wooden low cabinets. The back half of the level floor, previous a sequence of small spaces, was turned into a generous rehearsal room connected to the living/dining area through a sliding door. A new small vertical volume was built at the end of the side corridor to hold the hydraulic rooms, such as, bathrooms on both storeys and a washing tank on the ground level.

On the upper floor, the roof trusses and ceiling lining were recovered and kept exposed. At the back part of this level, upon the studio/rehearsal room, there is an antechamber/changing room followed by a bedroom. At the front part, the mezzanine, a small working room, received new openings towards the façade of the house: wooden doors that recycled and reallocated, connecting the interior with the new decking/solarium, over the parking space alongside the street. Both, the solarium and the entrance gate, were built by slats of a synthetic material, and create the front façade of the house. The small house has all the equipment for generating solar energy responsible for water heating and electricity. As well as a rainwater reuse system, in vertical tanks discreetly placed next to the walls. Therefore, the Vila Madalena house could be considered practically self-sufficient.