Dominique Perrault’s proposal has won “the transformation and revival of industrial heritages” or the Hangang district urban design international competition, in Handan, China. Six teams from world-renowned architectural firms, including Coop Himmelb(l)au and UNStudio Team, were invited to participate in the contest and envision the future of the city, through their creative designs. 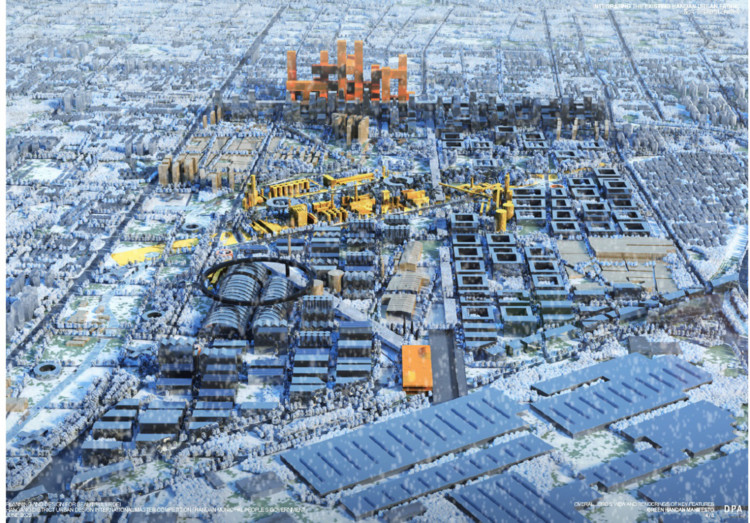 To create a future-oriented blueprint for the transformation and revival of Handan and inject new cultural aspects, the jury chairman, Song Chunhua, Former Vice Minister of the Ministry of Housing and Urban-Rural Development of the People’s Republic of China, stated that the evaluation will focus on four aspects: historical and industrial heritage, ecological reasons, vital public spaces, and a near-future plan. Choosing the strategy of smart renewal, the competition aims to develop master plans that “speed up the transformation progress and upgrade the entire steel industry, deal with the traffic problems, environmental pollution and settle other infrastructure issues”.

After several rounds of evaluation, the result was finalized and the “The City of Tomorrow” proposal by Dominique Perrault Architecture was selected as the winner. The winning project presented, according to the jury, new strategies, and solutions with a global vision and international standards. The second prize was shared by projects from Wang Jianguo and Zhuang Weimin. Read on to discover the list of proposals and their descriptions, including “Nature Heritage City” by Coop Himmelb(l)au, and “The Green Jade” by UNStudio.

“The City of Tomorrow”

Dominique Perrault Architect master team’s proposal is meant to build the Green Handan Manifesto, a city full of possibilities and adequate to live. There are Four Axis that are especially relevant for the Hangang District: WATER FEATURES, GREEN PRODUCTION, PRESERVING THE HERITAGE, HOTEL METROPOLE. The first three themes are directly related to the site and they are the direct consequences of the site analysis. It is the belief that those three elements are the core of the project. To work on those themes and articulate the together, it is necessary to add the fourth layer, a layer about usage and economic structure: The Hotel Metropole. Hotel Metropole is a concept, developed by Dominique Perrault to take into account the changes in the city life around the world and adjust accordingly. The four axes for Handan penetrate the design strategy at every level: they are thus drawn in every detail, every concept. In a way, they are as watercolors on wet paper: blending with each other, leaving a sense of repartition but present over the totality of the work.

A three-step design proposal "Transition · Memory · Renascence" proposed by WANG Jianguo Master Team shall make Hangang district a new model area of cities worldwide with the merits of upgrading its functions, productions and the environment as well as City-Industry Integrated planning and development in Handan. The six development strategies were set in accordance to the masterplan, “introduce emerging industries and incubate composite functions, revitalize industrial heritage and retain urban memories, rejuvenating Hansteel area, driving space catalyst, the integrated transportation network of fast and slow travel, creating a blue-green system to purify the ecological space, building a healthy community and create a vibrant place”. With revitalized industrial heritage and newly-built public buildings scattering around, the central park that extends from the ZhaoWang Heritage Site would be the new ecological backbone. The restored Qin River scenery connects the east-west ecological path, the Business & Commerce connects to the city transportation hub to the east, the Culture & Leisure Axis connects to the core area of Fuxing District to the north, 6 different urban clusters intermingle with the splendid rural landscape. We are looking forward to witnessing Hangang rising in this glorious steel city, acting as an example showing the revival of Chinese industrial heritage to the world, a pioneering demonstration area for industrial transformation and urban integration and a people-oriented livable urban quarter for a balanced life.

ZHUANG Weimin team visualizes to make Hangang as a future-oriented rural city of blue and green, a city of vitality that is suitable to live and visit. It will coordinate manufacturing, living, and ecological space and adopt a pattern of cluster development in combination with water and greening systems, building an organism with man and nature living in harmony. Handan is a city of humanity. The ruins of Zhao State Capital as well as the surrounding village and idyllic landscape are well reserved. Agricultural civilization, industrial civilization, and ecological civilization communicate in here. Guided by culture and technology, Handan will put emphasis on the development of cultural creativity, technology innovation, and producer service industries. This is a happy community, which is supported by industry and well-balanced work and life. As a new urban vitality center, east Handan will be the future city center with the interweaving of agriculture civilization, industrial civilization and ecological civilization, which will surely realize its leaping development of Hangang, enhancing the competitiveness of Handan city and set up a model of industrial heritage revival and glow in the new era!

The main idea for the transformation of the Hanging district from Coop Himmelb(l)au master team is to open the former urban void back to the city. Revitalization of nature, landscapes, and waterways will bring benefits to the wellbeing of the future inhabitants and the whole city. The main concept for the Energy Welcome Tower is to create an iconic, elegant and vibrant appearance through the unified shape of a cone and a spiral, generated out of climate, the economy of the structure as well as program and the correlation of orientation and surroundings. A new innovation and science city can become an attractor for companies to settle, a healthy and sustainable environment will be attractive for real estate developments. Entertainment and leisure parks will support urban life and create destinations for inhabitants of the district and tourists from all over China and the world. The core area will transform an industrial site in the city center into a Nature Heritage District with science and technology parks, vibrant residential neighborhoods along green corridors with cultural venues, open-air museums for the industrial heritage, and water networks.

Academician CHENG Taining Team’s approach is called “Time Compass, Revival Engine”. The plan forms a spatial structure of “one city, nine districts, two rivers and many veins”. The two water systems of Qinhe and Zhuhe, as well as a number of structural green veins, connect the nine major areas with the old railway station, subway station, Zhao State Capital, and other important facilities as a whole. Choosing the area with the highest historical, cultural, and technological value in Hangang District as the core leading area lay our various engine-driven projects and build a future-oriented central activity city. Following the important axis of the former blast furnace core process, shaping the spine of the core area, forming a fish-bone shaped spatial system, linking the city, life, industry, and the ruins of the city of Zhao State Capital. Creating a revival leading zone for the transformation of a butterfly.

UNStudio’s masterplan focuses on three key urban pillars - technology, history and health. For technology, they build a new campus for innovation that spreads over several neighborhoods and buildings. For history, they link physically and metaphorically to Handan’s culture and history by creating an urban jade – a unique area that offers beauty and prosperity. For health - they create a walkable, green and safe environment that is designed on a human scale and offers a sense of community. Tree major strategies were proposed to adapt to the rapid development of the world, they are Upgrade vs. Erasing, Empower vs. Forgetting and Enrich vs. Abandoning. The core integrated approach to sustainability is the Green Jade which host steel industry facilities and contaminated soil, the traditional Bell Towers is replaced with a future-oriented Eco Towers that retain water and provide energy on a local level. Handan City will start from the "Green Jade" and will be seamlessly connected to the existing multi-model transport network of Handan. Together, it will make Hangang district a symbol of a prosperous and healthy future. 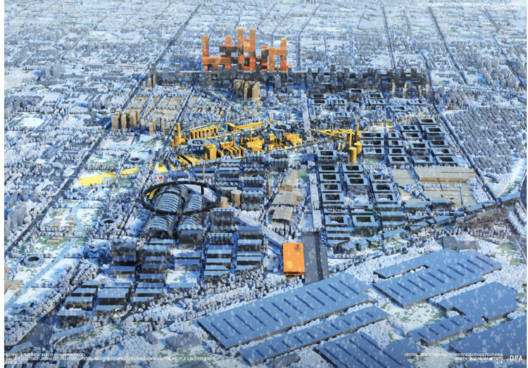