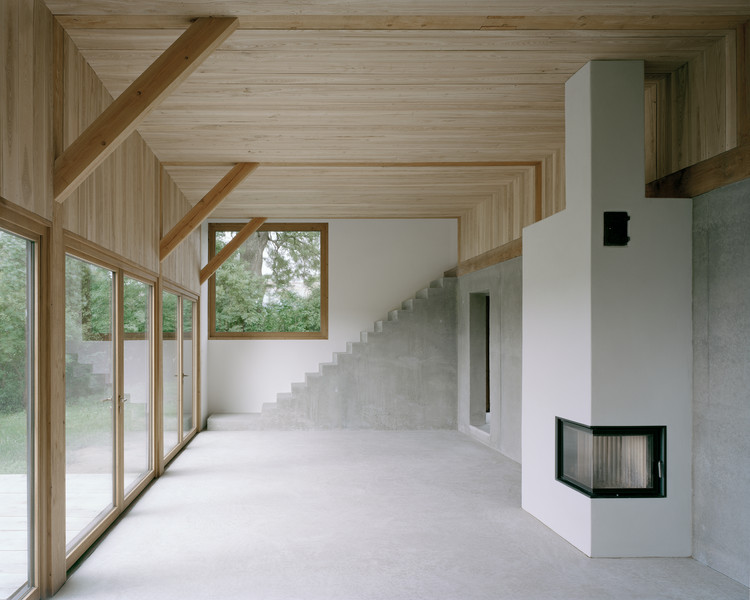 Text description provided by the architects. As a counter-model to living in the agglomeration of the city, Haus Lindetal reveals itself as a place of retreat in the manageable context of the rural settlement. Not responding to the wish of many builders for homely comfort and the gardener's urge to be active with the response of apartment buildings and allotments is not a new phenomenon; After all, the flight to the country has brought about many facets of residential structures in the last 60 years, from models of urban sprawl to attempts to convert rural properties.

Today's image of the rural landscape of house forms is characterized by traditional farms, simple and economical homesteads from the new farmers' era, as well as modern single-family houses with their individualized variants of industrial house production. Surrounded by this mélange, Haus Lindetal positions itself with a traditional bridge. The project develops its identity from the building typology of the low German hall house, which has shaped rural northern Germany since the 17th century. Fitted into the old trees of the former village inn, the design is an appeal to restraint, precision, elegance, and rusticity. The central and largest room is the two-story living hall. Its almost sacred atmosphere results from the interplay of light, surprising spatial arrangements, and the grace of a central fireplace.

The building is formed from a concrete base, which goes up from the floor slab into wall and stair elements and naturally divides the whole thing into two different connected areas. The supporting structure is designed as a wooden framework made of pine with a ring of thresholds made of oak according to strict craftsmanship rules and joined in careful carpentry-like joinery with iron-free wood connections. These spatially demanding and precisely fitting connection nodes represent the heart of the construction and, thanks to their material-appropriate power connection, become a structural ornament. The criticism of the project does not lie in its obvious return to traditional craftsmanship and the consequent rejection of machine production of building materials and elements. His special focus on the manual manufacturing process positions itself by questioning the complex material logistics of today's construction.

As a counter-thesis, the project aims at the logistics of the skills and preferably brings the know-how to the construction site. With this in mind, a temporary construction hut was built for the duration of the construction process, which served as both home and workplace. A joinery area and wood storage on the property completed the ensemble of the temporary production facility. The obsessive designing and building with wood as a locally available building material in times of discussion about the resources of architecture nevertheless enables high-quality construction. As a radical consequence of the abandonment of panel materials from the woodworking industry, Haus Lindetal is formed from local building materials from the surrounding sawmills.

Regardless of the zeitgeist of construction with industrially manufactured structures, the basic idea of the project lies in the appreciation and honest attitude of the construction as an expression and pride of the wandering carpentry trade. From the outside, Haus Lindetal appears more like a barn than a residential house and, in its homogeneity, looks like monochrome graphite. From the interplay of architecture and handicraft, the project has created a homage to the skill of the carpenter, which takes a clear position in the discourse on the evaluation of sustainability and knowledge transfer. House Lindetal thus develops powerfully from what already exists and fits naturally into the former gap in the center of the village.

Frame house. The supporting structure is designed as a wooden frame made of Douglas fir with a wreath of thresholds made of oak in carpenter-like joinery with iron-free wood connections. The choice of wood means that no chemical wood protection is required. All timber for the entire house construction (construction timber, formwork, and boarding timber) was obtained from two local sawmills and tied / further processed on-site. A total of 55 m3 of wood from Douglas fir, oak, larch, pine, and ash felled in winter were used for this project. Board materials from the woodworking industry were not used. Wall, ceiling, and sub-formwork was shot from trimmed pine boards with a nail gun. The outer shell of the wooden frame is insulated with flexible wood fiber insulation. The outer casing and the bitumen roof are rear-ventilated. All wood in the outdoor area, such as the larch faceplate untrimmed on one side, the oak windows and oak reveals and the gate, are protected with graphite linseed oil paint.

Building Process. By emphasizing the manual execution of the project, the building process, with the sequence of its trades, is of increased importance. The one-year house construction begins in spring 2015 with the shuttering and pouring of the exposed concrete inner wall with stair blocks on the reinforced concrete floor slab, virtually from the inside. After six weeks of joining, the wooden frame construction is straightened around the concrete core in one week without a crane. After completion of the outer shell with insulation, larch outer cladding, roof covering, and the windows in summer, the interior works will follow in autumn.

In addition to the visible ash shuttering of accentuated areas of the interior, the wall and ceiling surfaces are plastered with three-layer lime plaster on wooden sub-shuttering. The floors on the ground floor are designed as an exposed screed. The drying periods associated with plastering and screeding postponed the final work on the interior work until the following spring. With the construction of the terrace and the installation of the gate, the temporary building shed on-site was dismantled and preparations for the client's summer move-in began. 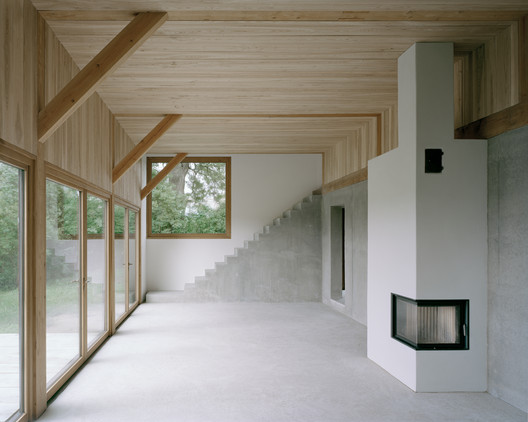