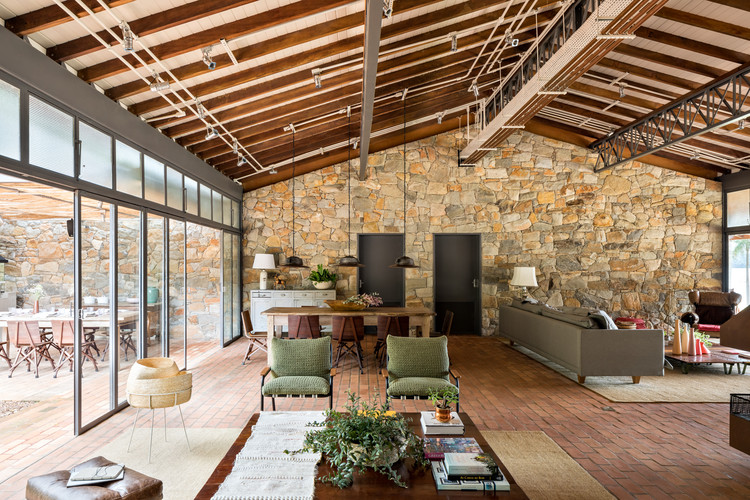 Text description provided by the architects. The Ibiuna country house, located 100km from the city of Sao Paulo, sits on a 17.000 m2 plot facing a large reservoir. The interiors had incredibly low ceilings due to the use of linings and the old structure was generally fragmented with little connection to the outdoors. Our design broadened the space and our main guideline was to take down the barriers between the inside and the outside. The choice of materials was significant for the desired concept. Because it is a country house, we opted for natural and rustic materials, such as stone, brick, and wood. We wanted a house that would connect to nature in a light and spontaneous fashion, without competing with the grand view to the reservoir and its green surroundings. The social area was expanded by relocating the kitchen and service areas, which allowed for a connection between an inside patio – which used to be isolated – and a veranda to the reservoir. The brick floor unites the inside and the outside, which are then limited by large sliding metal window frames from floor to ceiling. Everything designed to deconstruct the limits between interior and exterior and give the feeling of being one with the reservoir.

The roof structure was exposed, which made room for the highest possible ceiling, but it required structural reinforcement, provided by metal trusses which cross the entire living area, allowing for it to be opened. The space accommodates four smaller environments: living room, dining room, games area and intimate lounge, all connected by a fireplace. The stone wall, which begins in this room and goes through all the patio in the posterior façade, meets the pergola, made of metal and vines, together creating a large veranda and gourmet kitchen. The highlight is the copper finished pizza oven, imported by the client, who owns an Italian restaurant. All the existing pillars in the veranda overlooking the dam were restored, except for one facing the living room, removed to make room for the view. All remaining were reinstalled with an inlay of iron, for they were too deteriorated by moisture. The veranda faces the infinity pool, which, on its turn, blends in with the reservoir.

Therefore, we chose red sandstone for the surrounding – dirt color – and green slate for the pool – to resemble a natural pond. In the kitchen we looked for farm themed references to keep up with the spirit of a country house, so besides cooking, there had to be room for a large table to facilitate spontaneous meetings. The stainless-steel counters are practical and bring on some urban modernity, while the floor is made of red crafted hydraulic tiles and the cabinets of cumaru solid wood, whereas vintage lamps and furniture complete the mood.

The linings were taken down in the bedrooms, considerably expanding the space. The large windows once had shutters that would open partially, so they were transformed into large sliding doors that run all the way on the exterior façade, making possible to open and light the entirety of the bedrooms. All the window frames and rainwater pipes were painted the color of wine, bringing some color to the project, while keeping with the natural palette. The living, which is also the viewpoint, divides the private bedroom area into two – three suites on one side and two on the other, the family ones at both ends.

On the corner bathrooms, part of the main suites, a small ventilation patio was connected to the shower, its wall being replaced by window frames and the ceiling becoming a glass pergola. This allowed for great luminosity, a view of the sky and complete integration to the green outdoors. All bathrooms’ walls and floors were lined with Ivory colored Atacama cement boards, the same material used on the box like sinks that pop from the wall. The exposed installations are part of the design – line sculptures that run through the entire house. A project that breaks boundaries. An invitation to being part of an abundant nature. An invitation to curious eyes that search for beauty on the horizon, without loosing sight of the details that define the project. 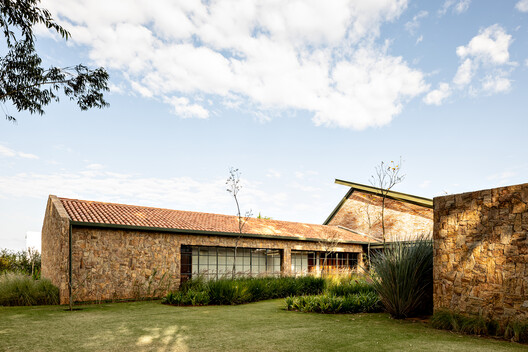