Save
Foster + Partners Unveils its Latest Project, a Mixed-Use Over Station Development in Central Sydney, Australia
Share
Or
Copy

Foster + Partners has revealed visuals for its Pitt Street OSD and metro station design in Sydney, Australia. Stretching out underground across an entire city block, the over station development in the center of the city puts in place a 39-story office building and “creates a vibrant mixed-use hub offering flexible space with an elevated lobby and retail plaza in the heart of Sydney’s retail, dining, and entertainment precinct”.

Following up their work on five of the new stations on Sydney Metro City & Southwest, the latest Foster + Partners’ intervention is strategically located on the corner of Park and Pitt, above the northern entrance to Pitt Street Station, a crucial hub for the new Sydney Metro. Responding to the surrounding context in a contemporary form, according to Senior Partner Ross Palmer, the building takes on a sandstone and bronze color palette. Reflecting Sydney’s global city status, the project “will reinforce and frame one of the key gateways to the city with a design that celebrates the rich architectural heritage of the precinct and heralds the future of Sydney’s next-generation midtown”. Part of Australia’s biggest public transport project the Sydney Metro, the Foster + Partners’ development is carried out in collaboration with Cox Architecture and Bates Smart.

The Pitt Street north design is inspired by its unique park-side CBD context, bringing together office, transport, retail, and public places in a coherent form. The podium draws upon the scale and materiality of its neighbors, with entrances emphasized through incisions that extend vertically and articulate the building as a cluster of three forms. Each of these forms responds to views over the Harbor, Hyde Park and Town Hall. -- Ross Palmer, Senior Partner at Foster + Partners

A glass veil allows daylight to flood the station plaza concourse throughout the day. The ground floor is topped by three vertical blocks with curved corner glazing, an urban mass that generates a connection between station and building. In fact, “a vertical recess in the facade continues seamlessly through the full height of the building and is centered directly on the station entrance veil”. Moreover, the project features “a podium level whose datum follows the building heights of the two listed buildings adjacent to the site”.

Facing south, the primary elevation has very little solar exposure and minimal vertical sunshades, while on the east and west elevations, the glazed area is substantially reduced to reduce heat gain with an array of solid and transparent horizontal ribbons that help manage the high sun. 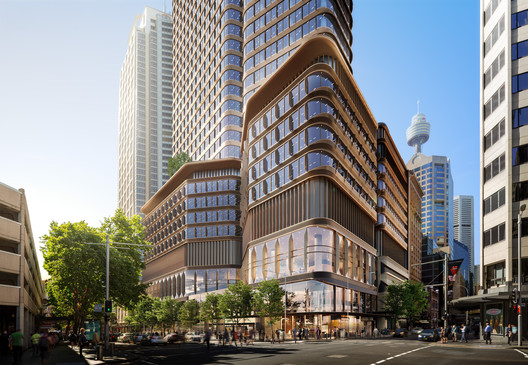