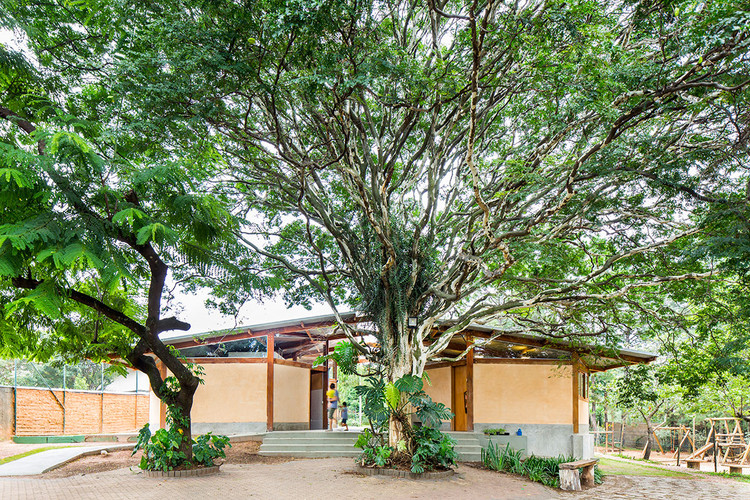 Text description provided by the architects. The project was born from the need to expand the school, and from the community's desire to remain at its current address. Thus, the classrooms are no longer adapted environments in the former residence and have gained appropriate facilities: hexagonal rooms, following the aspiration of the pedagogical body for an anthroposophical architecture.

According to Rudolf Steiner's thinking, one should avoid adopting right angles, but rather work environments with more organic forms - which would be more welcoming to students. Hence the option for classrooms in hexagon shapes and sloping roofs. Another important aspect of the project is its modularity and expansion in subsequent phases, in order to accompany the growth of the school (which in February 2019 reached the 3rd year of Brazilian elementary school).

With the important premise of a dismountable construction, we opted for a construction system which structure is light and quick to install, in pieces of hardwood. As the school is settled in a leased land, the investment in new rooms would have to be dismountable for eventual relocation to another property. Thus, columns, beams, and roof structure are relocatable. Tiles, doors and windows too. The only items that are not possible to reuse are foundation (for obvious reasons) and walls. For the walls, a special character was reserved.

As it is an associative school, in which parents participate actively, it was intended to create a construction activity that would give a sense of belonging to the group. The walls are built using the traditional hand mud technique. Between the main wooden structure, wooden slats were arranged. The mesh supports the “hand wipe”, clay compacted manually by parents and children in a playful and very symbolic activity.

Specialists in rammed earth (Architects André Heise and Márcio Hoffmann - Taipal Construções em Terra) gave a practical training course to the community of Ecoara, and also to the construction workers. The idea is to spread the use of the technique, forgotten in its traditional version and still little used in its modern version, now with the proper technological controls of the mixture.

It is intended a wall with good thermal comfort, and that “breathes”. Possibly, the most interesting feature of the technique is the “returnability” of the material to the natural environment - the earth becomes earth again. For this, there is no addition of chemistry in this project (cement or water repellents). The roofing is in metal sandwich panel. The bottom face of the set is with perforated metal sheet, in order to allow sound absorption suitable for classrooms. The expectation of the project is that the school, both because of its hexagonal layout of rooms willing to create a central courtyard, and because of the type of construction can nurture the community beyond the classrooms. 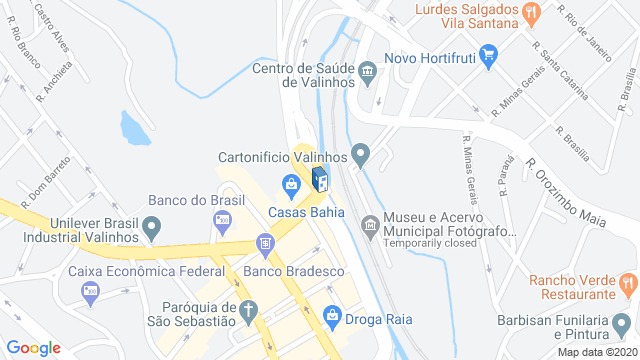 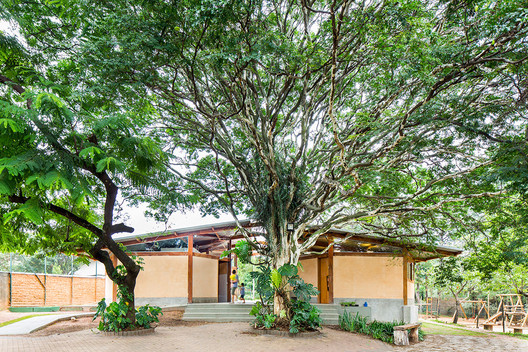