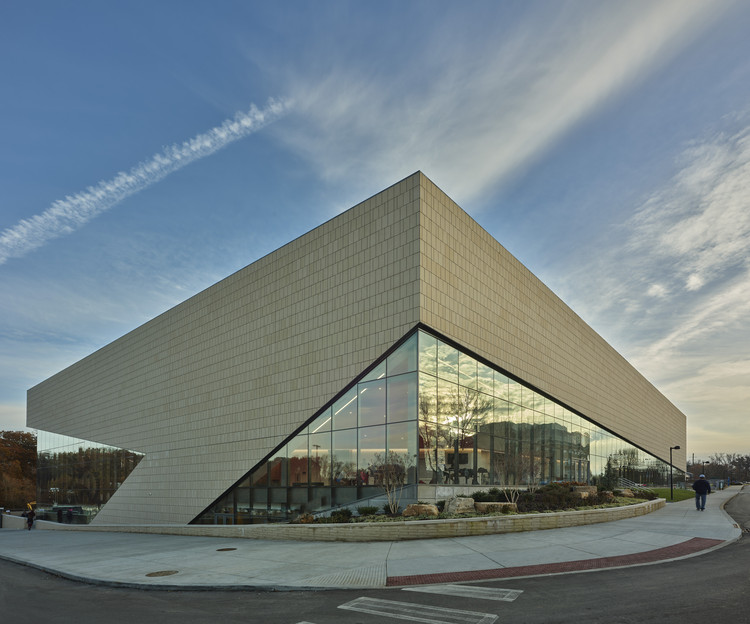 Text description provided by the architects. A pivotal project for the University of Southern Indiana (USI), Screaming Eagles Arena is an iconic addition to the campus that dynamically enhances student-athlete and fan experiences, bolsters athletics and academics programming, and best equips USI to recruit premier athletes.

Highly artistic, and purposefully communal in its design, the USI venue represents an exciting trend in the evolution of collegiate sports venues and spaces. The building is more than just a host for athletic competition, but an active ingredient in shaping USI campus culture. The building employs light, geometry, and texture to creatively nourish its location, maximize nearby synergies, and strengthen the institution by numerous measures beyond just athletics.

To lighten its perimeter, the solid mass of the building was lifted and replaced with clear glazing below, which activated the interior and exterior pedestrian experience. To the north, the building facade is lifted to allow light in, while to the south, the glass is brought down to minimize heat glare. The west facade effortlessly offers views inside to maximize a major public boulevard and campus walk paths. The building uses different geometry and building volumes to create engaging architecture for the campus.

Inside, the relationship between the building and its campus site are further refined with varying apertures throughout the interior concourse. The university colors play a key role in shaping user experience and guiding people through the building. Extensive stretches of red on the ceiling, walls and floor all interact for visual impact and wayfinding. This red blends into the seating bowl where the design brings all focus to the court and leading-edge fan amenities.

Surrounding the court are key spaces from box seats to a Varsity Club for alumni with preferred views and seating. These spaces enhance the building’s value and functionality as the varsity club can be converted to classroom space on non game days. The room can be used as one large space or divided into three separate class room zones.

The space focuses equally on student-athletes by offering locker rooms and team spaces with premier technology (to watch game film), custom details and woodworking, and unique lighting features. Even the hallway that extends from the locker rooms to the court is reimagined as an experience with USI imagery and custom graphics.

“This is such an important project for USI as it brings new energy, amenities and possibility to the campus and institution,” explained USI Athletic Director Jon Mark Hall. “We focused deeply on the experience this building could offer athletes, students, staff, visitors and sought a design solution that would positively enrich those respective experiences - I believe this project achieves on that mission.”

Already the recipient of a local design award, Screaming Eagles Arena was celebrated by the jury for how “this arena rethinks the arena type, producing an intriguing and enigmatic sculptural form. The mass of the building is opened up and activated through strategic and geometric use of glass and fields of red. The building is both restrained and bold at the same time. 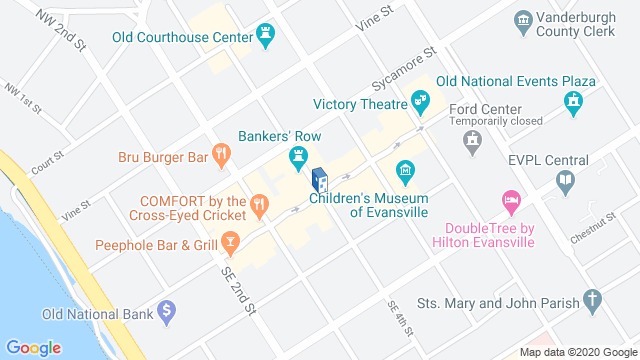