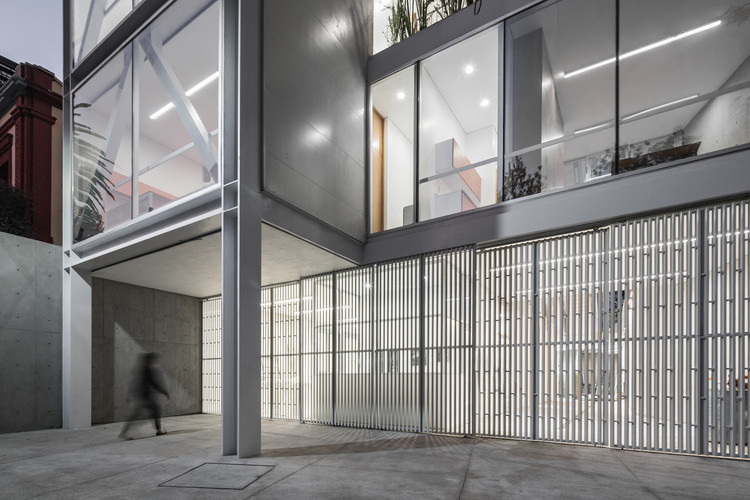 Text description provided by the architects. Jose Munoz Villers completes the first of two educational buildings for La Salle University in Mexico City. Both the Faculty of Chemistry and the Research Center, located in the Condesa neighborhood at the urban campus of La Salle University are the result of two winning schemes presented at architectural competitions held in 2017 and 2018 respectively and belong to the masterplan to be completed by 2030.

The 2,000-square-meter faculty building stands alone on an independent site outside the main university campus.

The sites urban context, orientation, geometry along with the FAR potential, specific seismic coefficients, program and architectural vision, translated into a slender building mass which attempts to reveal the construction process through its structural exposure and envelope´s layering.

The building connects with the ground through an urban vestibule which performs as an extension of the public space; that area is also designed to act as an extension of the regular classrooms to hold conferences or scientific-related exhibitions.  The ground floor vestibule features a grand stair which links to a more intimate hall on the first floor where administrative spaces are located.  A series of flying stairs running parallel to the building structure and facing an open space linking all the building levels are designed to experience the building from the exterior, connecting north to south and inside-out.

The building is designed to blur the limits between interior and exterior and enhances the dialogue between the architecture and itself with its context and the user. “The outside wall is no longer the first impression one gets of a building.  It is the interior, the spaces in depth and the structural frame which delineates them, that one begins to notice through the glass wall. Glass is noticeable yet not quite visible.  It is the great membrane, full of mystery delicate yet tough”.1

Fifteen seminar-oriented classrooms ranging from 30 to 40 student capacity are to accommodate 480 students and faculty members in 4 levels; the top of the building acts as an extension of the urban vestibule where cultural and academic events are programmed to occur.   Two hundred and fifty tons of structural steel with exposed columns, inverted V bracing, a double-skin facade comprised of an inner layer of lightweight concrete blocks, outer layer of insulated metal panels, insulating glass units at front façade, perforated metal sheet panels and reinforced concrete walls are the building tectonics which communicate an architectural, structural, spatial and program clarity and simplicity. 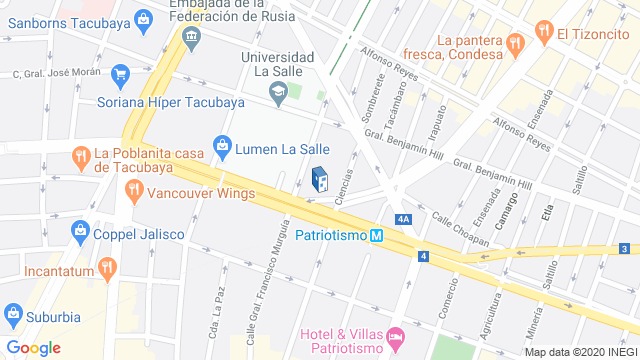 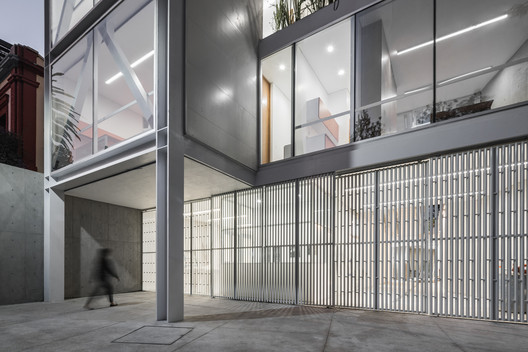