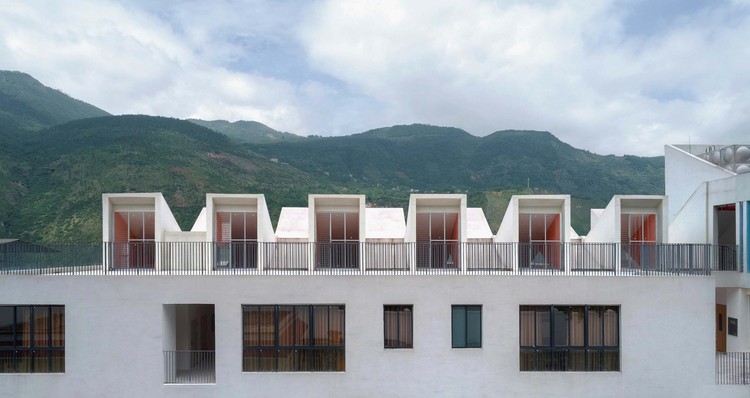 Text description provided by the architects. Wusihe Central Kindergarten is part of the One Foundation reconstruction program after the earthquake. Located in Wusihe township, Hanyuan county, Ya’an city of Sichuan province, it is the first public kindergarten in the township. Spread out on slopes of Dadu river tributary valley, the town is cluttered with buildings of mixed styles, without quality urban space. The design aims to insert the kindergarten as a brand-new feature to the town, to initiate enlightenment of its spatial character and to form a new spiritual and emotional center of the town; the child-friendly environment created will become a sanctuary of joy that children long for every day.

Mountains and platforms
The site is hidden behind shops and houses, accessible from the main road with a narrow strip of uphill trail. Our spatial strategy was to reinforce the mountainous feature. Two large platforms were organized in east and west based on the pre-existing site. The architecture massing is located in between, with layout surrounding the shared atrium, and ground floor and second floor connected with the two platforms respectively. Various levels of terraces and rooftop platforms convey the terrain topology in its architectural appearance.

Aggregation and ascent
Due to site limitations, an L-shape aggregative layout was adopted. The architectural massing was deliberately elevated to become the high ground and visual focus of the site.

Aggregation is further enhanced with the atrium, which becomes the spatial core of the entire building. Three stories of full-height atrium rise up to meet the skylight from above; intersecting and continuous clerestories bring in rhythmic sunlight. Sunshine is projected on walls painted with different colors in the morning and afternoon, highlighting the attribute of time in interior space. The spatial strategy of aggregation and ascent is also reflected in the exterior form with a strong sense of verticality. White façade contrasts with the greyish tone of the neighborhood, and bright colors on side walls are bursting with energy.

Center and orbit
As the center of the entire architectural behavior, the atrium establishes the lateral and vertical connections of indoor and outdoor activities. With children’s characteristics in mind, experiential pathways of interactive orbits are designed on all floors, linking the atrium to the outdoor space. Only a handful of functional rooms are set on the ground floor. An annular track runs from the outdoor to the indoor. The audio room is located in the center of the atrium, forming a theatrical space together with multistep benches, to serve as the activity center shared by the kindergarten and the community.

Crisscrossing corridors on floors around the atrium turn into spatial games of sight and action. Orographic wind is introduced into the atrium through the architectural openings on all floors, combined with clerestories, forming comfortable microclimate with excellent ventilation and lighting. 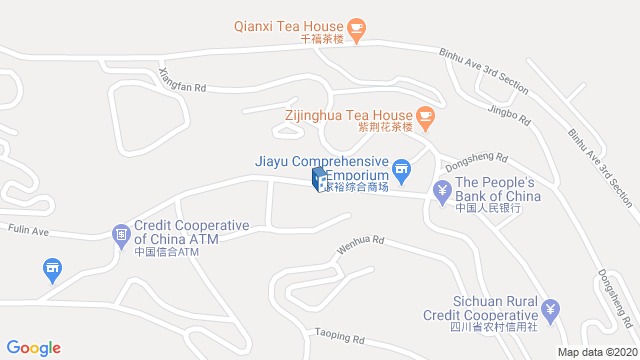 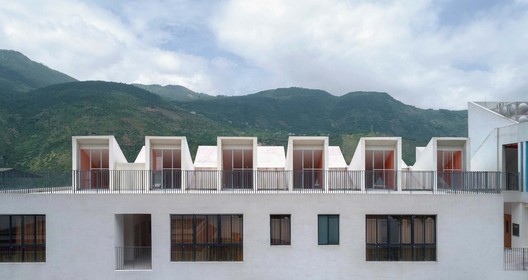