Save
Industry 4.0: A New Relationship Between Factory and Society
Share
Or
Copy

For some years now, a key issue in European debate has catalysed the attention of economists, sociologists, technologists, policymakers and trade unionists: Industry 4.0. Established in Germany in 2012 and initially discussed in an almost exclusively technological key, the issue has overwhelmed the political agenda of the main European economies, stimulating industrial policies and state support, but also provoking heated debates on the future of work and on the new relationship between factory and society.

I was lucky enough to start seeing this transformation up close, in Italian enterprises, even in “unsuspecting” times (before the “Industry 4.0 National Plan” was released in Italy), in 2014 with some initial research on large enterprises having production sites in Italy [1] and then, between 2017 and 2018, with some research dedicated to the more typically Italian “fabric”, the SMEs of Made in Italy [2].

Since then, studies in this area have multiplied and spread in every industrialised country. The reflection on this transformation, initially interpreted as a “simple” technological fact, has begun to stratify questions (and some responses) relating to the impacts on work, individuals, and environments, both physical and digital, defined by the changes taking place.

The label “4.0”, or that of “smart factory”, brings together complex processes that, seen in their concrete implementation within enterprises, appear in many contradictory manifestations. “4.0”, far from being a model, is composite geography that is differentiated by managerial culture, organisational development, technological choices, the role of workers, regulatory models, and trade union perceptions.

Some major questions recur in the debate: What are the real risks of the replacement of work by robotics or artificial intelligence? What is the role played by individuals in the transformation of processes and products towards a new idea of industry? Will “smart” factories (thanks to the profound digitalisation of processes and the closer connection between production and consumption) once again play a central role in contemporary cities thanks to their greater environmental sustainability?

The complexity of this transformation can be simplified by describing it as the systemic digitalisation of production and consumption. Inside factories, it corresponds to the merger between the real world of production systems and the virtual world of digital information. 4.0 factories are hybrid, cyber-physical environments, home to a network of machines, real assets and virtual objects, calculation and memorisation structures, communication devices...people. Outside factories, consumer goods and services acquire processing capacity and generate data flows that can be reconnected to production, making it “dialogue” (flexible, adaptable, customisable). The enabling technologies are well-known: Internet of things, big data, additive manufacturing, virtual and augmented reality, artificial intelligence, and cobots (collaborative robots).

However, “4.0” also, and above all, means new business models (such as those based upon “saleability” and the value creation of data generated from the digitalisation of production and consumption) and new organisational models (new organisational forms able to learn, do collective experimentations, make mistakes and correct themselves very quickly).

Finally, it means work which is changing: is lost, is modified, is re-invented.

Although a broad range of managerial and journalistic literature agrees on the fact that we are facing a smart development of industrial production, it is actually problematic to draw from the many interventions on the matter the traits of an agreed model, as, in many ways, was the case for Taylorism in terms of mass production. The concrete evolution of the smart factory is characterised by the proliferation of solutions, as the solutions adopted by a group, even broad, of enterprises, are not necessarily valid and generalised within the production world.

There are also variables that significantly influence the technical-organisational-social models, such as the territorial variable that calls into question the geography of the international division of work which the globalisation of production markets has made more mobile and articulated. Although not in a linear way, the innovations introduced by organisational solutions and smart factory technologies can bolster trends and actions already implemented for some time within enterprises, as well as affirming new ones. The case studies of our research also suggest any result in the 4.0 industry world is not taken for granted.

An issue closely related to the smart factory debate concerns the position occupied by industrial production in overall social relationships; in other words, the relationship between factory and society, within which there is a new reflection on the relationship between factories and urban spaces, cities. The emphasis of the strategic documents, studies, and interviews implemented for our research on a rediscovered role of industrial production in European economies reflects the desire to re-launch sectors that, for decades, have suffered a reputational declassification as opposed to other productive and social universes. The factory has been expelled from cities, as it is polluting, it is cumbersome and  it needs to be where there are communication flows and large transportation arteries, previously only physical but now, also and above all, digital.

But precisely the smart factory is to the smart city what the Fordist factory was to the twentieth-century city. The Fordist production model created the large urbanisations of the 1900s and moulded the social life of modernity. The factory gave shape to society and to urban spaces. Now, the opposite is happening. Industry 4.0, which incorporates technologies already present in the spaces of our daily personal and social lives, rather seems to be moulded by society, by the practices of people in the spaces of “non-working” life (once, that would have been the case; now, the boundary between life and work tends to be much more blurred). Consider, for example, our personal digital devices which promise to change the way of working and conceiving production, primarily through human-machine interfaces of digital media developed for the consumer world, which are now entering the factory through the front door [3].

It is society, with its spaces, flows, and digital cultures, that is infiltrating factories and moulding them.

In addition, while, from the end of the 1970s, the factory seemed to be dematerialised, it is now returning in its concreteness, physical or digital as the case may be. Hence also the attention dedicated to the design of buildings, machines and robots: the factory is becoming a place to be shown off, its aesthetic form an element of competition, such that stars of the architecture world are asked to design it. Consider also collaborative robots, equipped with a sensitive “epidermis” so as to be able to interact with the worker, in “hand-to-hand” actions. The workplaces of the 4.0 factory have aesthetics very far from the twentieth-century Fordist image: they become clean, production chains are established that look like showrooms, where even the machines become “beautiful”.

However, the desired new centrality of industry in economic structures that imply a qualitative increase in productions, processes, knowledge and greater energy-environmental sustainability is not necessarily synonymous with a new centrality of factories in society. In the sense that factories of the future are described, and imagined, as capital intensive spaces, crossed by flows of data from and to the market, with reduced (and increasingly customised) production volumes, harmoniously inserted into the territory, but unlikely to be large workforce catchment areas. Their significance, therefore, will depend upon the possibility of becoming the engine of processes generating knowledge and the field in which collective knowledge precipitates and the chain between science, applied research, design, production, distribution, and consumption is shortened.

The substantial core of the smart factory is this, at heart: the smart factory is to mass customisation what the Taylorist factory was to mass production. The technical possibility of obtaining high levels of efficiency in the use of flexible and multifunctional systems and of monitoring markets and dialoguing with customers, with limited costs, facilitate higher levels of integration between enterprises and consumers, between factory and society, between production and circulation. The explicit objective of smart factories is to create a linguistic chain in which information is translated no longer only by workers, but also by machines. An additional objective is for the product itself to act as a collector of data and information in order to transfer them to the production process.

Here is one of the crucial issues of Industry 4.0: by transferring communicative and cognitive powers to smart and flexible production equipment, the rigidity and sequences that restricted the level of use of systems can be broken, producing new possibilities of customising the process based upon the product.

The outcome is a rapprochement, not without frictions, between the space of factories and society, between workplaces, living spaces, and urban spaces, united by the same linguistic code - digital - which makes them porous, permeable, interwoven, by digital flows of data incorporated in the materiality of spaces, people, machines.

Tatiana Mazali, sociologist of cultural and communicative processes, researcher at Politecnico di Torino, lecturer in Cinema and Media Engineering.   Her research interests involve the context of digital culture, media languages and work transformations. Since 2007 she is co-director of the platform for digital creativity Officine Sintetiche. She has been a researcher at the École des hautes études en sciences sociales, the University of Plymouth and the Universitat Oberta de Catalunya. 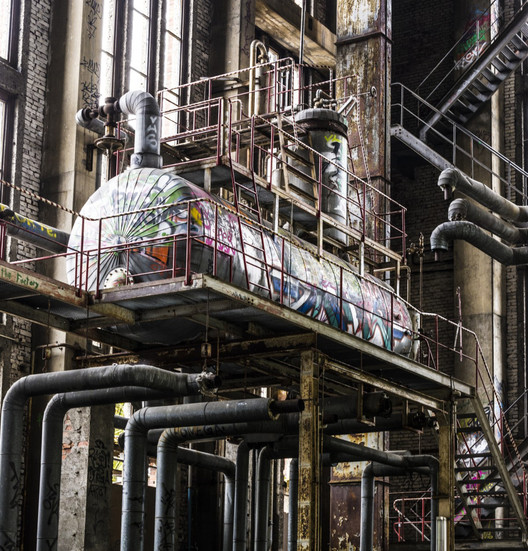