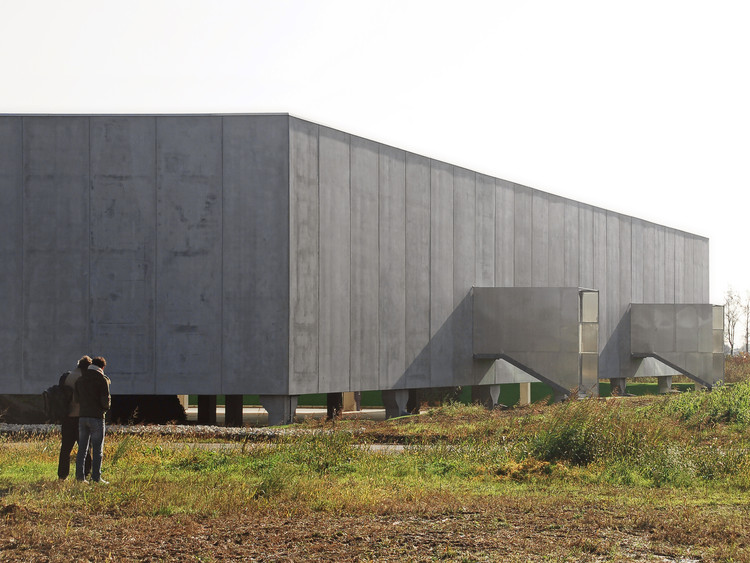 Text description provided by the architects. The Green Village is a garden center located in the eastern industrial area next to the municipality of Cittadella, in the province of Padova. It has a strategic position in relation to the main roads and it attracts a catchment area that extends between the provinces of Vicenza, Padua and Treviso. The complex is made of three parts: the commercial building, the greenhouses and the park.

The mall has been conceived as a clear and essential parallelepiped made up of two levels connected by a central green courtyard that opens toward the sky. At the basement there are a parking area and the access to the upper level, while at the ground floor there are a large sales area and a relax zone. The façade pulls back on any opening in favour of a blind geometric solid, whose only exception is given by the security entrances and exits. They are shaped as portals with their own volume thanks to a metal cladding superstructure.

The correct supply of air and light is given by the combination of two factors: the shed roof and the central patio. The former guarantees diffused and uniform light throughout the day and the latter, thanks to its full height, is the true core of the construction. The building emerges as an introspective architecture, open inward like a Roman domus. The patio is the heart of the whole organism and the spot around which the plan generates: it is not a subtraction from the volume, but the space from which the building develops in a centrifugal way. The four corners present the only pillars in the building, except for the perimetral ones. They are necessary to the structure while leaving the rest of the plan free to be used as an uninterrupted space.

The indoor façades are to contain an open-air room framed and visible from every point of the building. Also, due to the nature of the activity, the patio works as a showroom indefinitely repeating, where it is possible to display a selection of products, while recreating an internal garden in contrast to the surrounding industry.

This is a simple, economical and fast construction architecture made through the use of prefabricated elements which led to the creation of generous and flexible retail spaces, also in response to the need of the client for any rearrangements or changes to the shop layout.

After a historical study of the underlying aquifer, the parking area has been set to a safe quota below the ground level, thus obtaining a large covered area that benefits from natural light and ventilation. At the same time, the 1.5 m height gap that is created between the road and the access lightens the visual impact of the large solid, making it float, although only prospectively. 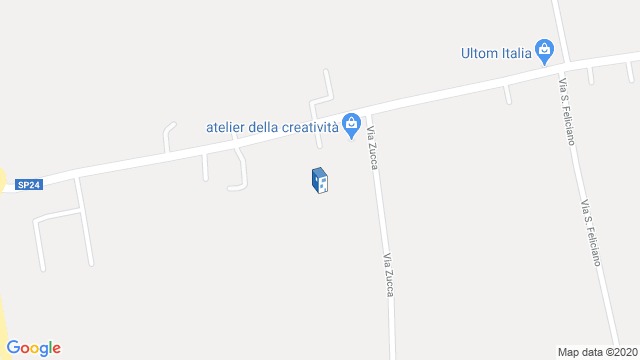 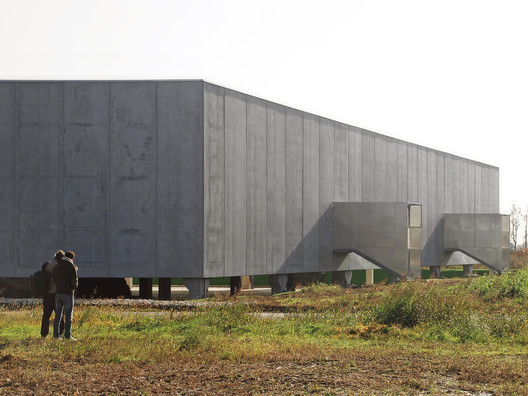