The northern side of the Rectoría tower in the Ciudad Universitaria, the main campus of the National Autonomous University of Mexico, emanates a particular Mexican character. It is a classic example of modern architecture that integrates architecture with sculptural and pictorial elements that denote the university's mission to carry and preserve knowledge, history, and Mexican cultural identity through the ages.

The creation of the UNAM tower's emblem was assigned to Juan O’Gorman, Gustavo Saavedra, and Juan Martínez de Velasco, who later brought in Juan Íñiguez, Rafael Carrasco Puente, and José María Luján as advisors for the project. 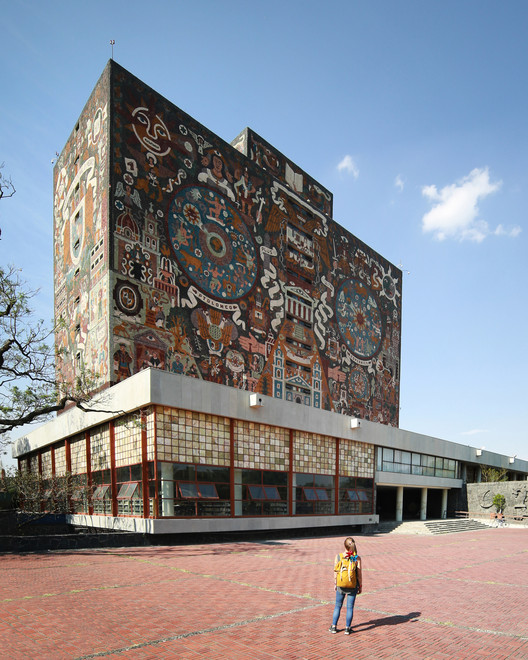 O’Gorman incorporated many elements of the Functionalist movement into the project, the most obvious being the meticulous attention paid to the activities that would take place inside the building. This resulted in a open-floor plan, Corbusier style structure that would usher in a new paradigm for modern Mexican architecture in the 1940s and 50s.

The construction, beginning in 1950, was located on a 16,000m2  area destined to become the Library and National Archives; however, in the end, it became solely the Central Library of the Ciudad Universitaria. The building consisted of 10 restricted floors dedicated to document archives and a ground floor opened to the public.

The space was planned to house over one million volumes, and the original project was organized by sections for periodicals, reserve, book borrowing, and consulting.  These last sections were to be put next to lecture halls on the main floor in an area that would separate the public spaces from the restricted areas of the tower.

Build on the rocky terrain of the Pedregal de San Ángel, the ground floor is designed like a base surrounded by slopes created the topography of the surrounding land. The public areas house the lecture halls and the reference books, making protection from the sun necessary for this part of the structure while simultaneously maintaining a bright, open, and comfortable atmosphere.

The space's sun protection is achieved by stained glass windows, which block direct sunlight from entering the building. The windows give the light that enters a brown and yellow tint, which, along with the contrasting shadows, gives the space a unique atmosphere.

The building was designed to achieve total symmetry by using cubical shapes, columns and free facades. The floors holding the private archives, the same as those found in the tower, emphasize natural lighting and circulation, where as the tower is completely closed off, with no windows to let in light.

The result is a completely walled-off interior, which gave Juan O’Gorman four canvases on which to put something truly extraordinary.

With a such a large canvas to work on, O’Gorman proposed a mural with colored rocks that would combine the soul of the university and Mexican identity.

Because of the prohibitive costs that such a mural would accrue, O’Gorman decided to turn to the same techniques used in the Anahuacalli Museum project, the same museum where pieces from Diego Rivera's pre-Columbian collection are housed.

During his work with Rivera on the Anahuacalli museum, O’Gorman became familiar with the properties of volcanic rock and its ability to be painted. This made it the natural choice to use in constructing the mural.

Once the question of what materials to use was resolved, the architect had to come up with the final concept that would define the character of the mural for the Central Library.

The central theme of the mural is the evolution of culture. In the upper part you can see the cosmological symbols. On the north-facing mural, you see figures from Pre-Hispanic culture. On the southern side, you see elements of colonial culture. On the remaining sides, you see references to modern culture as well as the atom as a cosmological symbol for our time.  On the western side, we originally wanted to illustrate the Newtonian concept of universal attraction but we decided to change in order to make space for the university's seal and motto, which, in my opinion, should have gone on the rectory building.

In 1947, plans were laid for the Ciudad Universitaria, which would soon become one of the most ambitious public projects in Mexican history. It served as a symbol for a new model of education that would drive the country forward while also solidifying the new national identity. O'Gorman's mural aimed to highlight this identity, illustrating UNAM's role as a vessel of science, history, and knowledge in modern Mexican society.

Inaugurated in 1956, this emblematic architectural wonder continues to serve as an intersection for history and modernity and, through its sculptural and pictorial elements, forms the identity of the National Autonomous University of Mexico. 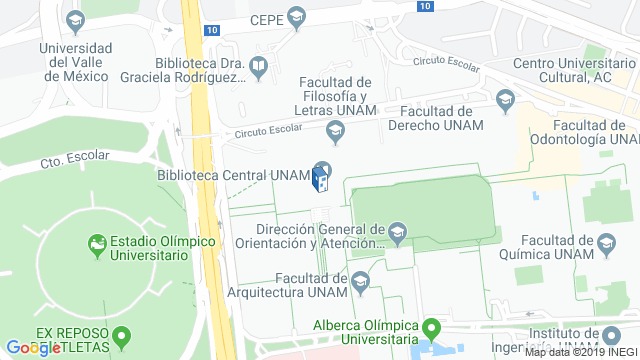 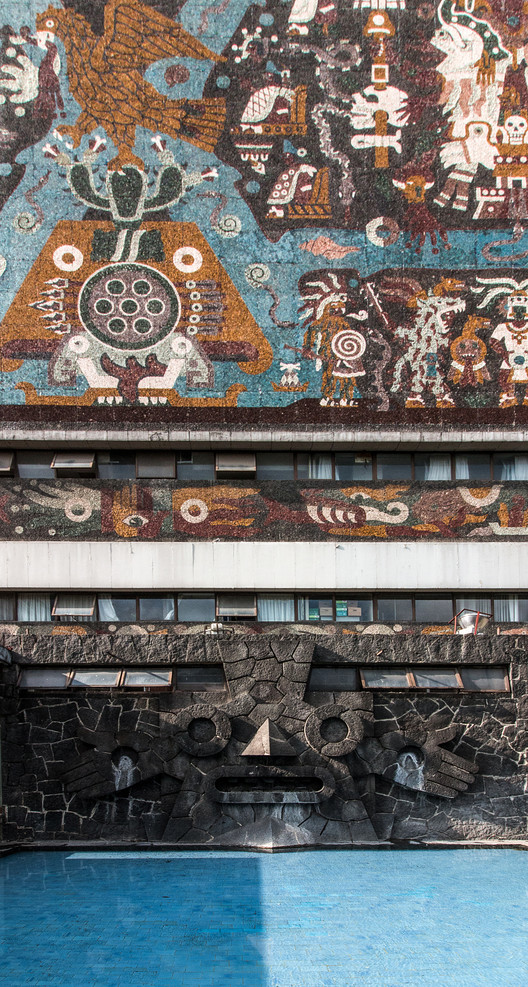