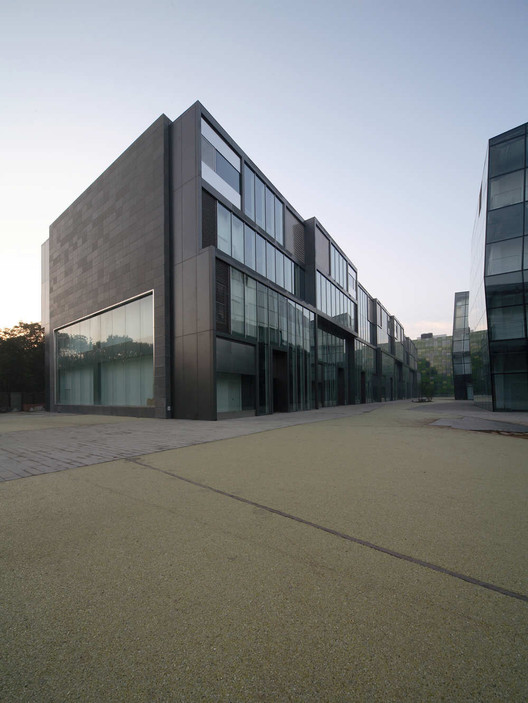 In 2005, one of the developers in Beijing has contacted and asked us to introduce them a Japanese architect who are expert on designing commercial buildings. When I have talked to some architects, Mr. Kengo Kuma immediately responded first. Because the clients were also interested in him, they consigned Mr. Kuma as a main architect for this project. The Sanlitun VELLAGE project is structured with two sites, which are the North and the South districts facing on the Sanlitun Street. The architecture office from Hong Kong has already designed their master plan for both districts.

Our EAST building on the North district has a design concept of “jelly façade”. This is about thick transparent spaces that sandwiches both sides of the building. Three to four meter thick jelly façades are attached on the East and the West side of building, which is constructed with roughly seventeen meter concrete main structural frame. The first and second floors are for commercial purposes, and the third and fourth floors are for office functions, so that building programs are vertically divided in two functions. Each of eight tenants is provided with thirteen meter wide space. The hundred meters long building elevation is divided in 2x8=16 tenants. By changing the thickness of those each jelly facades, the uneven surfaces on the elevations appear on the East and the West.

The size of the elevations for each sixteen tenants is thirteen meters wide and nine meters tall. Moreover, additional small boxes are installed on those each elevations. The facades on the first and second floor have small boxes as if they are placed on the floor. The façade on the third and fourth floors have small boxes as if they are hanging from the roof top. The actual jelly façade is composed of steal frame structure and those small boxes are also made out of steel frames. The structural systems for these boxes are the same as they look on the exterior. Boxes of the commercial part (first and second floors) are structurally placed on the first floor, and boxes of the office part (third and fourth floors) are also structurally hanging from its roof floor.

There were two problems on the design stage. One is to think about how those two different functions of office and commercial programs coexist in one building. When the commercial facilities become more luxury, the interior space becomes more closed. On the other hand, it is easier to sell office space as the luxury property, by making it open. Therefore, we faced on a problem of how we can let the closed commercial space and the opened office space coexisted. The jelly façade is three to four meter thick buffering space, and is the half open and half closed space between the interior and the exterior spaces. This buffering space functions as the entrance hall and the show window case for the commercial floors. It also functions as public hall ways and small meeting room for the office floors. Thus, this buffering space are not only acting as opening and closing spaces but also acting as the intermediate for commercial and office functions. By applying this “jelly façade” on the exterior wall, the office and commercial part of the entire façade do not separate but rather merged into each other.

Another problem was how to keep the independency of each tenant. It is luxury brands’ ideal to have their own individual store building on streets. However, because there are not many small individual brands’ architectures in the centre of the Beijing city, most of the international luxury brands move into a large building as its tenant. Although those tenants use only a part of the building space, the more luxury the tenants are, the more they want to stand out from the others and have their distinctive façade for their stores. The developers for this project had requested us to make the each façade for those tenants space highly distinctive. “Jelly façade” kept its individuality for each tenant’s facade by creating uneven surface on it. By doing so, people can easily recognize their own stores and offices, looking at the building façade from the outside view.