Save
Shining Constellations: Maps Show the Population Distribution on Earth
Share
Or
Copy

Hungarian analyst and cartographer Robert Szucs shared with ArchDaily another of his series of maps, this time addressing the population distribution on Earth. A large blackboard, identifying only the geopolitical boundaries of countries and continents, reveals bright constellations, representing human agglomerations and the world's great voids.

Available on the Grasshopper Geography project website, the maps draw attention to the discrepancy between densely populated areas and others practically empty. Asia stands out, accounting for more than 60% of the world's population, featuring large bright patches on Szucs maps, mainly in India and Southeast China.

Africa, on the other hand, ranked second in the list of most populated continents with over 1 billion people according to UN data, shows weaker patches – possibly a result of the recent unbridled growth of its urban areas.

"The information is quite diverse, most of it comes from censuses, NGOs, etc. After finishing my other three types of maps, rivers, forests, and topographies, I felt it was time to focus on some maps related to humanity. I had in mind this idea of creating population maps as if they were star maps – Africa is one of my favorites, it is almost like looking at nebulae in space!" – Robert Szucs

Here are some of the population density maps available in Grasshopper Geography: 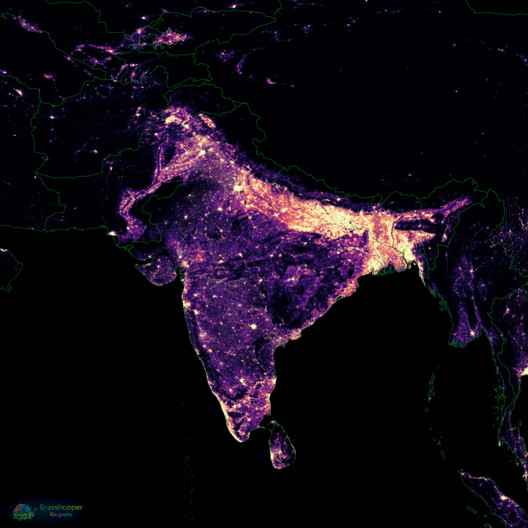