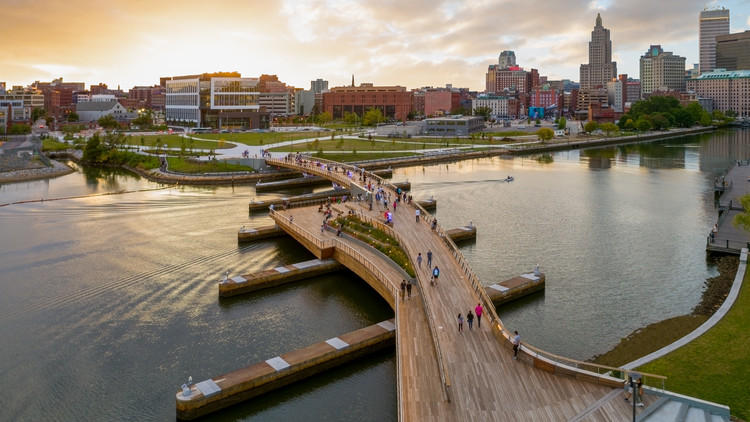 Text description provided by the architects. In the mid-century, Providence’s cohesiveness was abruptly interrupted by the construction of Interstate I-195 which severed the main city District and the riverfront from the downtown core. In 1995 the Providence Foundation and the City of Providence requested the relocation of Interstate I-195 to reconnect and reactivate this marginalized portion of the city. Following the extensive planning efforts of several public agencies, foundations, business owners, residents, and non-profit institutions, the district has been reconnected and a city is emerging that did not exist a decade prior. In August 2019 the Providence River Pedestrian Bridge opened and the substantial increase of activity that followed is clear evidence of how smart planning and thoughtful design can yield catalytic results, both social and economic. Performing as an urban mediator, the bridge not only creates a direct connection between new waterfront parks but has also generated numerous opportunities for economic growth and programmatic interventions to encourage community connection and social engagement.

As a part of the Waterfront Park Master Plan, the Providence River Pedestrian Bridge had a significant responsibility to unify the East and West Park spaces into an integrated public environment synthesizing both urban and natural conditions. The alignment of the bridge simultaneously considers fluid movement through the city, orientation, and views during the procession, and frames of view toward the bridge as an artistic object itself. Circulation of pedestrians and cyclists is thought of as a series of tentacles gathering and dispersing travelers from numerous regions and directions. The east side of the bridge splinters into varying directions indicating subtle axis towards James Street, Transit Street, and continuity of movement along the riverfront walk to both the north and the south. The west side abuts a 4.5-acre park that is designed to enhance views and connectivity to the downtown, riverfront walk and burgeoning development in the Jewelry / Innovation District.

The form of the pedestrian bridge is characterized directly by programming considerations, the orientation of access, views (urban and natural), and the amazing dichotomy between the history of Providence and the future of innovation. From 17th and 18th century tall ships to late 19th and early 20th-century jewelry factories, timber construction characterized much of the celebrated beauty of historical Providence. Wood construction is still prized today for its old-world character and warmth. With modern innovations, this exceptionally versatile material was used to capture formal characteristics reminiscent of historical ships while simultaneously transitioning into an innovative contemporary solution. The Providence River Pedestrian Bridge is immersed within a duality of synthesizing the traditional materials of granite and wood into programs that can feel both substantial and fluid, weaving an occupiable ground plane into a seamless connection between the east and west. The project results have been cited as a precedent-setting solution for a number of bridge projects due to this innovative re-use of abandoned public infrastructure.

The programming of the pedestrian bridge magnifies the connectivity of residential districts, commerce, tourism, and culture. Further, it opens the potential for environmental interpretive nodes educating both residents and visitors about the history and ecology of the Providence, Seekonk, and Taunton Rivers, as well as the Narragansett Bay.

The success of the City of Providence developing arts, culture, and tourism coupled with the vision for the Waterfront Parks has allowed the city to continue emerging as an international cultural destination. The approach to the bridge design considered the momentum generated through numerous events and festivals that identify with the past, present, and future of the city, such as Sound Session, PrideFest, PRONK!, and the integration of WaterFire. The bridge manipulates form to create occupiable zones with significant frequency, thereby maintaining a connected urban space from DownCity and the Jewelry / Innovation District into the West Waterfront Park and over to the East Waterfront Park. 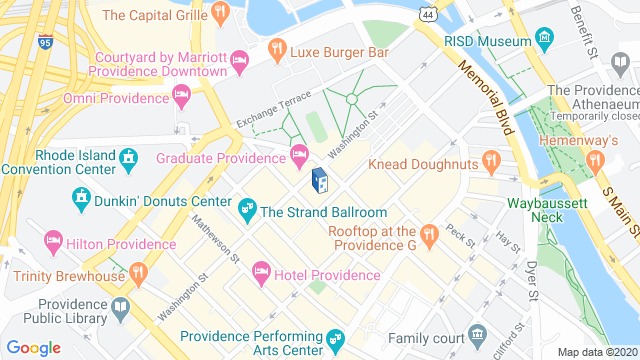 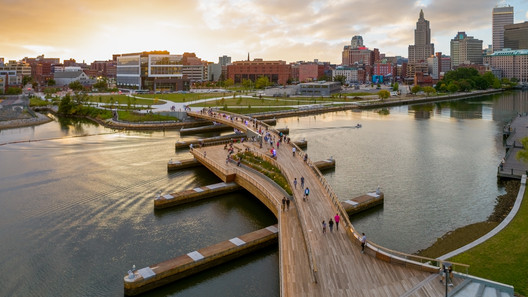