Having access to a bathroom is, above all, a factor of dignity. As basic as this fact may seem, the WHO (World Health Organization) estimates that 2 billion people worldwide do not have access to basic sanitation facilities, such as bathrooms or latrines. Such inadequate sanitation causes 432,000 deaths annually, mainly from diarrhea, in addition to being an aggravating factor for several neglected tropical diseases including intestinal worms, schistosomiasis, and trachoma. In 2010, the UN (United Nations) labeled sanitation a basic right, alongside access to drinking water.

Although today the bathroom is mostly private and reserved, this arrangement has not always been the case. In Roman civilization, collective latrines were also places for socialization and debate. Barbara Penner [1], professor at The Bartlett School of Architecture, UCL, points out that “No less than the rise of the field of public health, it was the modern invention of privacy that caused a decisive break with earlier attitudes toward the body that had marked much of human history. [...] But the rise of privacy has resulted in the general privatization of western bathing, though this did not happen evenly or all at once. And given that private was increasingly equated with exclusive, it is not surprising that private and often very luxurious bathrooms first appeared in European aristocratic or bourgeois homes. Up until the 1920s, and sometimes well after that, the urban and rural poor were mostly left to carry on as before with communal privies (which remained sites of socializing) and public bathhouses, showers and swimming pools. But privacy and related concerns about decency began to shape these establishments, too; communal privies were downsized and public baths were more rigorously subdivided to ensure the segregation of men from women, and, with partitions and cubicles, men from other men and women from other women." The concept of private bathrooms inside buildings is not, therefore, as old or as natural as many would think.

Furthermore, when talking about bathrooms, important cultural differences must be addressed. The sitting toilet is common primarily in the western world. In the east, most people use the squat toilet, which requires users to crouch rather than sit. The organization of the private bathroom to include a toilet, a sink (washbasin), and a shower, bathtub, or both is also not widespread in the world. In some countries, the toilet space and the bathing space are divided into two separate rooms. Finally, in some cultures but not others, the use of bidets remains popular.

Being one of the smallest and most complex rooms in a residence, and containing complicated equipment and several hydraulic installations, it is essential that the bathroom is carefully planned. Barbara Penner goes even further to indicate its importance by writing that “The bathroom connects our daily domestic lives with large-scale infrastructures of water, waste, and sanitation.” Even though most clients and architects are aware of the bathroom's significance, it is often reduced to its minimum size in service of other spaces. Yet because the bathroom is so essential and so consistently used, some considerations must be addressed to make it comfortable, even if it has very small dimensions. A poorly designed bathroom can be a huge hassle, as well as being costly to make further changes. We have already covered how to design accessible, safe bathrooms for the elderly, and even predicted what they might look like in the future. This time, we will cover the minimum and ideal dimensions for residential bathrooms.

Taking the common bathroom organization that includes a toilet, washbasin, and shower, it is possible to design a functional bathroom using only around 2.4 square meters. Even when the intention is to design a minimal bathroom, architects must keep in mind that some measures are vital, especially the free space to be left around equipment. The figure below shows the minimum possible and ideal dimensions to be left for the adequate use of toilets, washbasins, and showers respectively.

With these dimensions in mind, it is possible to develop different configurations, which should be suitable for every common scenario and account not just for equipment but for the location of windows, doors, structure, and even sewage points. The possibilities are diverse, but two traditional plans for small bathrooms are shown below. The square configuration allows for very minimal measurements, but it compromises the space of the shower, which ends up in a corner. In this case, the architect can barely leave the minimum space required for a shower with sliding doors or hinges.

In the rectangular option, the circulation space is more limited, but the shower area ends up being freer. This even allows architects to dispense with the use of a shower stall, saving a few precious centimeters and some money. In addition, its length generally matches better with the size of a traditional bedroom, which can facilitate a more cohesive plan.

In both cases, it is possible to change the placement of certain elements, even doors. It is generally more pleasant, when opening the bathroom door, to see the washbasin than the toilet. But each architect has their preferences and tricks when it comes to solving bathroom plans. As long as precautions are taken, the possibilities are manifold.

* The intention of this article is to present minimum dimensions for extreme cases, where the available square meters are not enough to incorporate all the necessary services with ease. It is important to note that there are countries with specific regulations that, of course, must be strictly respected, especially embracing universal accessibility. Please check out some useful links: 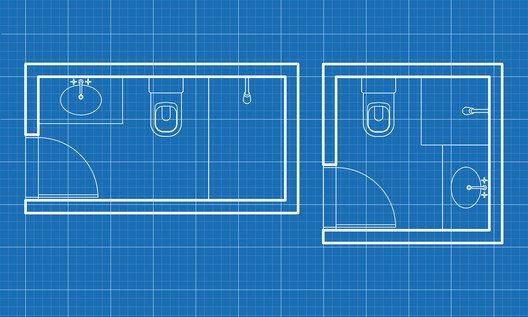