Save
Kristin Feireiss on the 40 Years of Aedes, Women Empowerment and the Future of Architecture
Share
Or
Copy

With 500 exhibitions over the course of 40 years, the independent institution for contemporary architecture, urban design, and related topics carried out autonomously without public funding, driven by the cutting edge, best practices, and visionary concepts from around the world. Under the co-direction of Kristin Feireiss and Hans-Jürgen Commerell since 1994, the public cultural space encompasses nowadays 600 square meters of exhibition, event, and office space.

In celebration of the 40th anniversary of Aedes, the forum that followed architecture “from Postmodernism into the Digital Age”, ArchDaily had the chance to talk with founder and director Kristin Feireiss, about the world’s first private architecture gallery, 40 years of experiences and achievements, empowering women in the field and the future of architecture.

About the Inception of the Center

ArchDaily (Christele Harrouk): Can you tell us how did it all start? What was the initial need that led to the conception of the Aedes Architecture Forum? What was the purpose of the center at that time?

Kristin Feireiss (KF): To start an architecture gallery called Aedes - by the way, the first gallery in the world - without being architects was a crazy idea and somehow naive endeavor. It was in 1980. With a background as a journalist, I was working in publications at the International Design Center (IDZ) and my partner, Helga Retzer, who sadly passed away in 1984, was leading the program at the DAAD Gallery. For us, architecture especially during the time of Internationale Bausstellung (IBA) was not a subject only for architects but also and mainly for the public. We wanted to develop an awareness that architecture and the built environment are part of daily life. Exhibitions were the right tool to present this message. From the very beginning to this day, I see architecture as an essential part of social and cultural identity. We opened Aedes with the master plan from 1957 by Alison and Peter Smithson Berlin Hauptstadt. We received international attention with our second exhibition In Memoriam Kongresshalle Berlin right after this building by Hugh Stubbins collapsed in 1980. In handwritten letters, we asked architects for visions of what to do with this symbol of American-German friendship. We were thrilled by the responses and drawings from architects from all over the world like Cedric Price or Raimund Abraham. Solo exhibitions by OMA, James Stirling, and others followed.

About the 40 Years of Aedes

AD: After 40 years, how do you describe the evolution of the center? If you look back at everything that you have accomplished and all the obstacles that stood in your way, would you retrace and follow the same path?

KF: Absolutely- I would do it again - with all risk but with all fun and the same passion. In striving to enrich the debate and broaden the perspectives in Berlin by presenting exciting examples of architecture and urban development from around the world, fairly soon Aedes in turn became an important international barometer for sophisticated design for the world. Years later we realized, Aedes was a role model for many other institutions. Terms like transdisciplinarity, networking, or participation were not invented yet but we applied them already with a kind of 'natural necessity '. Aedes grew to a center for public debate at Savingyplatz in conjunction with the surrounding universities and bookshops. After the reunification of Germany, Aedes became a driver of development in East Berlin, and finally, it ended up with a hub for international education and exchange. That is where we are now!

AD: Celebrating cross-disciplinary approaches since day 1, how did you, understand the need and importance of this kind of attitude, when creating your platform 40 years ago? How did you help spread this relatively new ideology?

KF: At that time and partly still today, even planers and architects did not communicate with each other very much, rather than with others who were committed to the making of the city. In discussing 'the city' as a whole, cross-disciplinarily is the essence of our program. This has created the diversity and dynamic of the program. Later with the ANCB, The Aedes Metropolitan Laboratory -also an experiment- founded in 2009 by my partner Hans-Jürgen Commerell, we institutionalized the cross-sectorial exchange as the catalyst to create a common language and understanding between the experts and the public in the aspiration to find answers for the pressing questions of urban co-existence.

AD: You tackled the notions of urban design before anyone else. Why do you think it was important from the start to bring together architecture and urban design? And not focus solely on the architectural part?

KF: The complexity of agglomeration and city attracted me from the very beginning although the subject was quite abstract and difficult to exhibit in a stimulating way for the public. Though the topics of the exhibitions were often about architectural projects, there was an immediate kind of ‘natural demand' to discuss it in the context of the city. An architect is only one actor on the stage of the city. Our target is not to provide a platform primarily for this profession, but mainly for the public, and therefore the city.

About Women in the Field

AD: As a highly successful woman in the field, and a female architecture curator, writer, and editor, how do you think your position, influenced women in this sector? Can you also tell us how has the center contributed to the empowerment of female architects?

KF: I always supported and encouraged women in architecture; not because of their gender, but because of the quality of their work. In architecture, as in many professions dominated by men, women are still underrepresented having a much harder time getting outstanding commissions. Zaha Hadid was and still is my idol. She was marked as a "Diva" who could only draw beautifully, but Zaha never gave up on bringing her architectural visions into realizations. We met in 1983 during the preparation for her exhibition The Peak Hong Kong Competition at Aedes and remained friends ever since. The Aedes exhibition and the accompanying catalog was the first-ever presentation of her work. In 2017, when I was asked to give a lecture on Women Architects at the Deutsches Architekturmuseum (DAM) in Frankfurt, I went through our archive and have realized how many exhibitions of female architects like Elizabeth Diller, Kazuyo Sejima, Tatiana Bilbao, Louisa Hutton or Dorte Mandrup we have shown. We are glad that Aedes can offer women architects an international platform to present their ideas, concepts, and projects.

About the Biggest Achievement

AD: Can you share with us one of your proudest moments/events/publications or even encounter during these 40 years of Aedes? What is your biggest achievement?

KF: Interesting Question! People I am close with, know that I put my family first. I am very proud of our patch-work family that I am also incredibly grateful for. But I assume this was not the intention of your question?

Concerning Aedes, it is still astonishing for us to see the input our exhibitions and public debates have on people of different generations and backgrounds. To me, pride and privilege stand together: We are proud of contributing, for 40 years and with about 500 exhibitions and numerous public debates, on the discourse of what city is and should be. We are proud of the trust the architects put in us and that Aedes received a worldwide reputation.

I was of course proud, when I was invited to become the director of the Netherlands Architecture Institute (NAI) in Rotterdam - from a gallerist with two people to a manager and curator with more than 100 employees. My most memorable encounter was talking to Nelson Mandela in the context of the exhibition Blank-Architecture. Apartheid and After, that I had initiated at the NAi. I am proud to become a member of the Pritzker Jury, proud to receive the Federal Cross of Merit of the Federal Republic of Germany and proud to be appointed as Knight of the Order of the Netherlands Lion. But through all these awards and honors, we are most proud of how these awards emphasize the importance of architecture culture. Last but not least, I am proud of all the honors and the recognition Hans-Jürgen and I received over the years and for the collaboration with and the generous support of companies like Zumtobel, Carpet Concept, Schindler, Cemex, and Camerich.

AD: How do you imagine the center after another 40 years? What does the future hold for Aedes? In parallel, how do you predict the future of architecture?

KF: You know, everything has its time and Aedes will have to react to new challenges not only in architecture and city planning but also in social and political fields including the impact of immigration, environmental and sustainable demands. So, let’s move to the next four to ten years. We have already some great topics between spatial design and societal coherence.

The future of architecture? In my opinion and based on my experience, the time of the so-called star architects belongs to the past, even if there are always going to be master-minds in architecture with a strong impact on the next generation. The upcoming generation of architects, now and in the future, is aware of the fact that because of the continuously growing complexity of architecture and the built environment, architecture can only be approached successfully through interdisciplinary teamwork. 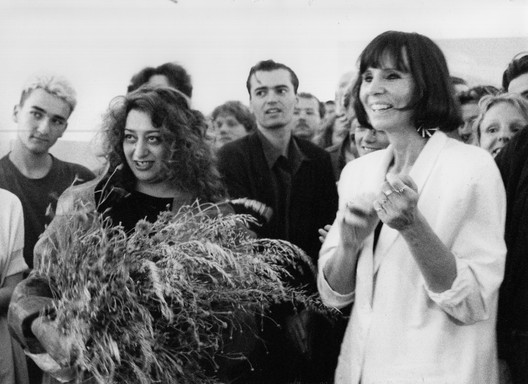