Save
Anastasia Elrouss Designs a Vertical Eco-Village in Beirut, a New Way to Inhabit the Built Environment
Share
Or
Copy

Anastasia Elrouss Architects has imagined the MM Residential Tower, a vertical eco-village in the fast-developing suburbs of Beirut, Lebanon. Labeled Urban Lung, the project, sitting on a 900-square-meter rectangular site, generates 14 stacked floor plates around a central and open planted core. The ground floor and basement level, rented by Warchee NGO, will encompass farming and carpentry workshops for women. 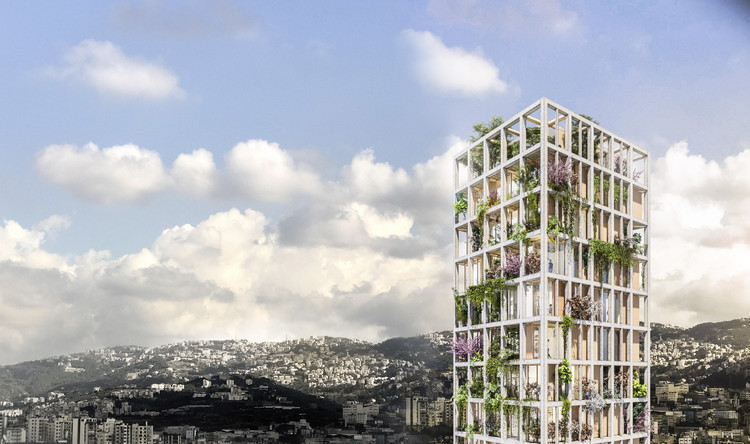 Located at the intersection of two streets in Chyah, a suburb of Beirut, Lebanon, the MM Residential Building is a “vertical green landmark with a unified structure whose multi-layered façades act as a protective translucent shell vis-à-vis the street and the surrounding buildings”. Offering residential solutions, while giving residents a new way to inhabit the urban environment, the project “soars from the ground up as a single structural vertical planted element, extending out of the busy city life”. The pilot project aims to blur the limits between the diverse communities in the large urban context in order to allow more unity between people besides their cultural, political, religious, and economic belonging.

Innovative, the building offers a new way to occupy the space. In fact, a structural concrete façade system introduces flexibility both in plan and in section. Coupled with a secondary recycled wooden modular façade, customized upon the need of the inhabitant’s ways of living and produced and maintained by the working women at Warchee’s workshops, the MM Tower is envisioned as a field condition and not as a box. Different configurations of apartments can be integrated into the volume, giving the possibility for every resident to customize his own living space, with internal wooden partitions. Inspired by the Lebanese extended family culture and the idea of a vertical village, the custom-made housing system does not propose a plan, but instead creates a volume, allowing social and economic vertical diversity.

The proposal shows the interaction between a very dry congested area with a fluid forested vertical environment creating internal privacy for its inhabitants and acting as a sustainable activator for greener links between the street and the roofs. The volume acts as an inclusive green corridor offering programmatic flexibility. -- Anastasia Elrouss Architects

Simple, cost-efficient, adaptive, and contextual, the MM Residential Building “responds to its surrounding while criticizing its neighborhood” with the introduction of vertical ecological gardens. In fact, the 4 façades of the structure hold pocket agricultural gardens and linear planted terraces. These spaces act like buffer zones for the private internal spaces and create a direct interaction with the very congested area of Chyah.

Including a vertical programmatic diversity, the building offers spaces for carpentry, planting and maintenance workshops, cooking classes for women, spaces to sell microgreens, salads and edible flowers, high and low-end residential units, etc. The main vertical staircase, completely open and wrapped with vertical gardens, generates a meeting point for the building’s inhabitants. In addition, this central public structural and circulation core allows the working-women to access the green buffers for maintenance and planting.

Part of the “Ecological Trilogy” project, comprising 2 satellite interventions with the 14-story residential tower as its central element, MM Tower is connected to the other proposals by an electric shuttle. Other projects include a pavilion in the city park, comprising a conference room, exhibition space, and an urban greenhouse. The third and final pole of the trilogy is a full-fledged farm that produces edible flowers and micro-greens. 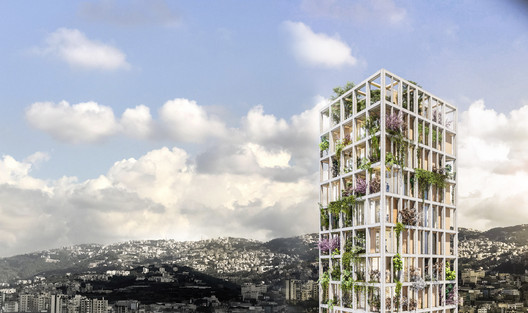