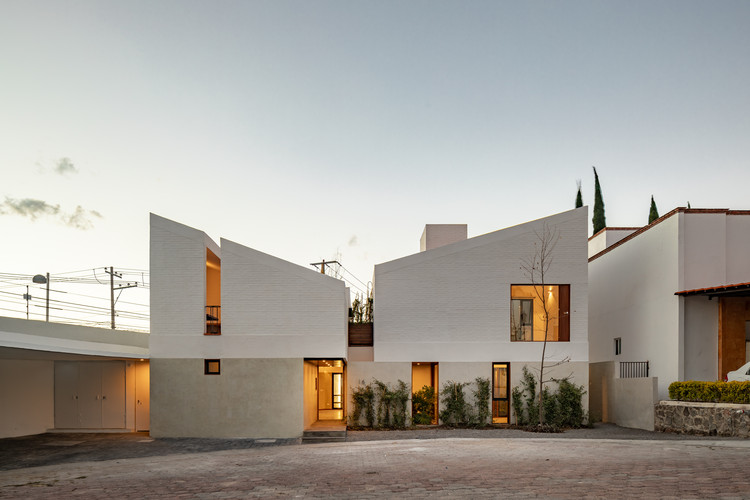 Text description provided by the architects. Located in Juriquilla, north of the city of Querétaro, Casa Rivera is part of one of the private neighbourhoods developed in this area. The complex has specific regulations for the design of its houses. Shapes, materials, heights and languages are aspects that were present and worked on comprehensively throughout the process.

The project was created as a house for rent at the initial request of the client, who became personally more involved with the development of the project and thus decided to keep the property to inhabit it with their family. This allowed us a much more sensitive approach with the client, being able to delve into every detail and space according to their perceptions and needs.

The main idea is to generate routes that allow an appropriation of space, in which one discovers visual touches while travelling through space. From this idea, a set of volumes were born that provide individuality and privacy in each space and in turn rest on a foundation rooted in the ground, which seeks to provide a feeling of protection that reflects the current conception of family life.

The search to separate the spaces in order to give better privacy to each member of the family reinforced two concepts that we constantly seek in our projects, light, and silence. These concepts helped us develop a good ratio between the volumes and the voids of the house, expressing them by using courtyards, balconies, and terraces that optimize air circulation, acoustics, and the entry of natural light into the house.

The materiality of the project was highly studied, since, in addition to being something important for the regulations of the neighbourhood, it also had to clearly reflect our constructive position, in which we always seek to implement organic techniques and traditional methods from each region, to reinforce the atmosphere of the spaces. This is how we decided to use whitewashed walls and earth-based stuccos, fulfilling two of our priorities: naturally sealing the walls, allowing them to breathe through lime and leaving an artisanal imprint of the worker's hand, reminding us of the walls of the old estates in the region. The use of wood corresponds to the feeling of warmth to soften the harshness of the site, giving us an acoustic shelter that reduces reverberation as a result of the search for silence in the house.

The vegetation is a very important part of this project, seeking to frame the visual finishes by generating a constant rhythm of vegetation in all the spaces of the house. This rhythm is made up of silences that are expressed through green moments that accompany the inhabitant throughout their journey.

The lines of the house are perceived as a result of all these concepts. A set of volumes of lime, which in their sloping clay roofs, maintain a constant dialogue with their surroundings and rest on a stucco base. A house that without neglecting the site, the customs, and its surroundings maintains the search for a contemporary response.