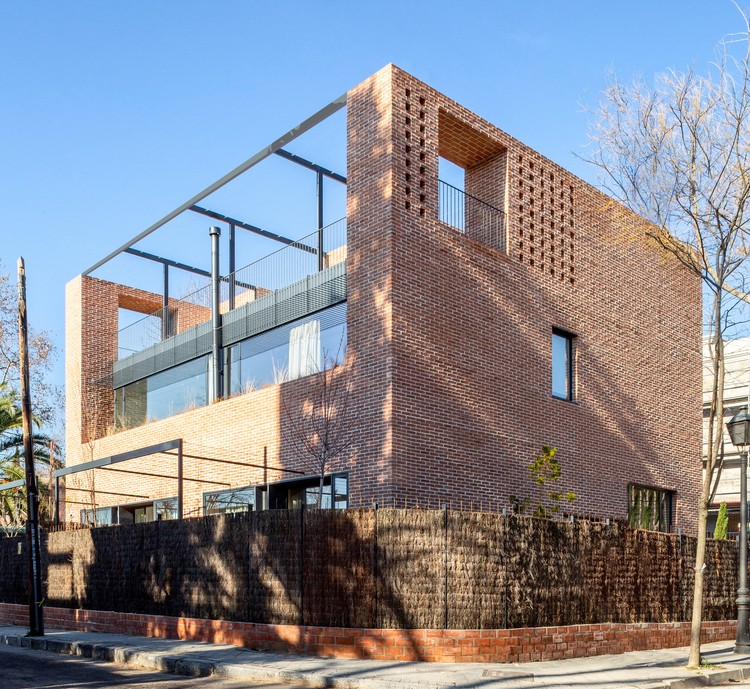 Text description provided by the architects. The assignment consists of projecting two houses for a mother and her son on the plot where her single-family home is currently located, in order to fully exploit the possibilities of the plot and adapt to her new needs.

The mother, a little reluctant to change, wanted her home to be as similar as possible to her lifelong home in terms of distribution, and they both agreed that the facade material was brick and that the vegetation was very present, as a reminder of the other house.

A large brick box designed under bioclimatic criteria. The regulations required collective housing, with shared access and garage. Thus, we propose a two-dwelling building, with a unitary exterior image, a large brick box that hides two semi-detached houses, more or less twins, with large windows to the South, protected by a steel brisolei, punctual holes in the east and west walls and a large window from side to side to take advantage of the north light on the first floor.

On the deck a common terrace delimited by the side walls and with a vegetal pergola to protect it from the sun, occupies practically the entire floor, giving them back the free space they had before in the family garden, with an a small swimming pool and great views over the tree-lined neighborhood.

The houses being very similar, respond to the type of life of each one. The son's is a house of contemporary open spaces. It is accessed through a small hall and from there to a large room where the dining room and kitchen are located, this 3.5m high room, is similar to the one that occupies the living room to the south, and separates the stairs and the toilet, that are located in the center of the plant. On the top floor we find the master bedroom to the south, suite with bathroom and dressing room integrated, very bright, with a window and a gardener that go from side to side. And to the North the space for the children, a single room that can be divided or communicated as needed, with a table, a window and a gardener that also go from side to side. The mother's house, responding to the same scheme, adapted to the furniture, its needs and more classic tastes.

Outside, a large part of the perimeter is occupied by the common ramp down to the garage, and the rest is divided into small private gardens for each house, with a pergola to the South and a series of English courtyards to illuminate and give access to the plant basement.

Structural elements in sight. Inside we decided to leave the different structural elements in sight, as a measure of savings and constructive sincerity. Thus, the roof is the same forged of alveolar plate, the floor will be the polished concrete slab itself, the load-bearing walls of the facade will remain in brick seen painted white and the metal beams will be visible as a compositional element more.

1PS // One pass system. By leaving all the structural elements seen as finishes, we had to think of an alternative construction method that would allow us to put all the installations in the structure phase, underfloor heating, electricity, plumbing, ventilation…We decided to build each floor in one pass, with a previous work of exhaustive definition, we were able to completely finish each floor before starting to build the next one. This system also has allowed us to finish the work in 7 months 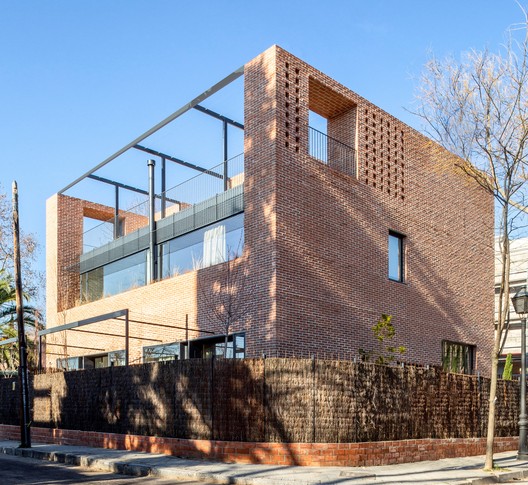