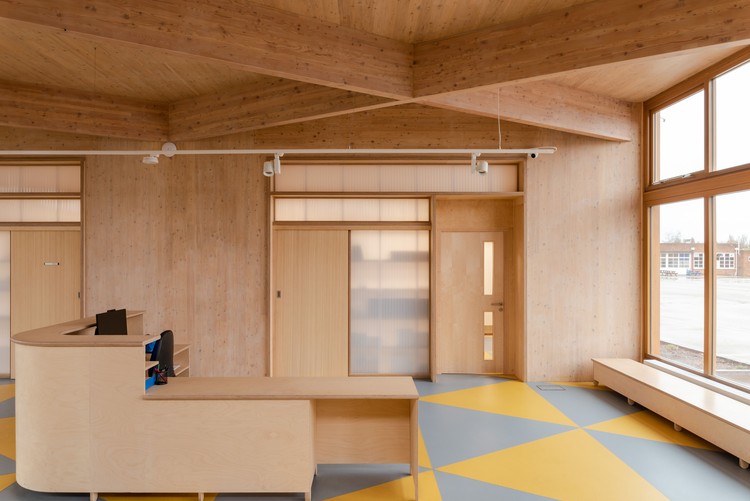 Text description provided by the architects. DK-CM’s project for Wroughton Academy brings together two schools that have shared the same site for many years to form a new combined primary academy. Designed, in part, through a series of workshops with the children themselves, the airy and open space formed by infilling between the two existing schools delivers a scale and generosity of space more often associated with public building such as libraries or museums into the ordinary daily life of a school.

The flexible space is a precise and minimal intervention that has had a transformative impact. Filled with natural light, it can be used simply as a link between infants and juniors school buildings or as a teaching space, auditorium style. Combining the two schools allows pupils to spend the full time of their early years education on the combined campus, creating a new sense of community, as infants and juniors begin to meet and learn together. The warm, fair-faced timber interior is defined by a dramatic diagrid timber structure across the ceiling. The wellbeing benefits of timber construction are harnessed, creating a breathable and comfortable internal climate reducing stress and improving cognitive function - fundamental for the future of learning. CLT and Glulam brought off-site manufacture and speedy assembly on site, minimising disruption to the school which remained operational throughout.

Sustainable, environmentally conscious design is fundamental to the practice’s design process. Our existing built fabric is an immense resource, and the practice is excited by the potential to maximise their performance with minimum impact to our world’s finite resources. This project demonstrates the potential of modern methods of construction, such as CLT, that have been developing fast in recent decades. As well as being a very low carbon method of construction and achieving high levels of energy efficiency, CLT allows prefab construction to be bespoke and project specific, in contrast to the previous modular prefab construction of the mid 20th Century familiar to schools across the country. On the exterior, the link building mediates between the progressive language of the original junior school, which opened in 1950, and the blockier 1990s infants’ counterpart. Inspired by the open air school movement of the early 20th century, of which the existing junior school is a living example, the intervention celebrates the core principles of sun lighting, ample fresh air, spatial generosity, exposure to the outside, and is carefully sited to retain the existing green landscape. 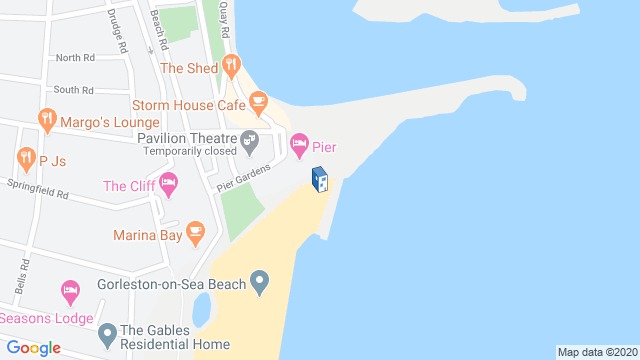 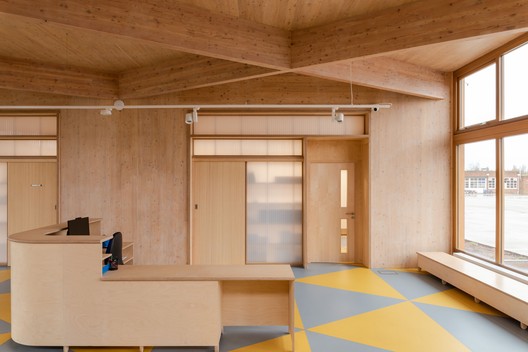