Save
The Flow of Time House / MW archstudio 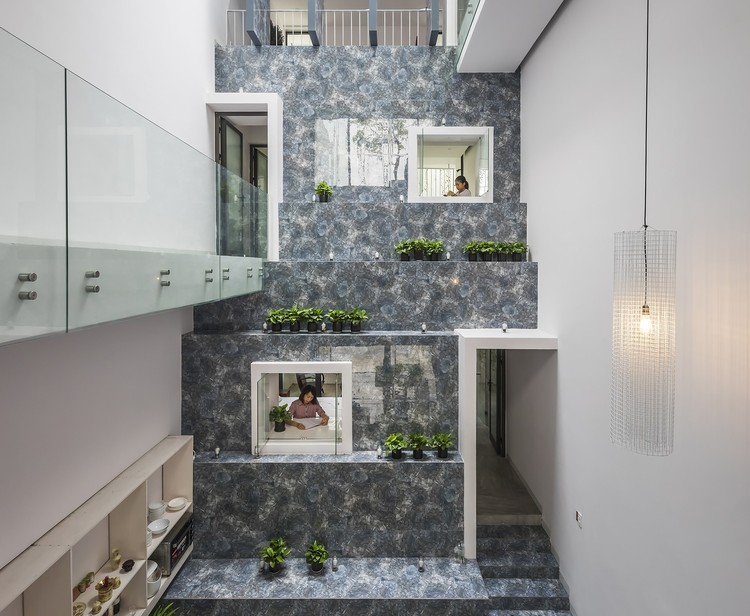 Text description provided by the architects. This townhouse has a land size of 5m x 20m, a common code in the typical Vietnamese housing subdivision planning. The house is south-facing (exposed to the scorching sun and high temperature in the afternoon, in the direction of the sun). It is a family living space of a young couple with two girls.

The house is located in Hue city, a land filled with the famous and typical Vietnamese rich history and culture. The region is located in the cradle of the old feudal culture - the old capital of feudal king reigns throughout history, and at the same time, the religious center of the country. Additionally, Hue has a very special geographic location. The reason is that it is a climate transition area between two regions: the North of Vietnam with the tropical monsoon climate where the winter lasts longer and the South with the tropical monsoon climate where, typically, the temperature is high and the rainy season is different from the dry season. Basically, the architecture is inseparable from the historical context and the local climate.

As a result, the design team came to a solution, which is creating continuous space buffer zones: the buffer zone between inside and outside the house – for solving ventilation problems to avoid thermal shock for users; the buffer zones between different architectural spaces in the house – for creating comfortable feelings for users so that they can continuously and flexibly move through the transition areas. Lighting and ventilation are the issues that the design team specially considered when designing the house. The difficulties arise from the house’s unfavorable direction as mentioned earlier.

Therefore, the buffer zones between the outside and inside of the house must be considered in terms of the ratio of depth and height of the architecture, the designed position of the buffer zone, whether the aluminum glass door system is opened and closed flexibly so that the house can receive the light but the light only comes into the house and stops at certain points. From these points, the direct light from outside will be scattered into indirect light and radiate evenly to the remaining spaces in order that there is sufficient daylight without the need of lamps for all indoor spaces (resolving the disadvantages that the size of the house is long and there are only the front and back of the house exposing the direct sunlight). In addition, layers of green trees are added into these buffer zones to reduce the temperature in the buffer zones.

For this reason, the humanistic factors in the relationship between family members are prioritized – which is consistent with the indigenous culture of Vietnam in general and Hue city in particular. This can help avoid the lack of family cohesion that the majority in Vietnamese society is suffering from - a consequence of modern development in the early days.In the context of the current rapidly developing society, architecture – the typical image reflecting that consequence is not an exception. Development, modernization and the movement towards new things, the future are obvious, however, should be in a positive and civilized approach. The house is designed according to the above-mentioned plan. The lines and shapes are modern, strong but still soft and lissome.

Each architectural line, shape is a memory, a recollection of many generations. The door frames, the gardens bring back the memories of the countryside. The walls which are swept down from the height, extend to the living room, connecting with a small garden (with many native plants), are a memory of waterfalls, the streams. The radiated light on the vertical wall is related to the image of fireflies in the night, or sky lanterns released to the air. The items in the living rooms and other spaces are made based on the traditional style of the Hue people. The shell of the chandelier in the void is inspired by old birdcages. The bedroom spaces for girls and parents, while maintaining good cohesion, still ensure privacy and intimacy – a typically cultural feature of Vietnamese people. As a result,  the house with modern images and functions, but with many flows of memories inside, continues writing the future story – The story about the flow of time. 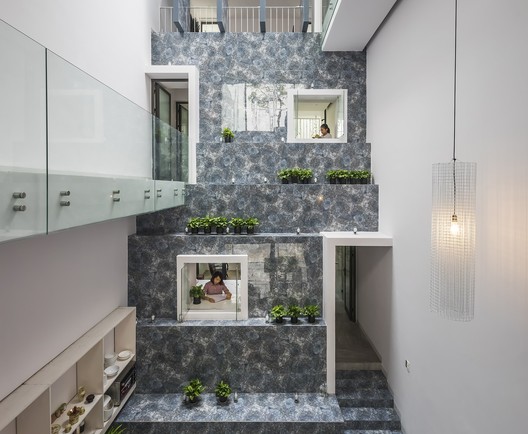