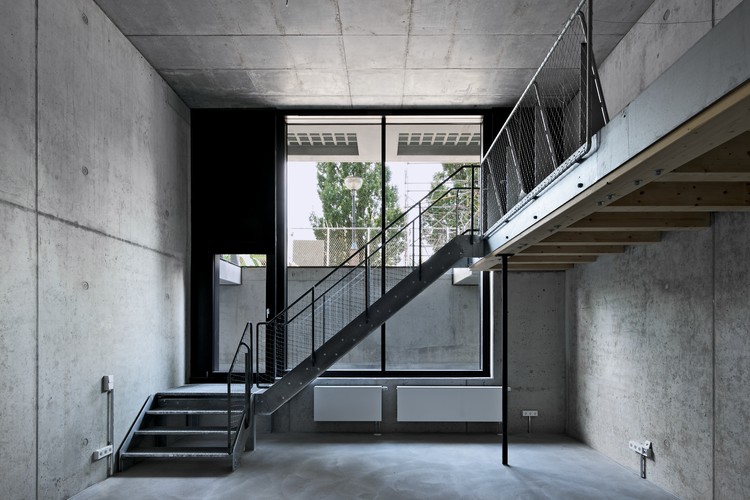 Text description provided by the architects. The former central flower market is situated in the historic Südliche Friedrichstadt in Berlin’s Kreuzberg district. The actual market hall is used by the Academy of the Jewish Museum, which stands across the road. The surrounding areas are characterised by post-war housing and in particular buildings that were constructed for the 1984/87 International Building Exhibition, as well as by a variety of cultural facilities and creative enterprises. Several galleries, a higher education institution for design, changing exhibitions, temporary projects and public art collections stand alongside the publishing house Springer Verlag and the TAZ daily newspaper.

The site’s attractive and central location near Friedrichstrasse suggests that the present mix of uses, which includes inexpensive housing in the neighbourhood, is at risk in the foreseeable future. The intention was to redress this trend, notwithstanding the current need for development, by launching a concept-linked award procedure for the central flower market site. An innovative multi-stage qualification process was developed in collaboration with the Friedrichshain-Kreuzberg local authority, the Berlin Senate Department for Urban Development and the Environment, local stakeholders and independent experts, whose aim was to support the ongoing project and assure the quality of architecture and urban development.

The development objective for the plot south of the hall was to establish a diverse and mixed pattern of use for a wide spectrum of residents. Owner-occupied artists’ studios and apartments, cooperative housing and studios, space provision for social associations, and commerce were part of the programme for the establishment of a new building group and hence lay the foundation for the IBeB. The main idea for the project, which was initiated by the architects ifau and Heide & von Beckerath in cooperation with the Selbstbaugenossenschaft Berlin eG, is to offer a mix of live and work units that meets the needs of artists and creative professionals, among others. Moreover, the comparatively low land price allowed the cross-subsidisation of cooperative residential and studio spaces within the project, which can be let at a sustainable rent.

The building volume exploits the maximum permitted site area stipulated in the binding local development plan. The architectural concept is structured by three connected horizontal access cores as well as by the relation between the building envelope and the interior atriums. These parameters describe and inform the typology of the units and their integration into the neighbourhood at the former flower market. Ground level access is from exterior areas around the building. The entrances to the multi-storey studios, a garden with adjacent communal utility rooms, and a basement face onto paths around the building. Three entrances provide access to two interior staircases. Another access element situated on level 1 is structured and lit by the green atriums. Small south-facing apartments front onto this rue intérieure while the north-facing rooms are linked internally with the units above, which can also be accessed directly via single-run staircases. Access on level 4 is from the exterior. Here too, access is provided on two levels, albeit vertically mirrored.

Additional studios shared space, and a roof terrace, including optional reserve areas on a deck above, are also proposed. All apartments and studios have different sizes, room heights, and standards of fittings. Some of them have been adapted or linked in the design development stage to adjust the spatial concept to the occupiers’ needs. The underlying principle is that units in the centre of the building are arranged in modules over a depth of 23 metres while units at the ends of the building are designed around the cores and establish differentiated interconnections with their surroundings. The apartments and studios on levels 0, 1, and 4 and at the ends of the building have barrier-free accessibility. The structure is a combined cross-wall and column construction. All ground floor spaces are transparent and can be extended into the adjacent public areas. The building envelope combines ceramic elements, windows, and fixed glazing in its facade. Generous balconies are situated in the south and west.

The owners and representatives of the cooperative have jointly developed the project’s social and spatial focus. In view of this, the public and semi-public interfaces with the neighbourhood are given specific attention. The building was designed in such a way that it could be constructed cost-effectively using prefabricated components and largely realised as an Efficiency House 70 (EnEV 2014) with the extensive use of sustainable building materials. The access concepts and floor plans are flexible to accommodate possible conversion and retrofitting as well as adaptation to changing demands. The floor plans for the 66 apartments were designed and detailed in cooperation with the future residents. The 17 studios and three commercial units are conceived as blanks so that the standard of fittings will meet the different needs of the individual occupants. The decision-making process determining the type and position of communal facilities and the development of a binding standard for fittings took place in close collaboration with the building group. 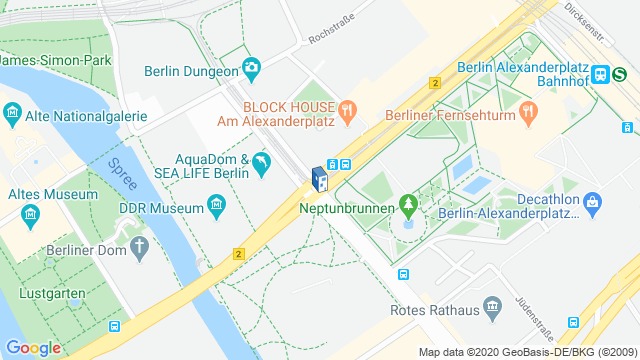 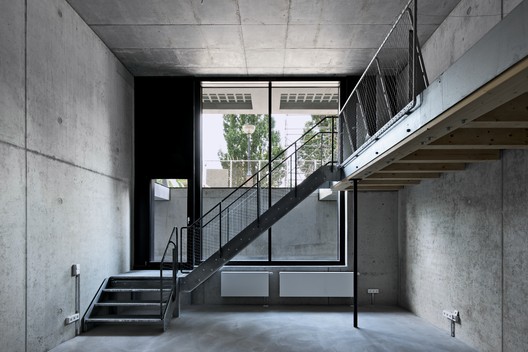 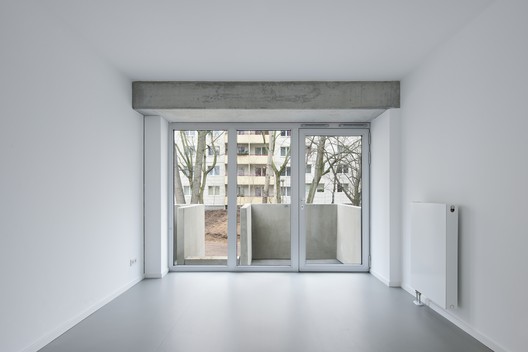