Paul Philippe Cret’s 1937 building for the Federal Reserve Board (FRB)—the Marriner S. Eccles Building—stands as a prime example of neoclassical civic architecture along Washington D.C.’s Constitution Avenue. But the white marble building may have prompted new proposed guidelines around federal architecture, if conversations swirling in meetings of the Commission of Fine Arts are any indication. Plans to renovate and expand the FRB complex—the Eccles Building is joined by the FRB-East Building, designed in 1933 as the US Public Health Service by Cret’s fellow Frenchman Jules Henri de Sibour—are currently under review at the National Capital Planning Commission (NCPC) and the Commission of Fine Arts (CFA).

In what might become a proving ground for the draft executive order mandating neoclassicism as a federal architectural style, the proposed updates by Fortus, a joint venture between CallisonRTKL and Quinn Evans Architects, have been met with varied receptions at consecutive CFA reviews. After an initial cordial response, things soured following the late 2019 presidential appointment of two additional CFA commissioners, James McCrery and Duncan Stroik (another, Justin Shubow, was appointed in 2018), both of whom took the occasion of their inaugural meeting on January 16, 2020, to voice classicist concerns in their first encounter with the project.

The $42-million FRB refresh had been on the CFA docket on November 21, 2019, with commissioners largely approving of the three preliminary renovation and expansion proposals set before them and encouraging the design team to continue to explore massing as well as ways of reducing overall parking. In that meeting, plans for new glass infill on the open east and west elevations of the Eccles Building, with skylights transforming open courtyards to enclosed atria, seemed poised for approval; so, too, did the modern addition proposed along the northern edge of the FRB-East Building. But in the January meeting, having further developed the favored proposal, members of the Fortus team seemed taken aback by the new critical voices coming from the CFA.

Of the two, Stroik was the more vociferously opposed, previewing language in the nearly contemporaneous draft executive order in calling for the civic character of the Eccles building to be preserved. According to minutes of that meeting, Mr. Stroik “questioned the assumption that the additions need to reflect this new interior environment on their exteriors,” and asked if this were “a more important consideration than respecting the aesthetic of our society’s civic architecture.”

Stroik went as far as to propose a motion that the designers redraft the scheme, substituting the proposed glass for white marble, in order to better camouflage the contemporary structures and “to express a civic architecture using this material.” Most of the CFA body, however, seemed to agree with commissioner Toni Griffin—founder of New York-based practice Urban Planning for the American City—who suggested that “the task of the design team is to create a civic architecture with whatever materials they choose—whether stone, steel, or glass.” On that point, the architects’ updated proposal incorporates all three—White Georgia marble, treated glazing, bronze, and other metals. Representatives from CallisonRTKL, Quinn Evans Architects, and the CFA did not return requests for comment, but the CFA’s meeting minutes are public record.

Stroik’s motion garnered the support of fellow classicists McCrery and Shubow, but did not pass. As of its May meeting, the CFA seems to be split along aesthetic lines, with the majority supporting a material distinction between original and addition, while the minority clamors for more marble, citing glass as “an unacceptable contrast to the solid masonry architecture of the historic building in its monumental context.” How the civic architecture debate will evolve remains to be seen, as the terms of several CFA members draw to a close this year.

[Editor’s note: The representative for Quinn Evans Architects who presented the project to CFA, Tom Jester, serves as the chair of the board of Docomomo DC, on which the author also sits. Jester did not provide comment for this article.] 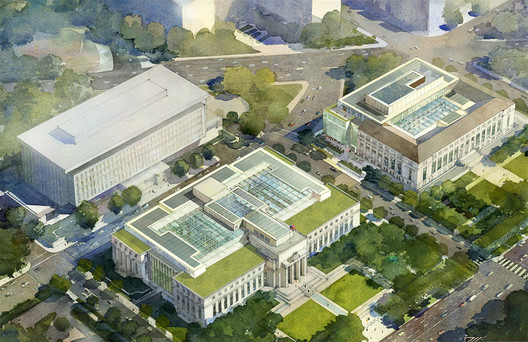