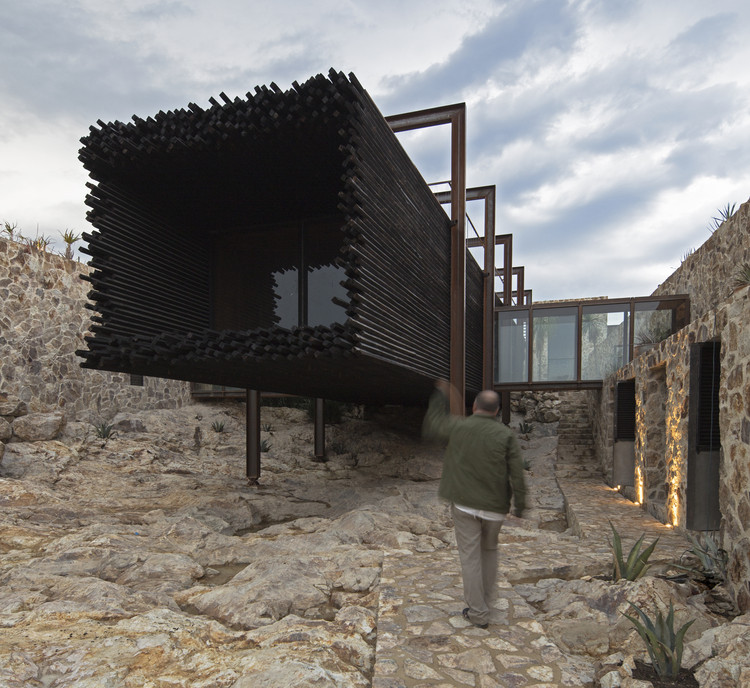 Text description provided by the architects. The house was conceived as the search for a new way of life, far from urban life, appraising the River Plate riverside landscape. The requirement transcended the basic need to live, forced an existential reflection and assumed an experimental dimension of the project. The tools adopted to tackle it were the most essential of the discipline: the eloquence of space, the austerity of resources, material plasticity, light management, synthesis and abstraction. The site imposes an urban route before the access that allows the coexistence of two rotated geometric logics to be recorded: the plot of the blockage, parallel to the river coast and the diagonal cut of the route that gives us entry. The perception of the architectural object is markedly dynamic, always foreshortened, avoiding the frontality. The house with its four free faces can be seen from multiple points of view, even from public space.

The “cube”, strongly conditioned by the mandatory withdrawals, is actually a square-shaped prism of 9.40m x 9.40m and 6.60m in height, and it is located behind the lot in order to optimize the sunlight. The abstract prism houses both the interior spaces and the expansion semi-covered one. The organization of openings that pierce the outer enclosure, do not allow us to foresee the spatial complexity that awaits us when entering. The entire space is organized from a new orthogonal system rotated with respect to the enclosure. It was avoided to consolidate the center of the square, which would subdivide the space into four equal parts, and "anchor" both geometries to each other. On the contrary, the central support of the mezzanine is hung so that the ground floor is a unique space. The will to free the ground floor from intermediate supports resulted in a provocative structural challenge. The mezzanine hangs by means of a central tensioner, from the roof slab. The roof has two different levels and houses a 24 x 80 cm beam in its break that transfers the load to the enclosure.

In contrast to the spatial complexity, the house was conceived as a monomaterial piece of exposed concrete that exposes its faces in a plastic way, both inside and outside. For this, a constructive system was developed that allowed the insulation to be included within the concrete mass. The wrapping wall is made up of three 8cm layers of concrete-EPS (expanded polystyrene) -concrete, cast simultaneously. The lightened enclosure in its core comfortably supports its structural role despite the concentration of efforts involved in solving the angles. The definition of the object does not require detail or termination, it is intrinsically the structure. The concrete prism thus synthesizes the spatial, material, structural, and technological challenges. It hides a rich interior space whose geometries refer to the intersections of frames that characterize its urban insertion.