Save
Design Tools: A Critical Look at Computer-aided Visualization and Hand Sketch for Architectural Drawings
Presented by

As the foundation of any architectural design, sketches and drawings have long been known for their ability to allow the architect to interact with his/her design efficiently and express concepts intuitively. While the importance of hand drawing is understood broadly in architectural schools, what happens to those who is incapable of hand drawing? Numerous students have found it extremely difficult to cope with the intensity of hand drawing exercise during their first year in architectural training. Among these students, some would choose to quit architecture simply because they cannot draw well, some would decide to focus more on learning the techniques of computer-generalized design drawings.

Consequently, these two types of design drawings produced by hand and machine, are becoming two distinctive presentation styles, and arising heated debates around both academic and professional world. This article will take a critical look at the application of computer-aided visualization and hand sketch in design drawings, and analyze the pros and cons respectively.

Plastic Production Versus Spontaneous Modification
When one starts designing, he/she would most likely to come up with conceptual drawings first, which can be a set of referential sketches, a visual diary or a random record of the architect’s inspiration. Because at this stage, one only needs to express design concept without concerning many details, these sketches can be simply fragmentary and spontaneous, drawn on sheets of tracing papers, ready to be layered on top of each other. This can be seen as an evolving process that one must go through when initiating a design proposal.

For instance, when a design project is assigned in architectural schools, students would generally conduct site analysis by hand tracing the property boundaries, zoning, planting, arterial roads and existing adjacent building, and layering them on top of each other to see how they converge or diverge and where the design opportunities lie. Hand drawing can be as a preparatory process that allows the designer to gain a sense of scale and familiarity with the site condition, while laying things out on a grid.

Nevertheless, the traditional design process as we discussed above is challenged with the introduction of powerful computer visualization. Nowadays, when students are given projects, it is becoming more likely that they would directly grab the satellite image of the site from Google Earth, then rotate and scale it in software like AutoCAD or Rhino as required. This process of rotating and scaling can be done by simply entering a value or a command, making it purely machine-made with a lack of intuitive thinking.

As computer-aided programs are embraced for its unmistakable precision, architects could then go ahead and 3D-model the entire site based on the linework they traced digitally, they can zoom in and out and cut sections wherever they want. Moreover, the computer-generated images make it much easier to sell to the real estate market. For those clients who are not comfortable reading the plans and sections, they are welcomed to walk around the site virtually and understand the design rapidly. Digitally rendered design makes it accepted by a wider public, because everyone can read the realistically rendered drawing rather than messy hand sketches.

As a designer or architect, we should be cautious when designing or presenting with digital visualization, for it often makes design plastic and duplicable and presents misleading reality. If you rely too heavily on computer at conceptual design stage, your design is more likely to look like a collage of all the elements you collected from other precedents. Without in-depth intuitive thinking, you will be closer to the production mode rather than design process. While browsing online, it is not rare to see the ready-made design blocks in CAD or 3D furniture warehouse, which you can easily insert into your project, however, you should always question the originality of design, is ready-made, mass-produced elements really counted as design? Or they are simply a duplicate of other designs without sufficient consideration of site condition.

Furthermore, without going to site in person and sketch out the design by hand, it’s nearly impossible for one to really perceive the light, humidity and shadows, the distinctive elements of the built environment. Computer-generated imagery is ideal for selling to a targeted group of audience such as banks and developers, as it tends to illustrate the design in a perfect bright and clean condition. The digital renderings are often quite promising with balanced composition and carefully planned sunlight angles and shadows, all aimed at a best result, which can be misleading when compared with real-life post-construction condition. With the varied environmental factors such as weather, people, and dust, not all materials we see in the renders look like what they are in real life. Ironically, it becomes controversial that whether or not the “realistic rendering” really presents us with reality.

Hybrid Approach
“Hybrid approach”, is a new term that the architects have suggested when it comes to the decision between hand sketches and computer visualization. According to a 2014 survey of ASLA’s Professional Practice Networks (PPNs), members were asked how they prefer to work: on a computer or sketching ideas out by hand. About 23% chose a “hybrid approach”, which uses the “computer for efficiency” and the “hand for creativity,” as one respondent argued.

“Hybrid approach”, can be seen as both a combination of tradition and technology, and a compromise under increasing takeover of digital design tool in today’s world. It is suggested that, architects should still preserve the traditional hand sketches as part of the design iteration at schematic design stage, since hand sketches will allow room for idea stimulation and spontaneous modification. When later comes the finalized conceptual design, computer-aided programs can be more convenient and efficient, as it generates myriad design proposals based on given parameters. However, we should keep in mind that the built environment is not static but full of dynamics, all parameters is subject to changes throughout time.

For a young architect, one needs to be aware that drawing is essential in architectural training as it expresses the interaction of the architect’s mind, hands and eyes. It is very important to draw to conceptualize architecture, instead of relying simply on the computer to do the job for you, as the entire experience then becomes impersonal, indirect, somehow, futile. 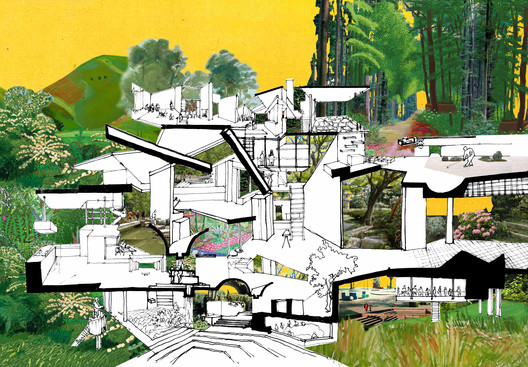