Herzog & de Meuron have created a new design for a supertall skyscraper in Toronto. If built as planned, the project would rise to 1,063 feet and become the tallest residential building in Canada. Working together with project architect Quadrangle, the team was commissioned by Dutch real estate development companies Kroonenberg Geoep and ProWinko to design the new landmark for Toronto.

The supertall tower is sited at the northwest corner of Bloor and Bay Streets in the Yorkville neighborhood. Kroonenberg Geoep and ProWinko purchased the parcel at 1200 Bay Street in 2016 for $86.75 million. The proposed building would aim to maximize usable floor area and to capitalize on eastern views.

For the program, the tower would include sixteen floors dedicated to offices and retail space, with 64 floors featuring a range of different sized condominium units. Private amenities would separate the lower levels from the upper condominiums. At the top, a sky lounge and restaurant will look out over the city. 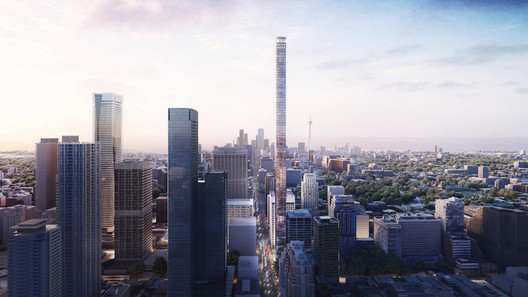