Save
Edgar Jerins: Photographing the Locked-Down City of New York
Share
Or
Copy

New York City: locked down, empty. It was heartbreaking, of course, but it was also beautiful. For artist Edgar Jerins, that revelation was something of a surprise. Who knew this bustling, chaotic, dirty, vibrant, profane, amazing city could look so … gorgeous when stripped of people and activity? For years, Jerins rode the subway to his studio near Times Square. When news of the spreading pandemic first surfaced—more as a vague, undefined threat, initially—he fled out of fear to the bus, and then, after the severity of the event became apparent and the lockdown began, he borrowed his daughter’s bicycle.

Jerins didn’t set out to create a visual record of the event; he’s a painter who has used photography as a reference tool for his entire career—but he quickly realized that might be exactly what he was doing. His first image, taken with his cellphone, as all of his photos are, captured an eerie Times Square, lights blazing, “The Crossroads of the World” now an empty, urban soundstage. “I’m riding my bike home, right at 42nd Street,” Jerins says. “I’m looking at hundreds of taxi cabs, all of them with their lights on, with no one to pick up. I just took a photo.”

Early on Jerins decided, perhaps for the sake of his own sanity, that he needed to creatively respond to the event, and so the digital photo—often taken quickly from the vantage point of a bicycle—became his principal means of expression. As a sort of civic gesture, he documented the landmarks first (Radio City, Carnegie Hall, Apollo Theater), precisely because they were so familiar, but were now cast in an entirely different set of light conditions and backdrops. “After a while, certain things begin to reveal themselves,” he says. “I’m almost like a landscape painter photographing the city. Street lights as they go on are different from the setting sun, and that opens up a new area to explore.”

Every day at about the same time—between 5 p.m. and 6 p.m.—Jerins ventures out on his daughter’s bike. He’s covered pretty much all of Manhattan, from Battery Park to the George Washington Bridge. In stark contrast to his paintings, which can take a year to complete, most of Jerins’ lockdown photos are quick impressions, snapped before the light, the traffic, or the proximity to other people changes. Occasionally, a gem presents itself (moist cobblestones on a SoHo Street at dusk) and he’ll take a series. “Some of it,” he concedes, “is luck.”

Even though he is photographing a city on its knees, documenting an urban tragedy of unprecedented proportions, the images remain formally beautiful. As it turns out, Manhattan at complete rest is a physical marvel: grand, beautiful, haunted, vulnerable, even without the animating force of its irrepressible inhabitants. There is inherent tension in that paradox, which is certainly not lost on the artist. “It was very, very emotional in the beginning,” he says. “But I made a decision that this was how I would respond. At the same time, I wasn’t going to abandon any of my creative strengths: composition, light, color, an emotional response to each image. I just wanted to take all of my skill sets, and try to apply them to these photographs.”

Already, Manhattan is thawing slowly into a new reality. Restrictions have eased. There are signs of renewal (or reckless restlessness, depending on which expert you talk to). The parks are crowded (maybe too crowded). The bars are spilling out into the sidewalks with young people. All of this pent-up need for interaction may be inevitable: We visit New York, we live there, we work there to be around other people, even in solitude, as once E.B. White pointed out. It is the city’s reason for being. And yet getting to whatever lies on the other side of “normal” is likely to be a gradual process, susceptible to setbacks. Jerins plans to document all of it. Once we’ve moved past the crisis, the resulting photos will make for a remarkable historic record (and are perfect for a book and exhibition). More important, it will be a dramatic visual statement of where we were, and what we overcame. 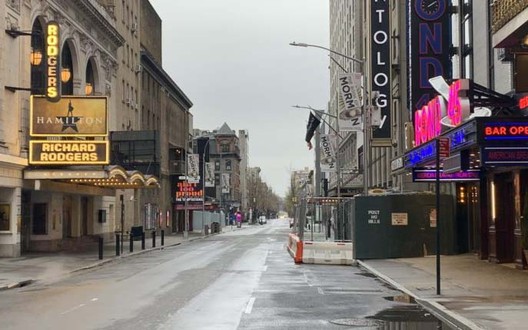