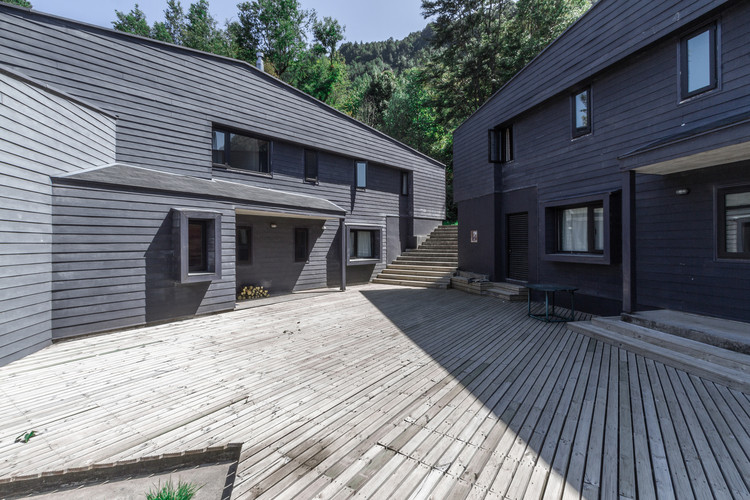 Text description provided by the architects. The commission was to design two identical houses for two families in a narrow site on a gentle slope on a lake shore.

Two important problems arise that are proposed to be solved: on one hand, how to manage the few linear meters of views equally for both houses, and on the other hand, how to maintain the independence of both houses while enhancing the relationship between them.

Two types of priority views were recognized: the one facing the lake, and the view between trees on the farthest shore, which determined two directions within the site. Taking these views / directions into account, we decided to prioritize as the places that those views should have, the living rooms of both houses and the main bedrooms.

Under this criterion, the houses are arranged as a set of two angles that are mirrored, alternating the views and orientations between the units: the living room of one will have a view similar to the main bedroom of the other.

The space between houses is designed as a wooden plaza / terrace that is protected from the wind and frames the view of the lake and is the meeting place between the two families. The houses are accessed from this place, and the interior circulations are arranged facing this place, while the most private rooms are all facing the outside, in order to maintain the privacy of each unit.

SIP panels were chosen as the construction system, due to their good thermal insulation, and care was taken to incorporate elements of the architecture of southern Chile, such as the chiflonera (the place where people prepare to go outside) , and instead of making eaves as a roof finish, frames are built in the openings of windows, to keep rain away from the windows.

The houses consider solar panels for the generation of electricity in the design, because they are in a place where the layout of the electrical network does not reach, so the roof angles consider the inclination to facilitate the accumulation of energy.