Save
This 125-year-old Swedish Town Has Relocated, Buildings and All
Share
Or
Copy

Kiruna Forever, an exhibition at ArkDes, traces the town's relocation due to geological instability.

“Kiruna is on the move,” says Carlos Mínguez Carrasco, curator of the new exhibition Kiruna Forever. Kiruna, a 125-year-old Swedish town that sprouted around the iron mine of the same name, started an official relocation process in 2018 after decades of discussion with the state-owned mining company LKAB. Today, as the expansion of the mine destabilizes the ground surrounding it, nearby buildings are being demolished or loaded onto flatbed trucks and moved to the new city center nearly two miles east.

Despite Kiruna’s remote location (the northernmost town in Sweden, it lies in the Arctic Circle), the value of iron on the global market defines the town’s choreographed retreat eastward. As the price of iron goes up, the speed of extraction increases. And as the mine removes the equivalent of a 12-story building of material from the ground each day, the city sinks at a rate of two inches each year.

Kiruna’s beloved city hall cracked under this pressure. A chunk of the stunning (now demolished) wood-and-brick building was relocated to the warm halls of ArkDes, Sweden’s national architecture museum in Stockholm, for Carrasco’s exhibition, which runs through the end of 2020. Visitors stand behind the hall’s podium and, in a brilliant moment of curatorial anachronism, come face-to-face with a contemporary video work by Ingela Johansson, which remixes archival footage taken at the same location during the 1969–70 miners’ strikes.

Surveying the scene and the screen, one understands that this symbolic building, which townspeople called the “living room of Kiruna,” was sacrificed, says Carrasco, “in order to keep on mining.”

But demolition and subsidence are just some of the ways the land is moving. Global Kiruna, an exhibited research and photo project by Iwan Baan, Anne Dessing, and Michiel van Iersel, “follows the iron.” Tracing ore from the mine along transportation routes and to buildings around the world, the project sheds light on opaque global material flows and reveals the reach of Arctic iron. At a time when short-form reigns, Kiruna Forever offers a refreshing counterpoint: a long engagement with complexity. 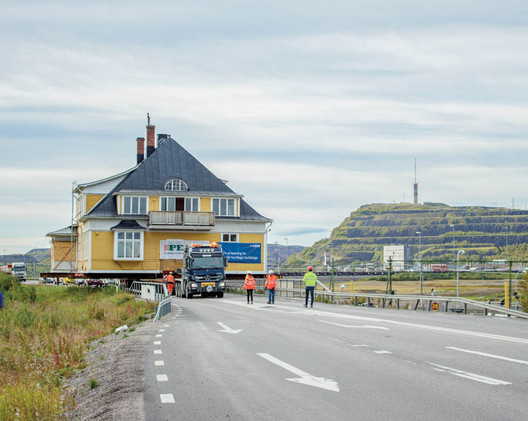