Save
The White Tower House / Dosarchitects 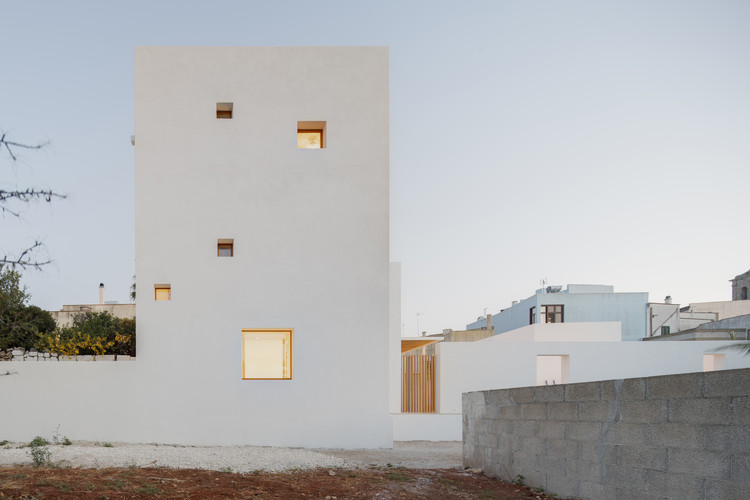 The White Tower house is located in Gagliano del Capo, a quiet village in the heart of Salento, the southernmost region of Apulia that stretches at the “heel of Italian boot” in south-eastern Italy. Aiming to escape the hustle and bustle of their London city life, their vision was to create a haven of tranquillity for their family in a place they most love: Salento. Having spent years searching for the ideal place, Lorenzo and Allegra discovered a small plot of land in Gagliano del Capo, a small white town minutes away from the Adriatic coast.

The house is located within a dense urban context in the proximity of the historic town centre and along a footpath, named Ciolo, that links Gagliano to the sea. From inception, the design of the house sought to establish a dialogue with the existing urban fabric. The design of the house reflects the relationship between the openness of the pedestrian streetscape and the privacy of the daily family life.

The fabric, while occupying all the available area (780 sqm footprint), establishes a balanced equilibrium between the interior spaces and the exterior patio. Following the tradition of the Roman domus, the aggregated volumes of the house overlook an internal courtyard. The interplay of solids and voids also produces a network of smaller patios that intimately connected single rooms to the exterior.

The central courtyard, however, is the real heart of the house, a place of conviviality and play, where the swimming pool and the carefully selected vegetation reproduce the presence of natural elements. Overlooking the patio, a 12m high tower where all the main bedrooms are located. The tower is in line with the bell tower of the church of San Rocco and, while hosting all the bedrooms, it offers suggestive visual access to the sea. This element is reminiscent of the Norman watchtowers, a typical and fascinating element of the coastal landscape of Salento.

The spaces surrounding the patio are connected to the exterior through large double-glazed sliding windows establishing a continuous flow of the interior into the exterior and, vice versa, rendering the exterior as part of the most intimate rooms of the house. The threshold between interior and exterior is marked by the presence of an external canopy made of galvanized iron and covered with bamboo, that connects all the volumes of the house in a single architectural element.

The architecture of the house is deliberately austere to allow the natural elements to naturally fill the space. The interplay of light and shadow onto the white surfaces of the volumes produces an ever-changing backdrop to the life inside the house.

Each and every element of the house contribute to its cohesive architectural synthesis: the volumes, the canopy, the planters, and the interior furnishings embedded in the masonry, the pool, and the fireplace dialogue with each other creating a unique architectural block. This playful exchange between the natural elements and the architecture, the inside and the outside enhance the spiritual well-being of the inhabitants.