Save
Rothko Chapel Set to Reopen this September
Share
Or
Copy

The Rothko Chapel in Houston is set to reopen this September. As one of the world’s most celebrated sacred spaces, the chapel recently underwent restoration as part of the first phase of Opening Spaces, a $30-million master plan for its campus. The work is being completed to more closely align the building with the original vision of the Chapel’s founders Mark Rothko and John and Dominique de Menil.

The overall project aims to enhance the visitor experience in the Chapel and on its grounds, while the expanded campus provides visitors new experiences, programs and more educational offerings. While the opening weekend schedule is still being finalized, it will include a donor’s preview on  Saturday with the public opening and celebration on Sunday – public health advisories permitting.

The Chapel was originally scheduled to reopen in June; the new date in September reflects the Chapel’s desire to gather everyone together in the fall, assuming it is safe to do so. While the official reopening celebration is in September, there will be a “soft opening” once construction is completed, in early July. The Chapel made the decision to open over the summer on a limited basis with timed ticketing and socially distant attendance, to make the place of solace available to the public during a difficult time.

The Opening Spaces plan was designed and led by New York-based firm, Architecture Research Office, which is overseeing both the restoration of the Chapel – with lighting design firm George Sexton Associates – and the expansion of the campus. The redesigned landscape, by Nelson Byrd Woltz Landscape Architects, increases the amount of green space for visitors to enjoy, while reducing susceptibility to flooding and other weather events. Additional construction during the second phase of Opening Spaces includes the development of an Administration and Archives Building, a relocated and renovated Guest House, a Meditation Garden, and a Program Center with outdoor plaza. 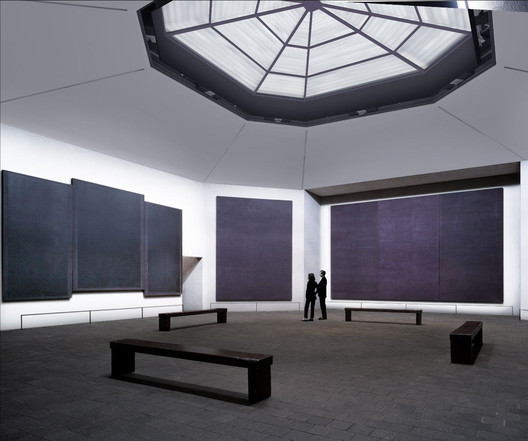