Save
House With 3 Shed Roofs / 416 Architects 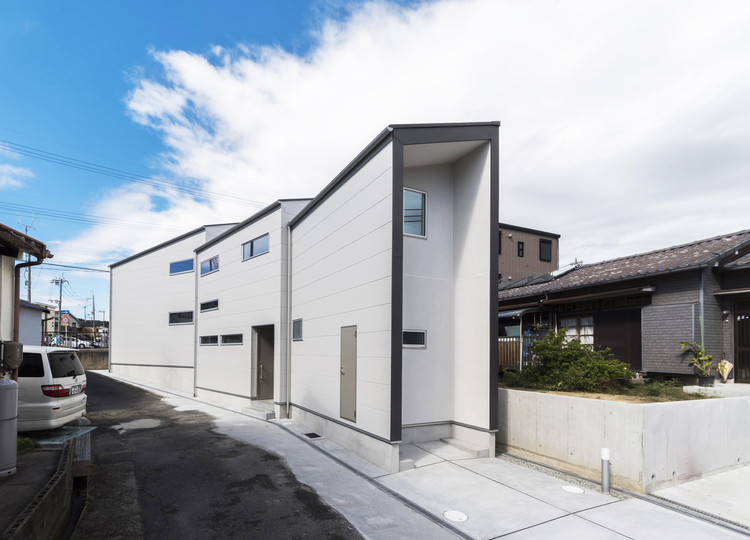 Text description provided by the architects. The house is located in a busy, built-up area, on an awkwardly-shaped site with variations in elevation. It is home to a couple and their two children. Rather than divide up the rooms and spaces with walls and fittings, we separated the different areas using portal frames, which form the structure, and the height differences produced inside the building. It became the kind of house where your view of the different spaces varies, as if you are walking down an alleyway, and you catch glimpses through small gaps of the rooms on the other side.

Roof in tune with the terrain. This area is connected to the mountains that spread between the north of Osaka and the south of Kyoto, and the terrain slopes from north to south. It was decided that the roof of each volume would be in keeping with that terrain, sloping one way in the shorter direction so as to blend into the cityscape. The resulting shape of the completed building gives a sense of rhythm not only to the facade but also to the internal space. Structure creates the internal space. In order to overcome the weakness of an elongated building that is weak in the direction of the shorter side, we attached structural plywood to pairs of pillars 600mm or more apart to make short walls and connected these with crossbeams to create portal frames.

By arranging these portal frames in the direction of the longer side following the profile of the site, we built a strong structure while also dividing up the space so that the appearance of the rooms changes as you move through the building. On the 2nd floor in particular, the private space continues through the three family bedrooms, the workspace, etc. With this configuration, you can see from one end of the inside of the building along its 20m length to the opposite end. It is an arrangement that gives a sense of space to a site with a narrow frontage.

Living/dining/kitchen. It was arranged on the wider west side of the site. A large 4400mm × 800mm table can be used in a variety of ways, serving as a dining table, a meal preparation surface, a drawing space for the children, and a table for a large number of guests, making it the centerpiece of the family. Stairs and solarium. The strip staircase is at the center of the building and connects the volumes at different floor levels. A large three-panel, 2700mm-tall, translucent sliding door is used at the boundary with the adjacent solarium so as to bring in light. 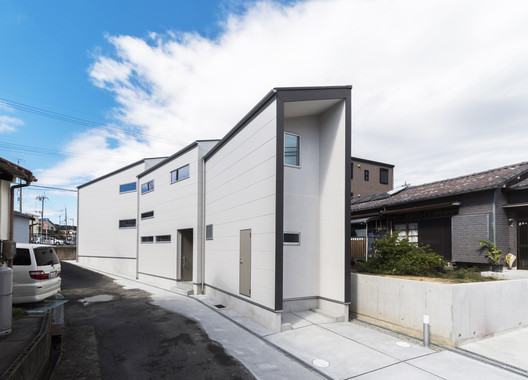