The OMA-Designed CMG Qianhai Global Trade Center has broken ground in Shenzhen. Unveiled during the inauguration ceremony for Qianhai Significant Projects in China, the mixed-used 360,000 square-meter development will create a Micro-City environment, blurring traditional boundaries between building and city.

OMA / Chris van Duijn revealed their latest project for China, the design of CMG Qianhai Global Trade Center. Conceived as a compressed urban environment, challenging the conventional urban separations, the project, once completed, “will at once be a tower, a cluster, a neighborhood, and a city”.

Located in Qianhai, a new and rapidly expanding central business district in Shenzhen, the mixed-used development is scheduled for completion in 2024. Positioned on the intersection of two main roads, three metro lines, and a bus terminal, the building complex will be a Transit Oriented project.

In line with Qianhai’s urban ambition, OMA designed a building, completely integrated into its urban context. Comprised of “a collection of slender volumes, cascading down from the center and forming two main towers” connected by a sky bridge, and a hovering cube-shaped building, the project opens up to the Qianhai Bay, the Nanshan Mountains, and its immediate urban surroundings.

The lower volumes of the main towers will respond to the urban scale of its immediate surroundings including the Silk Road Corridor, a major public park in the area. A cube-shaped building will hover above the podium to form a visual connection between the building complex and the Silk Road Corridor. Roof terraces resulting from the cascading form will function as extensions of the public park. -- OMA

Binding all public and private programs together, with a three-dimensional trajectory, the tower puts in place a public cultural platform and a viewing deck. Moreover, “the sky bridge’s flexibility will enable it to accommodate gardens, art installations, or events”. 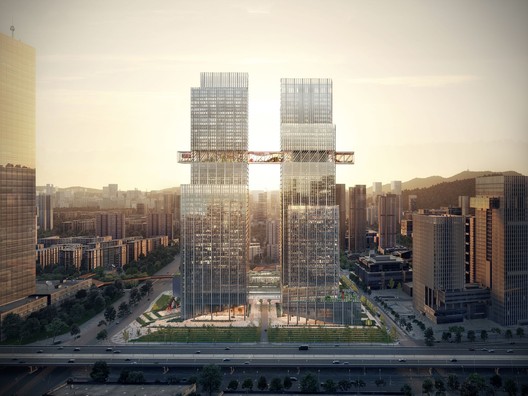