Foster + Partners first built project in Russia is set to be completed later this year, as construction work for the RMK headquarters in Yekaterinburg nears finalization. The 15-storey building designed for the leading copper producer rethinks the conventional office space, bringing about a domestic scale to the interior layout.

The project abandons conventional, large, open-plan workspace and re-shapes the work environment around a modular system tailored to the client’s needs. The building is split into two-storey modules, each containing two levels of office spaces. The modular units are arranged on either side of a central double-height hallway, which functions as a lounge area.

The facade features triangular panels of bronze-colored steel, each spanning the height of an interior module. As the design team states, “the triangulated form draws inspiration from the chemical structure of copper, and the crown of the building integrates RMK’s new logo – a rebranding which has, in turn, been inspired by the architecture”. The alternating opaque and glazed areas are a response to Yekaterinburg’s climate, with significant temperature variations between seasons.

The headquarters’ adjacency to a public park determined the design decision to extend the green area on the site, creating a private garden for the office’s staff. The landscaping echoes the internal office layout through a series of “external rooms”. 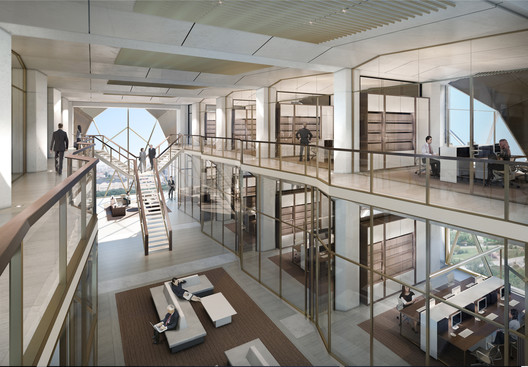