Text description provided by the architects. Promoting higher density / micro multifamily living seems like an oxymoron at this juncture, but this new housing complex does something others typically don’t. It has been scientifically proven that good health is linked to our connection to the outside, and this project brings nature into the interior of each residential unit. This is an example that being connected to the outdoors doesn’t need to be compromised by high density / micro-housing living.

White Stone Flats brings timeless modern design to historic downtown Phoenix, Arizona An undersized infill lot with difficult setback and zoning requirements defies all odds. Situated in the Triangle Neighborhood of downtown Phoenix, Arizona, this modern two-story development is challenging every aspect of contemporary downtown living. With White Stone Flats, architectural principal Benjamin Hall of Benjamin Hall Design designed and constructed, an eye-catching project on a dirt infill lot that the city had little hope for. The project demonstrates the potential of urban renewal through thoughtful design and creates a tranquil space right in the heart of a bustling downtown. The ideas behind White Stones Flats were curated by Benjamin Hall over a long period of time. The root idea of finding solace and refuge in a busy city developed through the process of distilling the natural elements of sky, sound, touch, and sunlight. Instead of focusing its attention outwards and beyond like most projects concerned about appearance in a city, the Flats reverses its attention inwards and focuses on the small details and simple gestures of living, that we often overlook in our daily lives.

The act of opening a door, turning on the water, and simply lying in bed and looking at the stars is made intentional through details. The ideas Hall first started exploring came from design projects early in his studies at The University of Arizona, and subsequently the Danish International School. Hall has built on this foundation throughout his career, adding inspiration from experiences living in Copenhagen and traveling to Mexico City. The main objective of White Stone Flats was to capture the functions of the typical home in an intentional, fundamentally smaller space. This micro multifamily housing complex hosts four identical units with a 730 square-foot footprint each. Identical floor plans provide each resident with a private outdoor atrium. Each interior space captures natural light from this atrium and the downstairs shower cab be opened up to shower in this private garden space. White Stone Flats setting is a comfortable, two-person home that targets the demand for modern, architectural, and high-quality urban living. The design itself is conscious of the City's desire for increased density while respecting the context of the neighborhood's one-story historic homes. White Stone Flats stands only 20ft. tall, while the city allowance for the property is 48ft. The project utilized an existing undersized dirt lot (infill project), considered unbuildable in the already-established neighborhood fabric. White Stone Flats is now seen as a case study to larger developers who often scrap and combine multiple parcels into larger swaths, erasing the existing neighborhood to achieve their financial objective. White Stone Flats reaches individuals who desire to live in an authentic piece of architecture without having the funds to build a custom project themselves.

After noticing that most homes in the neighborhood bear heavy window coverings to protect from the harsh Arizona heat, Hall designed a modern solution. The exterior shell of the building and the interior walls are constructed from specially fabricated foam-filled CMU blocks. To complete the project Hall utilized 42 different block types with two subtle but different surface treatments. The exterior side of the blocks is designed to reject solar heat gain while the interior surface reflects and amplifies natural light, creating a light-filled, welcoming living environment without the need for an abundance of exterior windows. “It was like a game of chess,” explains Hall. “The goal was to create a humble but intelligent project one that adheres to all existing zoning challenges while maximizing comfort on a, particularly small site. Understanding material behavior and selecting smart finishes are all moves on the chessboard. It’s a tantalizing challenge to dream of something so pure and bring it to fruition. From the time things exist on paper to the moments they take shape by actual human hands, we are continuously reminded of the intent of the project: Quality over Quantity.” 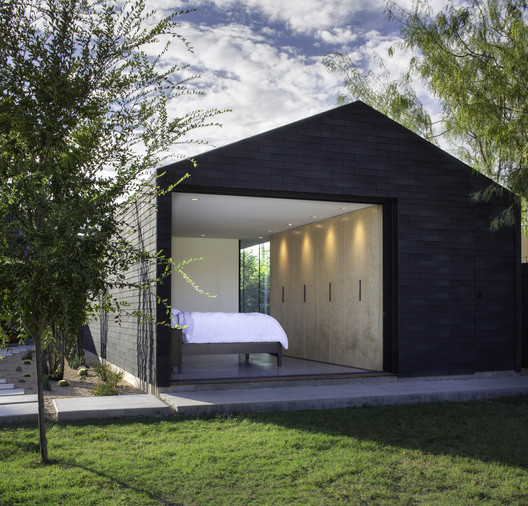 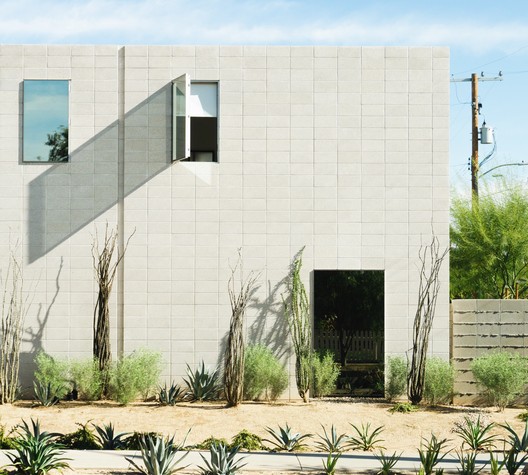