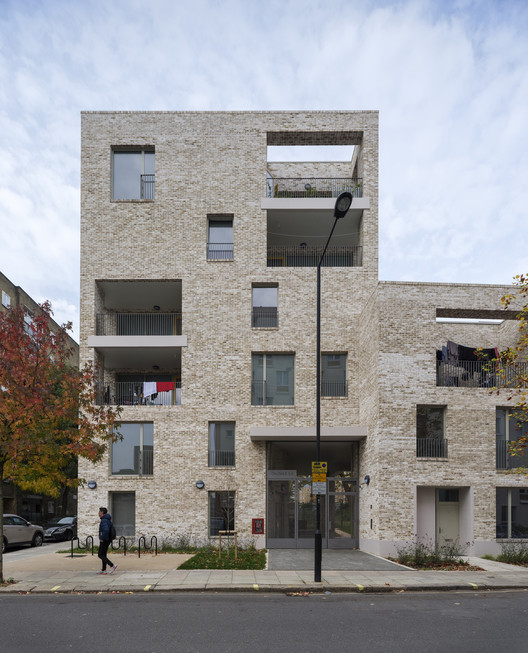 Text description provided by the architects. Commissioned by the London Borough of Camden, the two sites created twenty-one new high-quality homes for residents living in the path of the HS2 development in Camden. Thirteen family homes and a new community centre are located on Robert Street and eight new homes on Varndell Street, alongside sitewide improvements to the public realm. Replacing a former car park, Kirkfell is a new linear block which has been carefully positioned to provide a strong frontage to Robert Street; textured blond brick, cantilevered concrete balconies and a public colonnade below provide the building with a distinct public-facing appearance. The building steps back in section from five storeys along Robert Street, to two-storeys to the rear to minimise its impact upon surrounding residential units, and to allow for the creation of elevated deck access to the new maisonette homes.

The block defines a new public square, which with new planting and a chequered pattern applied to the ground surface, enhances an existing pedestrian route from Robert Street through to the historic Cumberland Market. Shared by new and existing residents, a semi-private communal garden has been created at the rear of the building, providing a safe place for residents to meet, socialise and play. The second site is located on a prominent corner where Varndell Street meets Stanhope Street. Split into two volumes, the new block provides visual cohesion to the estate’s eclectic mix of buildings: a six-storey tower containing five spacious apartments marks the corner of the site, while three, three-storey townhouses mirror the scale of an adjoining row of houses to the west. A double-height portico clearly signposts the main entrance and retains important visual connections from the street through to the communal garden beyond.

A playful arrangement of exaggerated, recessed balconies echoes the chequered facades of neighbouring buildings while providing passive surveillance to the communal garden below. Improvements to the garden include new seating and a play area, alongside the provision of allotments to encourage residents to take ownership of the space, and an orchard which creates a new focal point to space. New planting throughout the scheme not only increases the biodiversity of the area but enhances privacy to both new and existing residents living on ground floor spaces. Both buildings have been carefully designed to accommodate the preferences and housing needs of residents; all homes are generously planned to exceed current building standards, are dual aspect,s and have private balconies. Ample cycle parking an improved urban realm, within the estate helps to promote walking and cycling.