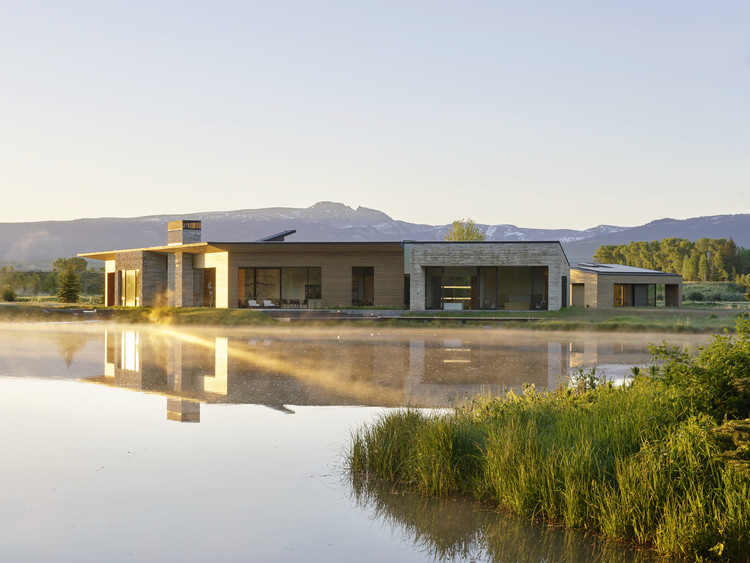 Text description provided by the architects. The history and splendor of Wyoming’s natural environment factor heavily into the design of Lefty Ranch. Nestled perfectly between the Snake River and valley proper — with panoramic views of the Tetons to the west and north and Gros Ventre mountains to the east — Lefty Ranch speaks directly to the pond it borders, as well as the big timber and historic corrals that dot its 35 acres. A dramatic approach teases views of the home through a sea of trees before carrying visitors over a bridge and onto the property. While most ponds in Teton County require a 50-foot buffer between home and water, this man-made body of water has the freedom to forego that restriction.

The resulting interplay, which flows from the living area to a partially covered heroic porch and eventually to the water’s edge, spotlights the deliberate connection between the home and its surrounding environment. The structure itself was crafted around an unconventional residential program. Rather than breaking the home into a series of smaller components housed in distinct pavilions, everything at Lefty Ranch is linked under a single roof that cradles an interior courtyard.

The shape is reminiscent of a horseshoe, entirely consistent in its roll from south to west. Inspired by a series of existing corrals along the northern edge, the house represents not only the history of the property, but the region as a whole. Here, the simple shed form has been mimicked and abstracted, providing deeply carved overhangs that create shelter and a signal for entry. The private program is comprised of offices, a gym, and the home’s lone bedroom.

The living room features a move known affectionately as the ‘pull tab’— a hole cut into the ceiling to provide patterns of light that trace the room during daylight hours. This design choice doubles as a clever formal move, where views from the south elevation provide undulating ridges and valleys in the building’s profile. Locally quarried limestone transitions from the exterior to an indoor fireplace, while the remaining materials palette (white oak, cedar siding, and glass) presents an elegant and restrained composition. With meticulous attention to setting and history, CLB has conjured a contextually inspired architectural gem that eschews coastal trends in favor of the singular voice of the modern American west.