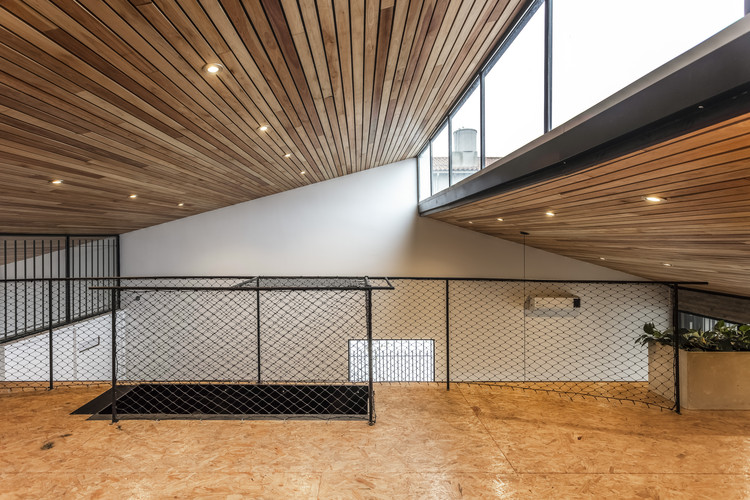 Text description provided by the architects. The house is located within the first ring of the conurbation, in the town of Banfield, Lomas de Zamora (one of the five districts with the highest population density in the Buenos Aires Conurbation). Nevertheless, the intervention takes place in a low- density residential area with a landscape that is commonly seen in the outskirts of the city.

The request arises with the aim of restructuring the typology in order to improve its living conditions and readapting  it to its inhabitants’ needs (a couple with two daughters, two jobs, two cars and several visits from friends).

Said house is a small chalet compacted in the ground floor, closely related to the suburbanization process, with several reforms over time, with no clear strategy and negative livability consequences. Some of them being the lack of natural lighting, a bedroom without ventilation/air circulation, a single and small bathroom, the lack of a place with shade, the movement between the bedrooms and the public area overlapped, among other constructive pathologies.

The proposal focuses on preserving the resistant exterior walls (30cm thick) and emptying the interior, getting rid of all the partition walls and suspended ceilings in order to take advantage of the available height that was hidden. Once the space was empty, a wooden device was used to fit the bedrooms, bathrooms, kitchen, closets and a mezzanine in the same architectural piece. This piece extends 2 meters outside the pre-existing limits of the house and a concrete slab with a roof garden  is added so as to generate a gallery towards the back. The second operation was a break in the roof so as to allow sunlight to enter and let the hot air out during summer.