The public art depot for the Museum Boijmans van Beuningen, designed by MVRDV is nearing completion in Rotterdam. Scheduled for opening in September 2021, recent images showcase the installation of the first of 75 trees on the roof garden. 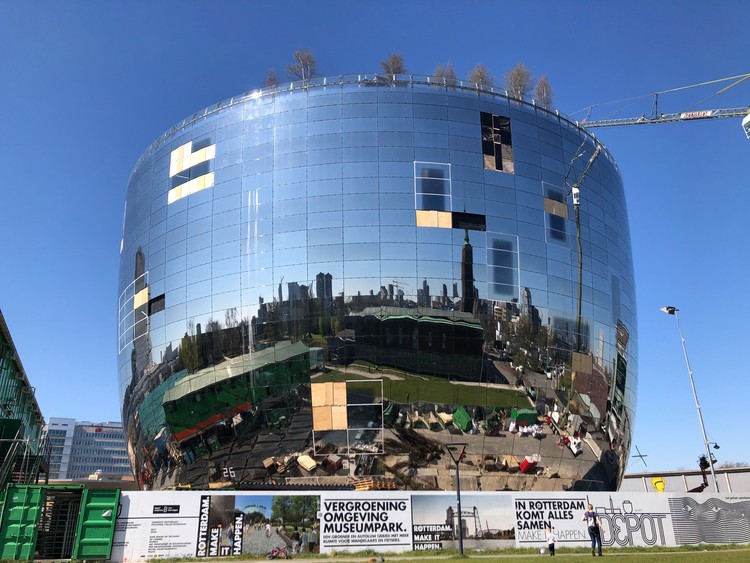 The first publicly accessible art depot in the world is located in Rotterdam's Museumpark, a public garden between the Museum Boijmans van Beuningen and the OMA’s Kunsthal art museum. Designed by MVRDV, the depot takes on a bowl-shaped structure. With all its curved mirror cladding already installed, reflecting both the park and the city, and its 75 large birches taking their position and creating the green rooftop forest, the project is nearing completion sooner than expected.

Designed in collaboration with MTD landschapsarchitecten from Den Bosch, the forest will integrate the Betula pubescens tree, “a soft birch that grows to a maximum height of ten meters and is highly resistant to the weather conditions on the roof”.

When Yves Brunier designed the Museumpark with OMA, I helped with the selection of the old trees […] Now that the birches are being placed on the roof of the Depot, the circle is complete; we are taking the park we removed to the top of the Depot and enlarging it. Soon, people will be able to take the express lift up, free of charge, and enjoy a spectacular view of the city at a height of 34 metres. -- Winy Maas, MVRDV founding partner.

Back in 2014, MVRDV won the competition to design the Depot Boijmans Van Beuningen, the first art depot open to the public, where people can watch the restoration process. Although the project can hold up to 151 000-pieces of arts, with exhibition halls and a restaurant, the depot, a circular 39.5-meter structure, has a footprint as small as the program allowed, in order to leave as much of the park intact as possible. 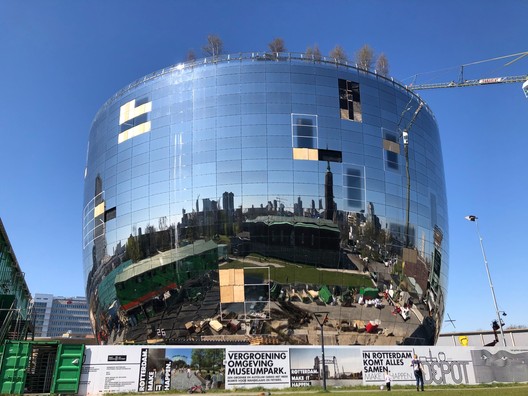