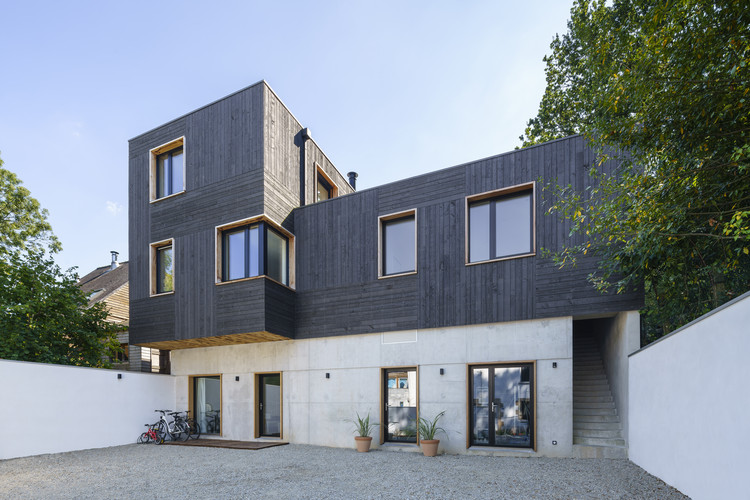 Text description provided by the architects. A narrow and very sloping facing north site, a quite small surface (564 m²) with a third of its ground classified as a natural area, all located in a preserved area in a mainly new-Breton style neighborhood... At first, the exercise seemed quite ambitious for a family who dreamed of a contemporary and ecological home in there. But, seduced by this exceptional wooded environment and the patrimonial character of the neighborhood, they asked an architect to take up the challenge!

This sloping site quickly led to establish a first semi-buried volume with a raw concrete facade. First it creates a real urban facade on the road side and it defines, on the other hand, a radical aesthetic that stands out from the other constructions around and from the higher volume. This first level on the ground floor, is used as a support for the garden. We reach the house through a mineral courtyard, on which an independent studio opens as well.

On this mineral base stands the second volume, made of a wooden framework, covered with a black wood cladding (Douglas fir with saturator), alternating vertical and horizontal patterns. This second floor on the garden level includes the master suite as well as the living room and kitchen. These open widely on the garden and are organized around the wooden terrace. Upstairs is the children's area, cantilevered on the courtyard side, composed of two bedrooms, a bathroom and an office space. A net, suspended above the living room, provides a space to play and rest for the children, while keeping a visual link between the two levels.

By its pronounced topography and its landscape qualities, the garden is integrated in the heart of the project and used a real setting for the house. These very large openings are offering framing and spectacular views, in particular on the surrounding century-old oaks. These openings are underlined by a natural red cedar frame contrasting both with the raw concrete of the base and with the dark cladding of the higher volume. The interior space, mostly white, is bathed in light and contrasts with the dark exterior of black wood.